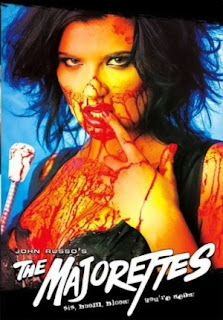 When I was a kid, my mom and I used to go to this all-you-can-eat buffet for lunch. As a rotund little bastard, I always appreciated that place. What I didn't appreciate was the method they chose for serving their food. There was a large, slowly rotating service tray loaded with various foods, everything from chicken tenders (my personal favorite) to meat loaf. Only half the tray was available at any time. The other half of the tray went back into the kitchen where it could be reloaded with more grub. And that was a real problem. 45 seconds too late and whoops! there goes the chicken tenders. You would have to wait. And wait. And wait. And sometimes the chicken tenders would come back 'round and they would be cold or gross. Time spent waiting for disappointing chicken is time not well spent.

I only mention this because Bill Hinzman's 1987 effort THE MAJORETTES is a buffet film, loaded with a fine selection of subplots that it lazily grabs from every now and then. It was marketed as a slasher film and for maybeeeee 25% of its running time, it is. Some weirdo in head-to-toe camouflage gear kills some slutty high school cheerleaders. That's a slasher film alright. But the detective looking for the killer is having a crisis of faith, a bit of character stuff brought on by the fact that the murders seems to have a religious element to them. The local Sheriff is kind of a prick while the local priest is kind of a fanatic. One of the murder victims was knocked up by the local drug dealer. A high school quarterback is having an existential crisis. His girlfriend is having commitment issues. Their friend has a wheelchair bound, stroke ridden grandmother whose German caretaker is planning on stealing her money. That caretaker has a son who is a creeper.

Who the hell was this movie made for?

The killer's identity is revealed at the 60 minute mark of this 92 minute film. At that point, THE MAJORETTES drops the slasher film angle entirely (as if it ever really embraced it in the first place) to focus on a kind of loose revenge/action plot involving the quarterback, the crippled grandma's granddaughter and the local meth head. I would actually recommend skipping the first 60 minutes of the film entirely and only watching this final half hour. It's the most ludicrous action shit since the ending of Steve Barkett's THE AFTERMATH, easily better than anything else this film has to offer.

Because honestly, the slasher stuff (you know, the reason you were watching this film in the first place) is AWFUL. I mean, absolutely awful. Victims are stabbed multiple times yet there isn't a drop of blood on them. In one laughable scene, the killer hides behind a glass shower door, the best place to hide if you want to surprise your would-be victim. Whenever the killer attacks, there is a loud sound effect of someone screaming “RAWRRRRRR”. Is that the killer doing that? Or was that just added in for comedic value? In THE PROWLER, it made sense for the killer to be wearing Army gear. There is zero reason for this film's killer to be dressing up like The Prowler.

I mentioned the “slasher experience” in my review of SLAUGHTER HIGH. This film fails at delivering that experience. It fails at basically everything, to be honest. It's just a lousy, cluttered, boring mess of a movie made by people whose chief claim to fame was that they all were once involved in making a good movie. Bill Hinzman, John Russo and Russ Streiner were all involved with THE MAJORETTES. They were also all involved with NIGHT OF THE LIVING DEAD. But even if George Romero had, for some reason, climbed aboard THE MAJORETTES train, I doubt it would have made much of a difference. It still would have been a total bomb.
Posted by David Grant at 1:35:00 PM
Email ThisBlogThis!Share to TwitterShare to FacebookShare to Pinterest
Labels: 1987, 31 Days of Horror 2017, Bill Hinzman, But not really, Horror, John Russo, Russell Streiner, Slasher film, The Majorettes, Vestron Video