NIGHT OF THE COMET 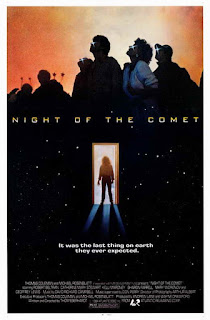 If I told you that NIGHT OF THE COMET was all about a couple of Valley Girls trying to survive in the zombie ridden, post-apocalyptic wasteland of 1980s Los Angeles, you’d probably imagine a riotous horror-comedy bash. Then you would watch the film and sigh. It wasn’t what you expected, was it? You were wrong right from your very first assumption. These Valley Girls were pre-CLUELESS Valley Girls, less vapid, less dumb, less prone to using the word “like” a billion times a second. And this wasn’t the Romero-style zombie apocalypse you’re used to. There were no herds of zombies or moments of grotesque flesh eating. Your assumptions were wrong on all counts. Hell, you probably even feel a little bit cheated.

NIGHT OF THE COMET is as low key as a post-apocalypse film can get. It starts quiet and stays quiet through damn near the entire film, with only a half dozen or so zombie encounters (two of which occur in a clever nightmare within a nightmare sequence). As this is a PG-13 movie, the bloodletting is practically non-existent and the gunfights are fairly tame. I know what you’re thinking. This movie sounds like a waste of time. Truth be told, it sort of is.

After most of Los Angeles is eradicated during a close encounter with a passing comet, Regina and her younger sister Sam roam the desolate city looking for survivors. Over the course of a few days, they meet a hunky dude named Hector, run afoul of gun toting infected thugs during an impromptu shopping spree, and eventually wind up in the clutches of a sinister group of scientists desperate to survive this whole unfortunate ordeal. That is pretty much all that happens in this film.

Thankfully, the film has two very large saving graces. Regina and Sam are instantly likable and practically overflowing with personality. The actresses portraying these characters, Catherine Mary Stewart and Kelli Maroney, respectively, have great chemistry together. Their dialogue is acerbic and quotable, their looks are nothing to sneeze at, and overall their characters are portrayed as strong, independent women, far from the usual sniveling cowards and victims that populate most post-apocalyptic movies.

That can probably be attributed to the low budget of the film. At just around $700,000, I doubt writer/director Thom Eberhardt was able to do everything he wanted to do with the film. The single action set piece, the clothing store shoot out, is quite simplistic and the climax at the sinister science labs is just kinda blah thanks to poor sets and drab lighting. I mean, hats off to Mr. Eberhardt for even attempting to create a low budget post-apocalypse film set in Los Angeles. That takes major balls, especially when your meager budget is matched by a meager shooting schedule. But I can’t help but think that NIGHT OF THE COMET would have worked better with a few more characters in a far less open environment. As it stands, there just isn’t a lot of story here and with a running time over 90 minutes, it begins to drag around the 40 minute mark.

I know a lot of people really love this movie and please, don’t get me wrong, I don’t think it’s a bad film. I just think it’s kinda dull. I honestly loved the characters of Regina and Sam (and a certain event late in the film, even though it turns out to be a fake-out, genuinely breaks my heart every single time), but the film just doesn’t do much with them. This is one cult classic that has me standing on the sidelines. I know perfectly well why all those people over there love it. I just can’t bring myself to walk over there and ask them if I can hang out, too.
Posted by David Grant at 1:44:00 PM
Email ThisBlogThis!Share to TwitterShare to FacebookShare to Pinterest
Labels: 1984, 31 Days of Horror 2017, Catherine Mary Stewart, Comedy, cult classic, Horror, Kelli Maroney, Night of the Comet, post-apocalypse, Thom Eberhardt, Zombie Film