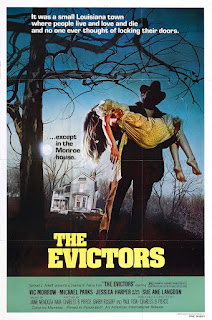 With only three days left until Halloween, I thought it would be nice to take a trip through the very small collection of big screen horror films from cult director Charles B. Pierce. Pierce’s horror filmography consists of four films, all of which are tied together by a central conceit. They are all, to one degree or another (or not really at all), based on true stories. THE EVICTORS was the third of the four horror films Pierce directed, followed only by a belated sequel to his 1972 directorial debut, THE LEGEND OF BOGGY CREEK. For that debut picture, Pierce created a style that could best be described as docu-horror, a mix of urban legend, fact and fantasy all told in the style of a large scale reenactment.

Unlike faux-documentaries or found footage films, both of which are designed to make you believe that the film you are watching is a real life document of events, the docu-horror asks you to believe only in the truth behind the events being depicted. Everything else is self-aware artifice. They are presented with on-screen narration that provides exposition, sometimes break the fourth wall, and contain scenes which depict events for which there were no eyewitnesses (ie. the murders committed in THE TOWN THAT DREADED SUNDOWN).

Pierce’s docu-horror style went on to influence everything from In Search Of… to all those terrible programs about “real life” ghost hauntings that air during the afternoons. The self aware nature is where the difference lies between the docu-horror and true crime films like ZODIAC.

THE EVICTORS, the second to last horror film Pierce would direct, is more true crime than docu-horror, even though there simply isn’t any evidence that this “based on a true story” story is based in truth at all. This is the odd man out in Pierce’s horror filmography (hence, we're looking at it first), with the director completely dumping his docu-horror style for the film. In fact, one of the only stylistic carryovers here is the period setting. Like THE TOWN THAT DREADED SUNDOWN, THE EVICTORS is set in the 1940s, seemingly for no other reason than Pierce wanted to make yet another period film.

THE EVICTORS follows a newly married couple, Ben and Ruth, as they settle into their new home in a small Louisiana town. At first, everything goes quite well, even if the townsfolk are a bit standoffish. But then one day Ruth finds a letter in their mailbox. It reads “I want you to move”. A traveling salesman tells Ruth all about the dark history of her home. Ever since the late 1920s, people living there have met sticky ends. Whether by accident or foul play, no one living in the home stays living for very long.

This revelation leaves Ruth a bit shaken, but Ben… well, Ben is preoccupied with his work. For a brief time, things return to normal. But then Ruth begins seeing a strange, tall man in a hat lurking around the house. Slowly but surely, she begins to suspect that someone wants her and her husband gone. Or worse.

This is a lovely and effective film. Overflowing with atmosphere, Pierce moves along several different sub-genre lines, from proto-slasher to home invasion to psychological horror to giallo-esque crime thriller. Unable to resist his docu-horror urges, a couple past events are dramatized here. Drenched in sepia, these two murder set pieces are great, creepy stuff. When we’re not indulging in side stories, the main action in THE EVICTORS moves at a swift, relentless pace. Lacking the melodrama and humor of Pierce’s past efforts, this is a lean machine, moving briskly from plot point to plot point with very little in the way of downtime.

There are moments here that recall THE UNINVITED, THE SHINING (which was released a year later), HALLOWEEN and THE NIGHT OF THE HUNTER. It feels like a traditional bit of classic horror cinema, a change of pace from Pierce’s more loosely constructed docu-horrors. If the film has any glaring problems, they all have to do with the mystery thriller elements that creep into the narrative around the halfway mark. Anyone paying attention will figure out just why the lovely Jessica Harper and her on-screen husband Michael Parks (both of whom are fantastic here) are being targeted. The resolution of the mystery thriller side of the proceedings is a bit repetitive (two characters basically meet the same fate) and the final scene of the film feels downright ridiculous. But overall, THE EVICTORS is a great little thriller and a true high point in the career of Charles B. Pierce.
Posted by David Grant at 5:33:00 PM
Email ThisBlogThis!Share to TwitterShare to FacebookShare to Pinterest
Labels: 31 Days of Horror 2017, Charles B. Pierce, docu-horror, Horror, Jessica Harper, Michael Parks, The Evictors, true crime