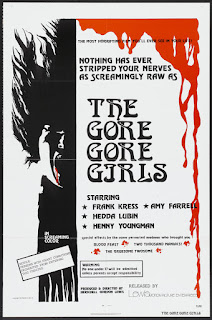 And it wasn’t just me who was bored by THE GORE GORE GIRLS, Lewis was too. You can see it all over the film, in every frame, in every ill-timed edit. Lewis was running out of patience and energy. This long winded tale of a black gloved psycho mutilating strippers feels more like a eulogy than a serious effort. Times had changed and so had the exploitation movie. The kind of cheap gore flicks that once filled drive-ins were now antiquated laughing stocks and Lewis, the man who turned splatter into gold, was all but a dinosaur.

THE GORE GORE GIRLS is filled with scenes of bored strippers shaking their tits while looking directly into the camera. The gore is still plastic bodies filled with hamburger and mannequin limbs with one end dipped in stage blood. The big cameo in the film is given to Henny Youngman, a man whose humor had aged as well as his body. 1972 had given us films like THE LAST HOUSE ON THE LEFT, TOWER OF EVIL, DEATHDREAM, RAW MEAT, THE FLESH AND BLOOD SHOW, DEMONS OF THE MIND, THE ASPHYX… The exploitation film had left Lewis behind years ago. His style of film simply could not compete with the more socially conscious (and therefore all the more immediate) horror films of the time.

THE GORE GORE GIRLS begins with a stripper having her face rammed repeatedly into a mirror. In order to solve the mystery of who has been leaving dead dancers all over the city, Nancy Weston, a reporter for the Globe newspaper, hires Abraham Gentry, a world famous private investigator. As our two leads do the bare minimum required to solve the case, the killer continues to mutilate women in various uncomfortable ways. Throats are slashed, eyes are ripped out, heads are mashed into a pulp. One woman has her nipples sliced off, the left one producing a stream of milk, the other a stream of chocolate milk. Her roommate has her head shoved into a bowl of hot cooling oil. In another scene, the killer smacks a woman on her bare ass with a meat tenderizer over and over, eventually killing her.

On top of the nasty, sexualized murders, Lewis has virtually every female character humiliate themselves for the pleasure of men. He has his female characters abuse each other. He turns them into money hungry opportunists and verbal abuse sponges. Knowing his depiction of women wasn’t going to go down well with the current women’s liberation movement, Lewis decided to double down. Never one to bow to political correctness, THE GORE GORE GIRLS features a bevy of feminist protesters, all of whom are clearly costumed to look more like men than women. After Nancy goes undercover with the feminists, she has a brief scene with Abraham in which she spouts feminist talking points like a brainwashed radical. Clearly, Lewis was trying to go out with an offensive bang.

Unfortunately, THE GORE GORE GIRLS fades like a fart in the wind. Much of the problem lies with the lead character, our Private Investigator, Abraham Gentry. Given his meticulously styled hair and his walking cane, I think we were supposed to find this character suave and charming. Every woman he comes across certainly falls for him. But truth be told, the guy is just a dick. A massive, obnoxious, borderline intolerable dick. I hated this character. I hated everything about him. I especially hated how the character would sometimes stop and turn to the camera to deliver some horrible pun. Stop it, goddammit. Just stop.

But virtually every character in the film is written to be an intolerable oaf. Nancy is shrill and demanding, and her constant attempts to seduce Abraham just made me hate her more. The various strippers we meet throughout the film are empty headed bimbos who exist only to fill the nudity quotient. The police lieutenant is a screaming jackass. The major red herring of the film was the only character in the film that I liked, an angry ex-Marine who used to bash in the skulls of corpses in Vietnam. Now all he does is sit at the end of a strip club bar smashing cabbages. I liked that guy, largely because he barely spoke throughout the entire film.

The murder mystery angle gets dropped two thirds of the way into the running time just so Lewis can film a short parade of strippers dancing topless. It was at this point that I zoned out and never really came back. I was done, done with this film and done with this week of Herschell Gordon Lewis movies. Truth be told, I enjoy the works of Lewis quite a bit. Like the director himself, I was just ready for a nice, long break.
Posted by David Grant at 2:42:00 PM
Email ThisBlogThis!Share to TwitterShare to FacebookShare to Pinterest
Labels: 1972, 31 Days of Horror 2017, Comedy, gore, Herschell Gordon Lewis, Horror, The Gore Gore Girls