THE WIZARD OF GORE 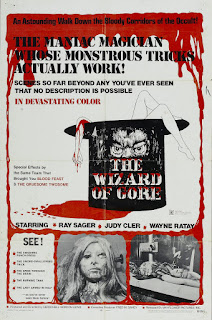 Attempting to think logically about Herschell Gordon Lewis’ 1970 pseudo-rubber reality gore flick THE WIZARD OF BLOOD would be to miss the point. I mean, this is a movie that begins with a stage magician ranting about solipsism for three solid minutes. Every second of the film is a put-on. Every major development is not to be trusted. THE WIZARD OF GORE is a film concerned with the illusion of reality and the plasticity of perception.

OK, so I’m making it sound a bit more heady than it actually is, but Lewis’ film really is a mind fuck, one that will probably fly largely over your head the first time you see it. It’s all about a stage magician named Montag the Magnificent. Montag is a bit of a firebrand, peppering his performances with loud speeches about certainty and the sham nature of media entertainment. His show starts a bit underwhelming, just the regular old tricks any amateur magician could pull off, but then things get interesting. Montag asks for a volunteer, a woman to meet him on stage for the old “sawing a woman in half” trick. A woman staggers up the aisle, clearly in some sort of fugue state. Montag has her lay down on a table before pulling out not just any old saw but a goddamn chainsaw. And then, with glee in his eyes, Montag really does saw the woman in half.

This is where THE WIZARD OF GORE complicates things. The sawing of the woman in half is just the first of many murders that will be carried out by Montag in the film, but are they really happening? The first time I saw the film I thought the tape in my VCR was warped or just fucked up. The editing of these scenes breaks continuity. In a later murder set piece, we see Montag place a metal spike to the temple of a young woman before nailing it into her skull. But then the film cuts and the woman is perfectly fine, completely untouched. A cut later and Montag is pulling out her brain. Another cut and the spike is clean through her skull. Another cut and the woman is fine. Another cut, another inconsistency, another cut, another break in the temporal flow of the scene.

After the so-called “magic trick” is done, the volunteer returns to her seat, completely unharmed. But we never see a woman regenerate her damaged tissue. We never see the piles of guts and rivers of blood reverse their flow, seeping and squeezing back into the body. As the film goes on, we learn that Montag is a very skilled hypnotist. Is that what is going on here? Is the sight of bodily dismemberment as much a ruse for the in-film audience as it is for us?

In a development that further complicates matters, all of the female volunteers are later found dead, their bodies mutilated in the same way they were mutilated on stage. One woman even falls over dead in a crowded restaurant, her stomach suddenly spilling out all over the carpet. How exactly is this possible? Why are we treated to red tinted, dreamlike sequences of Montag stealing the corpses of these women from the morgue? Our lead protagonist, a talk show host named Sherry, gets a spot of blood on her hand when she accidentally bumps into the stretcher one of these ex-volunteers is now lying on. That spot of blood will continually appear and disappear as the film goes along.

So what the hell does this all mean? I don’t know. The fact that the film ends with a kind of triple twist ending is possibly a good indication that THE WIZARD OF GORE isn’t meant to be some tightly structured, intricate bit of reality bending horror. The film is probably just meant to screw with your brain a bit while saying a few words about how the media can play games with your senses. No question is ever answered. No solution is ever given. It’s just weird. Deal with it.

This layer of surrealism sits on top of a well staged, but not well acted, bit of splatter cinema. It’s one of Lewis’ most memorable films, filled with graphic images, gaudy costuming, and clever bits of composition. Though his performance is equal parts wooden and hyperbolic with nothing in between, Ray Sager creates one hell of a memorable weirdo in Montag the Magnificent. Sporting a great Harry Reems mustache, Sager’s wild eyed performance has turned the murdering magician into a cult icon among splatter movie fans (the film would also go on to inspire scenes in productions as diverse as American Horror Story and THE FUNHOUSE). Unfortunately, he’s the only real bright spot among the cast (and believe me, that’s saying something) and as a result, THE WIZARD OF GORE is not as memorable as it could have been. Had Connie Mason and William Kerwin played the leads instead of Judy Cler and Wayne Ratay, I would probably rank this a spot or two higher on my personal Best of H.G. Lewis list.

Minor quibbles aside, I do think THE WIZARD OF GORE is a good time. It most certainly does not make for an easy first watch. It might take a spin or two for the film to effectively worm its way inside your brain. Once it does, well… it’s a nasty and confusing good time, not to be missed.
Posted by David Grant at 11:44:00 AM
Email ThisBlogThis!Share to TwitterShare to FacebookShare to Pinterest
Labels: 1970, 31 Days of Horror 2017, black comedy, Herschell Gordon Lewis, Horror, The Wizard of Gore