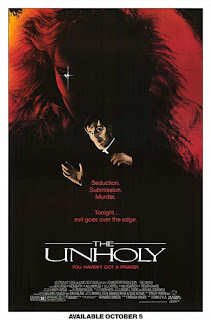 Camilo Vila's 1988 demon thriller THE UNHOLY is a bit of a mess. I would be very interested in reading the early treatments for this film, if only to see just what this film was like before the obvious studio interference. Vila's film is constantly at odds with itself. On one hand, it's a serious minded religious mystery thriller steeped in Catholic guilt and sexual repression. On the other hand, it's a silly sexploitation film-cum-rubber monster movie cheese fest. Now that kind of tonal cacophony can work wonders in the hands of an Italian filmmaker out to create a campy B-flick, but THE UNHOLY is played deadly straight the whole way through.

First, a quick plot synopsis. The film begins with a groveling old priest having his throat ripped out by a remarkably attractive woman in a see-through negligee. We then meet Father Michael, a quiet and reserved Catholic priest. After being thrown out of a 17 story window by someone who may or may not have been possessed by The Unholy, Father Michael is taken to the hospital where it is discovered that he didn't break a single bone in the fall. Hell, he doesn't even have so much as a scratch on him. This attracts the attention of two Church elders, a couple of old men who quickly proclaim Father Michael to be “The One”.

After being given his own parish (the same one we saw getting all bloodied up in the opening scene), Father Michael meets a pretty blonde stripper named Millie. She dances at a trendy Satanic nightclub run by a man named Luke. As the story progresses, Father Michael comes to believe that Luke and his fashionable Satanist friends might have had something to do with the string of dead priests at his parish. For his part, Luke denies all responsibility. The two men butt heads when Millie suffers a nervous breakdown and seeks shelter in the Church. It's obvious that Millie has a bit of a crush on Father Michael and Luke doesn't like that at all. Father Michael next turns to his

WAIT. Wasn't there a demon in this movie?

See, that's the problem with THE UNHOLY. There's a genuinely interesting dramatic murder mystery going on in this film. Remove the Penthouse Pet demon from the opening, replace the long claws with a straight razor, and BOOM! you have a lurid, giallo-esque thriller. And that's clearly what this film was intended to be before opportunistic hacks got their hands on it. Was there originally a demon killing priests in the first draft? I don't know, but if there was I doubt it was presented as a mute, might-as-well-be-fully nude calendar model who mysteriously turns into a floppy titted rubber dog monster for the finale.

It must be said that while all the overt horror elements like the demoness, the rubber monsters and the graphic gore were all clearly added in for simple commercial appeal, that stuff is actually pretty great. The bloody stuff is simply fantastic, especially the blood vomiting scene and the outstanding visual of an eviscerated corpse tied upside down to a crucifix. There's a great moment near the end where the film goes all EVENT HORIZON on us, giving us glimpses of torture and cannibalism. As this is a horror film meant for college aged males, the religious symbolism is pretty heavy handed, even bordering on unintentional comedy at times. Oh, and as for The Unholy herself… Wow. All that stuff is great.

It just doesn't belong in this movie. The best parts of THE UNHOLY are the parts that feel organic. Just watch the film. You'll be able to see the seams. I found myself thinking of THE EXORCIST III while watching this film. I remember reading Legion, the source novel for THE EXORCIST III, a year or two before the film was released. I was thoroughly excited for the big screen adaptation. While the majority of the film was great (because it was faithful to the source material) you could tell where the producers loudly proclaimed “this is borrrring” during the screenings. The loud, bombastic (and wholly ridiculous) ending to THE EXORCIST III was the product of a studio who didn't understand the strengths of their own film. The same thing can be said for THE UNHOLY.

I still think this is a good film. I really do like it quite a bit. That said, it's obvious that the original material had been molested worse than the priests in the film. Oh, the irony. THE UNHOLY is often maligned for being yet another rip-off of THE EXORCIST and yes, that would be true. But there's more to this film than you would expect from a simple 1980s horror cheapie. Give is a watch. I think you'll be pleasantly surprised.
Posted by David Grant at 1:02:00 PM
Email ThisBlogThis!Share to TwitterShare to FacebookShare to Pinterest
Labels: 1988, 31 Days of Horror 2017, Camilo Vila, demon, Exorcist clone, Horror, religious thriller, The Unholy, Vestron Video