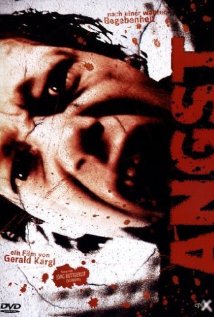 Loosely based on the exploits of Austrian mass murderer, Werner Kniesek, Gerald Kargl's 1983 shocker ANGST appears, at least on the surface, to resemble an Austrian HENRY: PORTRAIT OF A SERIAL KILLER. It's tempting to just leave it at that. But despite their surface similarities, Kargl's film stands out from McNaughton's classic in that it doesn't actually tell a story. It isn't interested in psychological depth or character arcs. It doesn't have a moralizing bone in its body. This isn't really a story about a murderer. It's a film about murder. It doesn't want us to condemn or empathize. It doesn't try to frighten or offend. All it wants of us, all it asks of us, is to see.

Sure, we get plenty of voice-over narration from our unnamed killer detailing his plans, his desires, his anger and self-absorption, but it's all white noise. Unlike Gaspar Noe's I STAND ALONE, a film very much influenced by ANGST, the running monologue adds virtually nothing to the experience. Noe's bitter, angry Butcher comes off as a megalomaniac trapped in a dime-store body, spouting poisonous rhetoric as if he were reading from some dark dystopian manifesto (think Notes from Underground as written by Ted Bundy). The violence of Noe's film lies almost completely within that rhetoric. For an anti-polemicist like Noe, the words the Butcher speaks (and the attitudes he espouses) are far more dangerous than any unsheathed knife.

The plot, as it were, concerns an unnamed man being released from prison. He tells us that he has spent the better part of his life locked up. His first incarceration was the result of an assault on his mother, the second was the result of an attempted murder of an elderly woman. He only has one thing on his mind and that is to commit another murder. The man visits a cafe, eyeing up two teenage girls. Knowing full well that there are too many witnesses around, he instead plans on strangling his cab driver, but bolts when she becomes suspicious. He finds a secluded home and breaks in, discovering a mentally and physically disabled man. Soon enough, the man's mother and younger sister arrive home. That's when the murders begin.

ANGST attempts to be both a stylized art film and a serious exploration of the act of murder. While it never quite reaches the dizzying heights of dramatized madness as the final 15 minutes of THE TEXAS CHAINSAW MASSACRE, the visual approach Kargl has put in place here (the film is all Dutch angles, quick edits, busy, gliding camerawork and indulgent uses of SnorriCam) does manage to disorientate enough to be effective. The violence, when it comes, hits hard, with one murder in particular (a protracted stabbing that ends with a sickening attempt at light cannibalism and some implied necrophilia) being quite difficult to stomach. This is the one area where I wish Kargl would have set aside his bag of tricks. ANGST takes the realistic approach to its scenes of violence, much more TORN CURTAIN than PSYCHO. The killings are protracted and painful, both for the victims and for the audience. These scenes did not need to be as hyper-stylized as they are, even though part of me is glad that I had some kind of distancing mechanism between me and the film during those moments.

Because ANGST is a feel bad kind of movie. It really works its way under your skin. It's the anti-A SERBIAN FILM, a movie that is loaded with outrage, but plays it all like some sick joke, robbing it of all its power in the process. ANGST, however, is the real deal. For much of the film, I sat in slack-jawed awe, completely engaged with every grimy moment that went by. Much of the films power is derived from the performance of Erwin Leder as the killer. It's a go for broke performance without a shred of self-preservation. There's a lot of Klaus Kinski in Leder. Both men are all eyes and jawline, and Leder sells the film completely in a brilliantly nuanced performance that should, if there were any justice in the world, be sat right up there with Michael Rooker's Henry on the list of all-time great movie psychopaths.
Posted by David Grant at 10:06:00 PM
Email ThisBlogThis!Share to TwitterShare to FacebookShare to Pinterest
Labels: 31 Days of Horror, Angst, Gerald Kargl