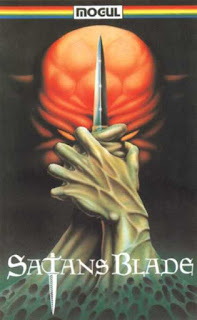 SATAN'S BLADE is the second horror movie I've seen this week that uses a bank robbery as a segue into a larger story. In the case of THE CHILLING, it was a weirdo zombie story. Here, it's a slasher. We start with two armed robbers stealing 50k and shooting two bank tellers. The bank robbers head back to their hideout, a winter lodge somewhere in Ski Country, USA. Turns out, our robbers are not men, but two lovely ladies, therefore we get a bit of requisite nudity before Bank Robber 1 shoots Bank Robber 2 dead. And just when you think things couldn't get more convoluted, along comes some mysterious third party to literally back stab backstabbing Bank Robber 1.

The very next day, two loads of vacationers come to town. Despite the fact that a double murder happened in the lodge just 24 hours prior, the vacationers decide to stay and get in some skiing. The first group consists of five of the most unconvincing college age chicks you've ever seen. The second group consists of two married couples. They hear of an urban legend, the tale of a murderer who lives in the nearby lake, a killer controlled by Satan. Any reasonable person would be majorly freaked out by the unsolved double murder that just happened at the very lodge they're sleeping in, but these folks seem more spooked by AquaDahmer than anything else.

Well, guess what? They should be freaked out, because about halfway through this interminable bore of a film, a gloved maniac starts slicing and dicing everyone he (or she) comes across. Is it the maniac in the lake come to ruin everyone's weekend? Or is it someone after the 50k our late Bank Robbers stashed in the heating vent of one of the cabins?

Do you folks at home know?

Spoiler, it's a bit of both.

SATAN'S BLADE is a tale of two halves. The first half of the film is simply dreadful. The acting is ungodly, the writing is unbearably bad and the direction is about as lively as Bank Robber 2's corpse. This is one of those films where characters talk about doing things we never actually see them do. I know these people had fun skiing, but I never actually saw them ski. They talk about things that happen outside of the periphery of the film, like what they were doing days before the film started. They seem like people with lives and interests and aspirations, but on screen they're just… there. We never get to know any of them well enough to even know which of these idiots is the lead character. There is a bit of a romantic complication going on with one of the girls taking an interest in one of the husbands, but that's as far as the film goes in providing us with any meaningful character action or drama.

But then the second half of the film kicks off. The slasher action of the film is satisfying in a purely visceral way. SATAN'S BLOOD doesn't try to make its violence cinematic. It tries to make it painful. Characters don't drop dead after being stabbed once or twice. They writhe around in agony. Despite the shoddiness of the effects work, the way the violence is handled makes the film strangely disturbing, even a bit nauseating at times. It's all brutal stabbings, too, with only one scene of “cinematic” violence, the killer chucking the knife 30 feet through the air, embedding the blade into the back of a fleeing woman. SATAN'S BLADE trades cinematic violence for the more realistic kind.

This brand of realistic violence was practically gone by the time this film was released in 1984. Hell, that same year saw Jason lift a dude in the air using a harpoon gun he unceremoniously rammed through his groin and crushing a man's skull against a bathroom wall. A NIGHTMARE ON ELM STREET vomited Johnny Depp's blood supply though a hole in a bed. Those scenes are brutal, sure, but they're too cinematic to be really effective. SATAN'S BLADE does exactly one thing right. It shows that you don't need gimmicky violence to get audiences to say “ouch” or “ick” or “I'm writing my Congressman”.

But unfortunately, folks, that is quite literally the only thing SATAN'S BLADE does right. It's final reveal is laughable, a bit of supernatural hokum that sends the film off on the wrong note. It does go a step further than most slasher films though. Not a single protagonist is left alive by the time the credits roll. They're all dead, as dead as the careers of everyone involved with the making of this film.
Posted by David Grant at 8:44:00 PM
Email ThisBlogThis!Share to TwitterShare to FacebookShare to Pinterest
Labels: 31 Days of Horror, Can you believe this got a blu ray release?, Satan's Blade, Slasher film