THE DEVIL RIDES OUT 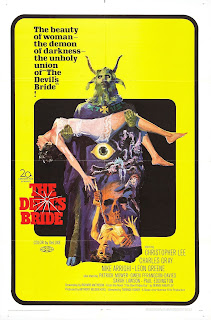 THE DEVIL RIDES OUT boasts a pretty terrific roster of talent, with Christopher Lee and Charles Gray in front of the camera, and Terence Fisher and Arthur Grant behind it. The source material comes courtesy of the great Dennis Wheatley, here adapted for the screen by Richard Matheson. All the pieces are in place for a good, spooky time. But THE DEVIL RIDES OUT isn't interesting in frights. It's interested in thrills. What emerges during the near 90 minute running time of the film is a tale of adventure, not a tale of terror.

In many ways it resembles one of Hammer's Dracula films. The Satanic antagonist is after a young woman, can hypnotize people at will and meets his end in front of a large holy cross. This is, by the way, one of the great joys in watching THE DEVIL RIDES OUT. Lee, iconic for playing the Prince of Darkness, is here cast in the Van Helsing role of a well-mannered and brave pseudo-mystic, the only one capable of stopping the evil before it can succeed with its nasty plans.

But I'm getting ahead of myself a bit. Perhaps a simple synopsis is in order?

Lee plays the Duc de Richleau, or as his friends call him, Nicholas. He is in town to visit with his two friends, Rex and Simon, though no one has seen Simon for quite some time. He's become a bit of a recluse, it seems, but that doesn't stop Nicholas from stopping by his home one evening. Simon is having a party with his new friends, the members of an exclusive astronomical society. As Rex flirts with the pretty Tanith, Nicholas takes a closer look at the people attending the party, especially Mocata, an intimidating chap with piercing blue eyes and a bad attitude. Putting two and two together, Nicholas comes to the conclusion that the people at the party are all Satanists, a suspicion confirmed when he discovers a basket of chickens in the upstairs observatory. Nicholas knocks Simon out and the three friends make a run for it.

And that's basically the first ten minutes of the film. From that point on, THE DEVIL RIDES OUT hurdles along at a breakneck speed. There's very little downtime during the first half of the film, just a relentless barrage of exposition and light action set pieces, all culminating in a rescue at a Satanic ritual. Up until that rescue scene, you could have mistaken THE DEVIL RIDES OUT for a serious film. But it's difficult to hold that opinion once the devil shows up (just a man with hairy shoulders wearing a goat mask, I'm afraid). “Oh my, Lucifer himself!”, you say? Yes, indeed, the devil himself makes an appearance, only to literally explode when Rex hits him with a crucifix.

The final half of the film dives straight into the bowels of camp, with plenty of corny hallucinations, a young girl threatened by a giant spider, Christopher Lee spouting gibberish to ward off evil, deus ex machinas left, right and center, and a final battle that looks and feels like the production just ran out of cash. At one point, the Angel of Death shows up riding a black horse. The horse rears up. Then it rears up again. And again and again. And then you think “hold on… are they just playing the same five seconds of footage over and over of the horse kicking the air?. Well, yes. Yes, they are. Then the Angel of Death pulls off its hood to reveal a laughably fake plastic skeleton head, Lee screams more gibberish and POOF end scene. Oh, and at one point, a smiling black man in what looks like an adult diaper materializes on screen in a cloud of fog because why the hell not?

Look, let's not mince words here. This movie is fucking great. What? Expected me to say something different?

In fact, THE DEVIL RIDES OUT is an absolute blast of a film and a must watch around Halloween time. It is a total celebration of witchcraft tropes and hokey Satanic horror. There are so many wonderful moments here, like when our not-so-intrepid heroes defeat a giant spider by splashing it with a little water or when God shows up to save the day by reversing time, a la SUPERMAN: THE MOVIE. I'm really not sure if anyone involved with this film meant for it to be taken seriously (even though both Lee and Charles Grey play the material exceptionally well), but it's difficult to imagine that anyone ever could. It isn't scary or disturbing. It's just a massive load of fun.

And who doesn't like fun?
Posted by David Grant at 9:59:00 PM
Email ThisBlogThis!Share to TwitterShare to FacebookShare to Pinterest
Labels: 31 Days of Horror, Hammer Films, The Devil Rides Out