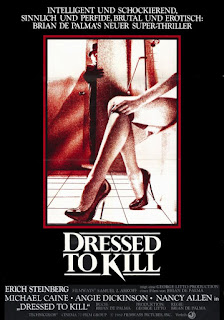 Conversations about Brian De Palma almost always descend into conversations about Alfred Hitchcock, De Palma's most recognized inspiration. I can understand why. Hitchcock is clearly De Palma's thematic muse. Most of his films trade in the same thematic elements as many Hitchcock films (murder, madness, fear of emasculation, guilt, etc), but when you look at the two visually, there's very little to tie the two together. Hitchcock, among other things, was a master of economy and visual compartmentalization. There's nary a wasted frame in any Hitchcock film. Each frame is loaded with visual information, both contextually and subtextually. You can lay many claims against Hitchcock. Indulgent is not one of them.

Much of that can be laid at the feet of the Motion Picture Production Code. PSYCHO, Hitchcock's largest challenge to the Code, pushed the boundaries as far as they could be pushed in 1960, but the director still had to hold back. He still had to suggest through careful composition what could not be plainly put on screen. Janet Leigh's murder is all smoke and mirrors. Norman could be a madman, but not a transsexual. By 1980, those restrictions had long been removed. De Palma could show his killings in explicit detail AND give us a murderer that was both mad and non-heteronormative.

There's an argument to be had about whether or not the open borders of explicit violence and sexuality that came in the wake of the Hays Code demise helped or hindered the artistic growth of cinema. That's certainly not an argument I'm going to get into here. I'm only going to say that Hitchcock's methods of filmmaking, popular and important as they are, were largely perverted by the sudden appearance of graphic on screen violence and sexuality. Back in the 1960s, Hitchcockian meant “like Hitchcock”, films that played by the same rules as NORTH BY NORTHWEST or STRANGERS ON A TRAIN. Once the Hays Code film censors were put out to pasture and the new generation of boundary pushers came along, Hitchcockian simply meant a film about murder, madness, sex, yadda yadda. Everything else like visual composition or economy of storytelling was brushed under the rug and forgotten.

That's why I say that De Palma is merely thematically inspired by Hitchcock. His filmmaking bears none of the same controlled and careful artistry, instead indulging in grandiose, almost masturbatory exercises of pure style. Of all the American filmmakers that came to prominence in the 1970s, De Palma is the most European. He's New Wave, not Hitchcockian. His films are filled with split screen compositions, sweeping camerawork, sequences that are overlong by design, incessant visual motifs, and are defined by how non-standard they are in comparison to the usual mainstream fare. For someone only familiar with American film, De Palma might seem like a bit of a reckless artiste. But for those of us more heavily invested in European cinema, he's a nice breath of fresh air from your usual American 1970s fake enfant terrible.

But onto the matter at hand.

DRESSED TO KILL tells the story of Kate Miller, a 50-something bored housewife whose husband leaves her unsatisfied, both emotionally and sexually. She meets a man during a trip to an art museum. They have sex. On her way out of the building, Kate is slashed to death in an elevator by a tall blonde woman in a black slicker. She is found by Liz, a high priced call girl. A police detective pressures Liz, believing her to be either guilty or complacent. Liz is then targeted by the killer, almost losing her life in a brief struggle aboard a New York subway. She is rescued by Peter, Kate's teenage son. He's been doing some investigation of his own, coming to the conclusion that the killer must be a patient of Robert Elliott, a psychologist his mother was seeing before her death. Together, Liz and Peter begin tracking down the murderer.

It all sounds very giallo, doesn't it? There's an awful lot of European thriller cinema lurking beneath the surface of DRESSED TO KILL. Much of that is purposeful, I imagine, as De Palma was clearly a fan (this is the man that directed BLOW OUT, a clever knock on Antonioni's masterwork BLOW-UP). Whether he soaked up so much giallo purposefully or just through creative osmosis (the underground or independent film scene in the 1970s saw an influx of European genres films, many of which became popular cult oddities), I can't say. What I can say is there is an awful lot of Argento in this film. There's also a striking similarity between Kate's elevator murder and the opening murder set piece of Giuliano Carnimeo's THE CASE OF THE BLOODY IRIS (and to be fair, the giallo filmmakers would return the honor; Fulci's NEW YORK RIPPER, among others, is clearly heavily influenced by this film).

I could go on and on about how filled the film is with staple giallo tropes, like close-ups of eyes or unusual attention paid to typical fetish staples like shoes, leather and straight razors. The film is a North American giallo through and through. It's also a weird, black comedy and an even weirder experimental film. It's a movie about hedonism, both the condemnation of it and the celebration of it. It's a movie about hatred of female sexuality that is reframed in its final act into a film revolting against the idea of patriarchal control of female sexuality. DRESSED TO KILL is a slippery beast to catch, a film that seems to be about a lot of things, most of them contradictory, all at one time. It's tough to know where exactly you're supposed to stand with it or what side you're supposed to line up on in order to be reading it correctly.

Am I supposed to be applauding its more Puritan side or its more hedonistic side? Is this a feminist film or an anti-female empowerment film? The killer is a transsexual, which in 1980 was still considered an abnormal perversion, but instead of blaming the transsexual element for the murders, it flat-out lays the blame on the heteronormative structures and stringent societal gender roles for the violence. We have a plucky, resilient woman as our amateur detective yet the film wastes no time in reminding us that she's also a no good dirty whore. Twice Peter and Liz spend the night together, but the film denies us the usual young man/older woman sex scenes that people expected of films like this in 1980. Whether this is all planned moral ambiguity or just De Palma fucking with our sense of direction in an exploitation film, I don't know, but what I do know is that it works remarkably well.

And I haven't even touched on the beauty or the visual punch of the film. It's stunning, for sure, but its the one element of DRESSED TO KILL that I'm not enamored with. For as remarkably daring as it is, I could have gone without the 20 minute dialogue free museum seduction-cum-murder set piece. It's a stunning bit of work, make no mistake, but for me the most interesting elements of DRESSED TO KILL lie in the aforementioned moral ambiguities. That's what is left to chew on when the awe of the films visuals die off. The mixed messages and convoluted stances the film takes are what keeps me coming back to it. It's what makes me feel like a participant rather than a mere spectator. DRESSED TO KILL can be a tough nut to crack, but it's so damn delicious that it is well worth the effort.