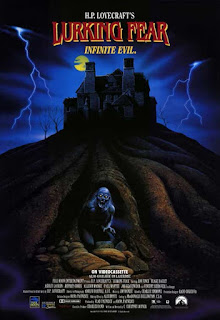 There was a small cottage industry in the late 80s/early 90s built on the backs of shoddy Lovecraft adaptations. There's just something about Lovecraft that does not translate well to motion pictures. Maybe it's the fact that Lovecraft is purposefully obtuse with his language. When you mix that in with his patented “dude going nuts” story line, you have a piece of fiction that simply clashes with the idea of tying it all to one singular vision. It's rare that we get a full-on description of any of the eldritch beasties his protagonists stumble upon and even if we do, it's difficult to know how truthful that account actually is. It's coming from a dude going nuts, after all. One has to wonder if Lovecraft himself even knew what the hell he was writing about. I wouldn't be surprised to learn that the creator of Nyarlathotep couldn't draw an accurate picture of it on paper.

But this is the movies, damn it, and we need to see it and see it good. This reduces the nightmarish creatures of Lovecraft's fiction into rubber suit monsters or badly animated puppets. Lovecraft is too weird, too abstract, too damn vague to ever really translate to the screen. So what we get are not so much “Lovecraft adaptations”, but rather “Lovecraft inspirations”. Some of them are quite good, like RE-ANIMATOR or FROM BEYOND. They're good films inspired by Lovecraft's stories, but as adaptations… well, they fail horribly.

So it's best to go into any Lovecraft adaptation with a full understanding of what you're getting yourself into. Expect the settings to be different. Expect the plot to be a mishmash of several stories, not just the one the movie is named after. Expect the film to be filled with violence and gore, despite Lovecraft rarely indulging in either. Expect rubber monsters. Lots and lots of rubber monsters. Oh and nudity. Because we all know how much Lovecraft loved sex.

Now that we got that out of the way, here's LURKING FEAR, a 1994 *ahem* adaptation of Lovecraft's 1922 short story. The overall gist is the same. Monsters living underground rise up during storms to terrorize a secluded village. As if that wasn't enough, writer/director C. Courtney Joyner tosses in a bit of The Shadow Over Innsmouth for good measure. And a bunch of violence and gore. And rubber-faced monsters. No sex though. You'll have to get your rocks off someplace else, unless you're really into poorly choreographed mud wrestling.

John Martense (played by Blake Bailey, aka the guy who looks distractingly like Sawyer from Lost) has just been released from prison. He tracks down a friend of the family, a crook named Knaggs. Knaggs informs John that there's a body buried up in the Leffert's Corners graveyard. Inside the hollowed out chest cavity of the body is a whole lotta money, an insurance plan set up by John's now deceased crook of a father. So off sets John to collect the dough. Unfortunately, three gangster-types (one of whom is played by the great Jon Finch) are in pursuit, also looking for the money.

But even more unfortunately, the town of Leffert's Corners has a rubber-faced monster problem. After her sister was nabbed a few years back, a pistol-packing hottie named Cathryn (the always great Ashley Laurence) has come back to settle the score. Cathryn has assembled herself one hell of a team to deal with the pesky monsters, a team that consists of a pregnant woman (she's the bait, by the way), one local, a nervous priest and a drunk doctor played by Jeffrey Combs. Not much of a team, it turns out, but you know what this team has a lot of? It isn't brains, brawn or balls. Nope, they have a fuck load of dynamite and it's wrapped all over the place. When the ghouls ascend from beneath the town church to go a huntin', they'll be shambling right into Armageddon.

Shame then that John shows up, the gangsters show up, the monsters show up, people fight, hostages are taken, graves are dug up, money isn't found, floors collapse, fist fights happen, some people get shot or eaten or both, bug-eyed rubber-faced monsters walk around like zombies, and the whole damn movie just tumbles into inanity.

I say “shame then” because I actually really liked the set-up for the film. I would have preferred the whole monster thing to have happened a bit later, preferably after John's character and situation had been set up. There's a lot of fun to be had when characters just stumble into confusing, dangerous situations they have to quickly adapt to. FROM DUSK TILL DAWN did that thing really well. But we already know about the monsters from the first minute on and the way the film moves between the two story lines (the preparation at the church and John's journey to Leffert's Corners with the gangsters in pursuit) doesn't leave us with a lot of time to gain our footing in the narrative. I mean, who is our main protagonist here? Is it the woman whose sister was killed during the first five minutes or is it John, the character who is given voice over narration duty and introduced shortly before the 10 minute mark?

What I'm trying to say is that the two sides of the narrative don't exactly mesh well together. Characters from the gangster plot thread never feel like they're fully invested in the monster plot thread and vice versa. We have the gangsters constantly venturing outside to dig up the money even though they know monsters are coming out of the ground to grab them. The characters in the monster plot thread just have to stand around and kill time until someone can manage to wrestle a gun away from the gangsters and hold them hostage. Then the gangsters turn the tables and the going outside bits happen again. Then the tables turn again and we get some monster prep. It's the seesawing between the two that saps most of the energy from the film.

And that really sucks because LURKING FEAR is the right kind of cheese for a low budget horror film. It's got a great cast (I already mentioned Laurence, Finch and Combs, but Allison Mackie, Paul Mantee and Vincent Schiavelli are also on board), ridiculous monsters, the kind of last minute plot twist that has you frantically facepalming and more corny fistfights than a whole bucket of Cynthia Rothrock movies. I liked enough of the film to stay with it until the end, but as whole, it's terribly underwhelming. And that, more or less, sums up 95% of every direct-to-video Lovecraft adaptation ever made.