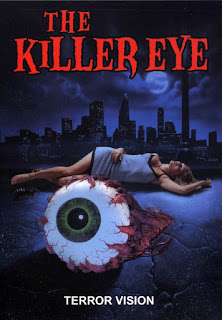 Brought to you by the master of softcore homoerotic schlock, David DeCoteau, THE KILLER EYE is about a mad scientist trying to discover the mysteries of the 8th Dimension. He's developed a nifty little bit of tech, a kind of inter-dimensional telescope that allows someone to see through the veil of time and space. To aid this, he's created a special kind of eye drop, but it's only lead to blindness in his test subjects. A breakthrough of sorts comes when the mad scientist hires a young, blonde male prostitute. He's too busy bickering with his sex starved wife to notice that his new test subject is actually responding well to the eye drops. The prostitute checks out the telescope and BAM drops over in agony. The test is successful. He's seen the 8th Dimension. Unfortunately, the 8th Dimension has also seen him, causing the young man's eye to bulge out of his skull like a balloon, eventually popping out completely, crawling away in the darkness.

Now that's a nice set-up for an enjoyable B-movie, but then the film descends into a long stretch of laughable softcore porn, with the sex starved wife (played by Jacqueline Lovell) trying to get busy with two brain dead stoners that look and sound like they just crawled out of an Eli Roth film. The giant, intelligent eye makes its way around the small studio apartment this film is set in, blasting people with its magical eye lasers, and bizarrely molesting both Lovell and her sexy neighbor. There's a weirdo living in the attic that seems to be doing a Beetlejuice impression during the entire film, a subplot about the mad scientist wanting to breed his wife and the eye monster, and the whole thing just ends when the eye monster decides it can't handle people shining flashlights at it anymore.

It's horrible. It's absolutely horrible.

I'm in kind of a double bind here. Because I don't have anything nice to say about this film, but anything I do say will probably just make you want to watch it. There's some live action, softcore tentacle porn here. There's a decent amount of female nudity for the guys (one such scene is in slow motion so you can have a few more seconds of public hair to gawk at) and a decent amount of beefcake guys in tight underwear rubbing their pecs for the ladies. The optical effects wouldn't feel out of place in an Ed Wood Jr. movie. Every character is a walking stereotype and saddled with inept post-production dubbing. This film should have been enjoyable on a so-bad-it's-good level. But it's just soooo awful that I could barely make it through its 66 minute running time (padded out to feature length thanks to a six minute credit sequence).

The only positive thing I can say about it is that it stars Jacqueline Lovell. She's fucking gorgeous and a far better actress than she gets credit for. She unfortunately fell into the same trap as Debbie Rochon, Tiffany Shepis and Erin Brown, three actresses whose talents are unfortunately outweighed by their willingness to disrobe for cheap-o movie directors. They'll never get their dues, relegated to simple, crappy bullshit movies. And that really, really sucks, because Lovell, while not Oscar material, had the chops and the looks to be more than just a cult oddity or masturbation fodder. She makes THE KILLER EYE tolerable whenever she's on screen.

But that's it. That's the only good thing I can say about this film. Just don't bother with it.
Posted by David Grant at 3:20:00 PM
Email ThisBlogThis!Share to TwitterShare to FacebookShare to Pinterest
Labels: 31 Days of Horror, Full Moon Entertainment, The Killer Eye