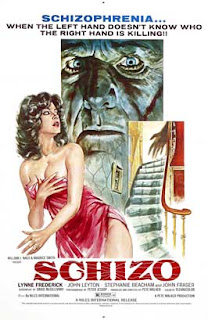 Samantha is a professional ice skater recently married to the charming Alan. She has a pretty good life, all things considered. Slight problem... a man named William Haskin, recently released from jail after serving a long prison sentence for the murder of her mother, is hot on her trail. He follows Samantha everywhere she goes, even showing up at her wedding reception, slipping a bloody knife onto the cake tray. He breaks into her home on several occasions, desperately trying to attack her. Or is he trying to attack her? Is Haskin the one killing all those women in town? And why doesn't Samantha recognize him? Who is really insane here, Samantha or Haskin?

Well, you'll know the answer to that question within the first 15 minutes of SCHIZO. If you have ever seen a horror film before, it won't be difficult to figure it out. In fact, half of the problem with SCHIZO is that it's so routine you'll see every single twist and turn coming from a mile away. That's always been a problem when you go backwards through the horror genre. Films from the 1970s had all their successful plot twists and iconic set pieces regurgitated throughout the 1980s. The 1990s then took everything great about the 80s and did it all over again. I often wonder what it must have been like seeing PSYCHO for the first time in 1960. Must have been wonderfully shocking, to say the least. Shame then that the shower scene became the norm in horror films and the resolution of the tale became the default motive. Parents, sex, trauma, psychosis, murder, rinse and repeat. Imitation has turned PSYCHO into a redundant relic for today's younger viewers just tuning in for the first time.

But I have a feeling that even if I could wipe all 37 years worth of life experience and movie watching from my brain, I still wouldn't have found SCHIZO to be anything more than a slightly amusing time waster. It's very, shall we say, leisurely paced. It has a relatively small cast of characters confined to a relatively small amount of locations going through a relatively small amount of actions. Much of the film plays out like this: Samantha sees Haskin, has a freak out, calls the cops or her husband, Haskin is nowhere to be found when help arrives. That's basically it. Haskin is given so much access to Samantha right from the start that you never get a proper escalation of danger. There's really no reason the rest of the film needed to go on after Haskin's first encounter with Samantha (well, the film DOES offer an explanation at the end as to why Haskin continually pops on by and then runs away, but it's mostly just hand-waving). It could have just ended there. But this is a feature length film we're talking about, so bring on the padding.

And this film is padded to death. It only starts getting really interesting around the half way mark, which in a movie just shy of two hours is a long time to wait. We begin seeing possibly signs of attraction between Alan and Beth, a friend of Samantha's. Murders begin happening with more frequency. There's a whole psychic subplot thrown in to give the film a bit of supernatural flair. All that stuff is great because it forces the film to break the routine it settled down in for close to 60 minutes. Some really good stuff is buried in that final half. The DEEP RED-esque psychic reading scene is a corny classic, with the psychic channeling Samantha's murdered mother as her eyes go white and threaten pop out of her skull. Later, the psychic has her skull bloodily bashed in with a hammer, the killer tossing her corpse into the path of an oncoming truck for good measure. There's a creepy, extremely well done set piece featuring the killer hiding out in the back of a man's car. That's all great stuff. But the rest of the film is just meh.

That's perhaps the biggest disappointment of all as SCHIZO was directed by the great Pete Walker, the British enfant terrible behind films like FRIGHTMARE and HOUSE OF WHIPCORD. But unlike those films, all of Walker's subversive political and social commentary is missing. Walker was known for his subversion and willingness to push buttons, but here it just feels like he took the day off. SCHIZO is every inch your run of the mill giallo-inflected, psychological thriller-slasher with absolutely nothing special to make it stand out. It's perfectly serviceable, I suppose, if you're just wanting to watch something slightly sleazy, chock full of nudity and moderately gruesome. Just expect to hungry afterward. There really isn't much else to chew on here.