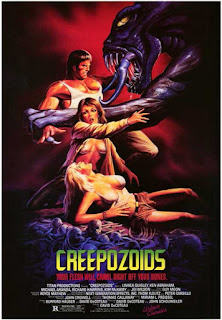 What better way to close out the week than with CREEPOZOIDS?

Full Moon Entertainment wasn't just a production house, they were also a distributor. This here film comes to us from Empire Pictures, a low budget production house specializing in genre film. That's right. A low budget genre house production distributed by another low budget genre house. Truth be told, many of the Full Moon “greats” were not in-house productions (note the quotation marks). CREEPOZOIDS is most definitely not one of those greats, but it is most certainly a fine example of what your average direct-to-video Full Moon release was back in the day.

CREEPOZOIDS is an ALIEN rip-off about five teenagers, all of whom are military deserters, spending the night in an abandoned (or is it?) research building. The world outside is consumed by World War III, the nuclear fallout turning the rain to acid. A quick look around the research facility reveals it to be the perfect place for our bunch of deserters to call home. There's food, working electronics and even a shower (because Linnea Quigley has to take her clothes off somewhere). Only problem, there's a big ass bug-thing running around and it doesn't take too kindly to visitors.

The nerdy Jesse is the first to go. He's attacked and manhandled, but found perfectly fine in bed the next morning. As the groups sits around eating their lunch, Jesse begins puking up black fluid, mutating horribly before dropping over dead. With this, the film is off and running. But it never really goes anywhere. That's the biggest problem with this film. Stuff happens but it isn't meaningful stuff. With such a small cast, the film can't just wipe out characters at a speedy clip. Instead, it just has people getting kidnapped by the monster, conveniently found unharmed a few scenes later, so there's more people to scream and yell the next time the monster shows up.

The giant rats sometimes show up for no other reason than to have a giant rat attack scene in the movie. The writers throw a whole lot of science shit around. The tragic circumstances of the lab are given to us via audio logs, kinda like in System Shock. But nothing ever really gels or comes to the forefront of the narrative. We get a lot of information, sure, but the film forgets to explain why any of it is important or, and this is the real kicker, why any of this is happening in the first place.

We're told that the lab was experimenting with artificially created amino acids, basically trying to create a way for people to no longer need food or energy. Well, that's really neat, but is that the cause of the monster? Someone mentions mutants, but we never see them. Is the monster a mutant? When the movie opens, we see a single scientist in the lab. Later, Jesse finds a different scientist dead. What happened here? The audio logs hint at something, but no one seems to care enough to find out more about it. Why exactly does Jesse mutate, but no one else does? Why does the monster have a habit of simply knocking people out when it's more than capable of flat-out killing them? What does Jake inject into the monster at the end of the film, seemingly killing it? Why does the monster have a human-looking baby monster burst out of its chest? Was that only put in the film as a winking ironic reversal of the classic ALIEN chestburster scenario?

And I know, I know, it's just a stupid movie so why do I even care? Well, I care because, believe it or not, these are things any film like this should explain. Yes, even the cheap ones. There's a fountain of great material here. Nuclear war. A bunch of teenagers running from their certain deaths on the front line of combat. A military science installation inexplicably left deserted. Biological mutation leading to a killer humanoid bug thing. That's all great stuff to build a movie from, but CREEPOZOIDS just doesn't give a shit. And I wanted it to give a shit. That's a shit I would have welcomed. I wanted a shit so bad I could taste it.

Instead, I got a ridiculous monster, some Quigley nudity, a bunch of silly deaths, stuffed mutant rats, and more questions than the film had answers for. That's all I got. I will admit that I was caught off guard once during the running time and that was when the obvious Final Girl becomes bug monster food, leaving us with the bland male secondary lead for our only survivor. But that's it. That's quite literally the only time CREEPOZOIDS gave me something interesting to chew on. And if left a lot on the table. There's a great B movie buried somewhere in this film. I just wish I could have been watching that instead.
Posted by David Grant at 9:48:00 PM
Email ThisBlogThis!Share to TwitterShare to FacebookShare to Pinterest
Labels: 31 Days of Horror, Creepozoids, Full Moon Entertainment