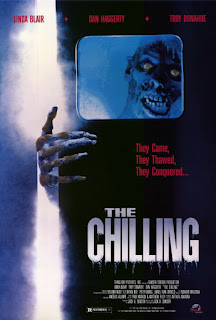 I'm not afraid of death. It's like being afraid of Tuesday afternoon. No matter how terrified of it you are, you can't stop the orbital rotation of the Earth. Death is like that, the inevitable end of existence. It's a strangely beautiful thing. It provides urgency, a reason to live every moment to its fullest. Life without death would be far less meaningful and important.

But one thing about death DOES terrify me. They say that right before you die, your life flashes before your eyes. The thought of that scares the hell out of me. Because the last thing I want to think about in my final moments is the fact that I once spent 90 minutes of my life watching THE CHILLING.

This movie stars Dan Haggerty and Linda Blair. That's really all you need to know. What's that? You want to know more? OK, then. You asked for it.

THE CHILLING begins with bad apple Joey boffing his girlfriend before slitting her ex-boyfriend's throat. He then picks up his gun and heads out with a few buddies to rob a bank. Things don't go so well for Joey. He and his friends are quickly slaughtered by a couple of cops. And that, Dear Reader, is the weirdest segue into a zombie movie ever captured on celluloid. Shortly after that, we're introduced to the staff of Universal Cryogenics, a state of the art

Sorry, I couldn't stop laughing for a moment. Ahem.

laboratory that is secretly a front for black market organ traffickers. On Halloween night, a massive thunderstorm breaks out (even though we never see it raining) and the lab loses power. The genius security guard Vince (played by Grizzly Adams) decides to move all the cryo-tubes (which are filled with the hollowed out and embalmed people Universal Cryogenics is supposedly keeping on ice until the time of their revival) outside to keep them cold. But for some unexplained reason, all the frozen bodies thaw out and come back to life as zombies. Zombies that are clearly just men in Halloween masks. Zombies that are wrapped in what looks like tin foil. Zombies that can use weapons, snap necks, leap from ledges and prefer to walk in single file lines everywhere they go.

And who is going to save the day? Linda Blair and some guy whose name I don't remember. Oh, and Grizzly Adams.

This movie is atrocious. It begins by telling us that “the facts (about cryonics) are true” only to turn around two seconds later and tell us that cryonics has been “successful in lower animals”. There's a lot of anti-cryonics talk in the film with multiple people shouting “it's against God!” or “it's against nature!” as the film goes along. Was cryonics ever really that big of the thing back in the 1980s that someone felt the need to make the world's worst anti-cryonics propaganda film? Hell, the only time the film lives up to its claim that “the facts are true” is when Linda Blair tries to use an electric door but can't get it to work. She screams “nothing works when the power is out!”.

And that's a true fact, people. Non-battery operated electronics will not work when the power is out. Let that sink into your thick fucking skulls, you goddamn idiots.

I like the fact that Joey and his friends don't wear masks to rob a bank in broad daylight. I like when our characters all pile in a car to get away from the zombies, only to drive two feet into a wall because no one noticed that they were in a one way alley. I like how Grizzly Adams dismisses his friend's claim to have seen something at the window by saying “nah, it was just a trick or treater” as if their town is full of kids who will go trick or treating in a massive thunderstorm, let alone expect candy from the local cryonics lab. I like how the zombies all retreat back into their cryo-tubes at the end of the film, magically fixing the metal doors they all wrenched free of their tubes when they busted out. I like the way this film made me want to punch myself in the eyes with a crusty dildo.

I'm lying, of course. I didn't like a single thing about this rancid turd of a film. It's so ineptly made that you can't even get a good smile out of it. I tried. I sat forward, trying to force the corners of my mouth to rise into a grin, every muscle in my face burning from exertion, but all I could manage was an inhuman grunt of displeasure and 10 minutes of painful face spasms. I couldn't even pretend to find this all amusing. I just wanted it over. I just wanted it to stop.

And then it did. So it's all good. How's your night going? You look cute as hell. My face hurts, how 'bout yours?
Posted by David Grant at 11:00:00 PM
Email ThisBlogThis!Share to TwitterShare to FacebookShare to Pinterest
Labels: 31 Days of Horror, Bag of Shit, The Chilling, Zombie movies