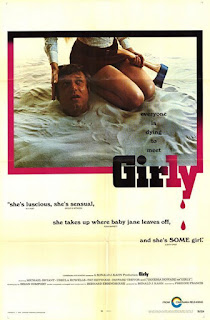 MUMSY, NANNY, SONNY & GIRLY is one of those overlooked gems of 1970s British horror that deserves rediscovery. In my oh-so-humble opinion, it's the single greatest film Freddie Francis ever made, a genuinely beguiling bit of work that is every bit as idiosyncratic as its title would suggest. It's weird, that much is for sure, and its stubborn refusal to ever come clean with the audience, suggesting more than it ever explicitly states, shapes the film into a wholly effective tale mad tale.

It's all about a family of four living in a secluded Victorian estate. There's Mumsy, the matriarch of the family, and Nanny, the keeper of the house. Neither character is ever named. They simply refer to each other by their titles, simple labels that describe their position of power within the home. Then there's Sonny, the rambunctious male child, and Girly, the coquettish female child. Only neither is actually a child. They're late teens at best, yet they spend their days playing children's games, singing nursery rhymes and getting into trouble. They sleep in beds made for children, are required by Mumsy to take their medicine before dinner and are doted on incessantly, provided they keep Mumsy's rules for how to behave in the house.

Sonny and Girly bring a drunk home with them one day. They name him New Friend. We learn that this man is but one in a long line of New Friends the “children” have brought home with them. When the new New Friend cannot seem to follow the rules, the family force him to play a game, one that just so happens to end with Girly bringing an ax down upon his tender neck.

A few days later, another New Friend is chosen. Like all the other characters in the film, he is never named, only referred to by his room number (“Friend in Two”). New Friend is a bit perplexed at first by the behavior of the family, but soon settles into the routine. What other choice does he have? New Friend thinks that he was the one who killed his lady friend the night they met the "children". But it was really Sonny that caused the unfortunate woman's death. Trapped in blackmail hell by the family, New Friend does his best to stay calm. He obeys the rules, only once trying to escape. Anymore than that and the family would most certainly send him “to meet the angels”.

But as the days go on, the man finds himself seduced by Mumsy, something that triggers the jealousy of both Girly, New Friend's object of lust, and Nanny, the most neglected member of the family. When Sonny catches wind of the quickly escalating sexual relationship between his sister and their captive, he sets upon Mumsy, trying to get her to see that Friend in Two needs to meet his maker. But New Friend has his own ideas and soon sets each member of the family against the other.

You would expect that a film primarily revolving around a sexual power struggle would be a) a bit sleazy or b) a bit heavy on the drama. MUMSY, NANNY, SONNY & GIRLY isn't either of those things. Sure, watching Girly, played by the stunning Vanessa Howard, flounce around the house in short skirts and frilly panties is delightfully sexy, but all the shock of her seduction by Friend in Two is gone once you remember that her character is probably nearing 20 years of age. The shift from “sex as pleasure” to “sex as a tool for manipulation” removes much of the eroticism from the film. Girly's deflowering isn't a deviant sexual act here nor is it especially fun to watch. For Friend in Two, it's a drawing of first blood, literally and figuratively, the first step towards the planned destruction of this so-called family.

So if the film isn't a sleaze fest or overly melodramatic, what does it have to offer? Well, it's utterly bat shit for starters. Between the “children” playfully placing the corpse of New Friend's lady friend in his bed to the family time spent watching Sonny's snuff movies, there's a definite air of the horrific here. There's also a slight whiff of sexism, as there is in many of these kinds of films. Without a father figure, this family has gone straight to hell. One has to wonder if Norman would have ever cracked if Mr. Bates had just hung around a bit longer. SPIDER BABY cast Lon Chaney Jr. in the role of surrogate father, doing his best to keep his mentally ill adopted family from killing half the populace. This underlying subtext doesn't loom over the film, but it's definitely there. There's also a flirtation or two with simplistic male wish fulfillment. Who wouldn't want to play favorite in a household consisting of a gorgeous young woman in a school girl's outfit, a domineering Mrs. Robinson type and a housekeeper dying for male attention? But this wish fulfillment goes right out the window at about the halfway point of the film. By then, the film has turned male endowment from a blessing into a kind of curse.

What I'm trying to get at (and failing miserably) is that MUMSY, NANNY, SONNY & GIRLY isn't a simplistic film. There's many layers to it and the ever shifting tone of the film gives it a schizophrenic atmosphere. The finale hints at the madness of the household finally infecting our hero with the promise of more violence to come. It isn't as effective a bit of Twisted Family horror as say THE TEXAS CHAINSAW MASSACRE or FRIGHTMARE, but as a subtly comedic bit of British nastiness, it works wonderfully. In all honesty, trying to write a review just after watching the film is a struggle. Right now, my thought are as scattershot as this film. It's almost as if it's driven me a bit mad too.
Posted by David Grant at 10:16:00 PM
Email ThisBlogThis!Share to TwitterShare to FacebookShare to Pinterest
Labels: 31 Days of Horror, Mumsy Nanny Sonny & Girly