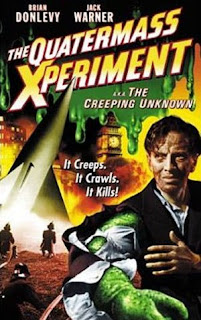 A rocket crashes back to earth, landing in a field in the British countryside. It was the first of many planned manned expeditions to space, the brainchild of one Professor Bernard Quatermass. When the Professor and his team arrive on the scene, they're relieved to find one of the crew members, Victor Carroon, is still alive. Their relief is short-lived however when they discover that the other two crew members have seemingly disappeared. A shell shocked and ill Carroon is taken back to Quatermass' research lab. They discover that Carroon is undergoing strange changes. His metabolism has slowed to a crawl, well beneath normal human levels. His skin is thinning, ice cold to the touch, and his facial features are shifting.

A Scotland Yard inspector, Lomax, is trying to investigate the disappearances of the other two crew members, but is largely stonewalled every step of the way by Quatermass. To the Professor, this is a scientific investigation, not a criminal investigation. But Lomax still suspects foul play, ordering his men to fingerprint the near catatonic Carroon. Even more questions surface when it's discovered that the fingerprints of the returned Carroon no longer match the fingerprints taken before the man boarded the rocket. All questions of guilt are answered once the film contained within the rockets on-board surveillance camera is developed. As the men sit and watch, a strange, unseen force terrorizes the crew of the rocket, killing two, leaving only Carroon alive.

In a desperate attempt to get her husband proper medical treatment (and distance him from Quatermass), Carroon's wife hires a private investigator to break her husband out of the hospital. Turns out, that was a massive mistake. Because Carroon isn't really Carroon anymore. He's now part space creature and he is mutating rapidly.

Hammer Studios' rise to the top of the British genre hierarchy begins here. THE QUATERMASS XPERIMENT (the “E” was dropped to capitalize on the film receiving an “X” classification from the BBFC) is a watershed moment in the history of British horror cinema. A feature film adaptation of the successful Nigel Kneale BBC mini-series, THE QUATERMASS XPERIMENT would go on to make bank at the box office, spawning two sequels and cementing its namesake in the annals of niche sci-fi horror flicks. It's easy to see why. Despite being over 60 years old, the film still packs a wallop, easily one of the best pulpy sci-fi horror films of the 1950s. In fact, this film must be downright horrifying back in the day, with its numerous scenes of exsanguinated corpses, all husk-like in appearance, their eyes caved in, jaws open.

For fans of 1950s sci-fi horror films, THE QUATERMASS XPERIMENT will feel like a warm trip home. All the pieces are here, from the straight-talking coppers to the scientists more interested in the personal glory of scientific advancement than in anything resembling humanism (at one point, Quatermass screams into the face of Carroon's justifiably worried wife, “there's no room for personal feelings in science!”). It's the kind of film where seemingly well-educated men will say “it's beyond human understanding” right after issuing long explanations for things. At the end of the day, its up to the cops and lab rats to set up an elaborate trap for the monster which, as custom dictates, includes more than a few fireworks. It's classic stuff.

In fact, it's almost a perfect 50s sci-fi horror film. But one thing kinda ruins it for me and that's Brian Donlevy's performance as Quatermass. Brought in to provide some kind of appeal to American audiences, Donlevy feels remarkably out of place here. His brash American mannerisms clash strongly with his predominantly British co-stars, all of whom feel natural in their performances. Donlevy seems to be playing Quatermass as a military man, not a scientist. He enters every scene with a lead foot, stomping through the scenery, barking out orders like a pissed off district manager at a costume shop. He always feels like he's one sideways glance away from slamming his fist down on a table, angrily shouting “I'M IN CHARGE HERE, DAMMIT!”. I'm not sure if it was his well-documented alcoholism or just his complete misunderstanding of the material, but Donlevy's performance as Quatermass, who you would assume to be the hero of the piece given its title, makes the character almost completely unlikable.

So oddly enough, it isn't the actor playing the protagonist that ends up carrying the movie, but rather the man playing the antagonist of the piece. Richard Wordworth's portrayal of Carroon is simply brilliant, almost effortlessly creepy yet sympathetic. In reducing the story from a six part mini-series to an 80 minute feature film, some sacrifices needed to be made. As a result, Carroon isn't quite as fleshed out a character here, but Wordsworth's portrayal definitely succeeds in creating a character worthy of empathy. In Kneale's original work, Carroon, now a monstrosity, is able to take control of his mutating body, committing a kind of suicide to save the planet. That angle was written out of this film, replaced with a flashy, typical B-movie style ending. But there are moments here when Wordsworth legitimately pulls off a Karloff-worthy miracle, making the monster into something worth feeling sorry for. Watching him twitch and stumble down a street, running away as fast as his body will allow him, his face perpetually wrenched in agony… It's difficult not to feel something for him, even if that “him” is rapidly becoming more “something” than “someone”.
Posted by David Grant at 8:25:00 PM
Email ThisBlogThis!Share to TwitterShare to FacebookShare to Pinterest
Labels: 31 Days of Horror, Hammer Films, The Quatermass Xperiment