THE MAN WHO COULD CHEAT DEATH 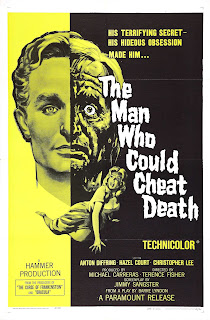 Meet Georges Bonner, surgeon, aspiring sculptor, discoverer of eternal life. He's 104 years old, though he barely looks 45. What's his secret? Well, science, of course. In particular, a special kind of surgery involving a gland replacement. And if you find yourself getting a little older a little quicker than normal, just drink some of his patented green elixir, the perfect impediment to slowly rotting to death as your body's cells play catch up with your actual age.

Georges' next gland transplant is quickly coming due and to conduct the surgery, he calls upon his old friend and colleague in dastardly science, Dr. Ludwig Weiss. Unfortunately, Ludwig has recently suffered a stroke, crippling his right hand, and worse, the back-up glands Georges had in storage have gone off. So what is Georges to do? Not having the transplant means that his body will age rapidly, turning to dust in a matter of minutes. There's only one thing he can do.

Georges has a complicated romantic history with a pretty socialite named Janine. The two have recently started seeing one another again, a development which annoys Pierre Gerrard, a French surgeon (this film takes place in Paris in the year 1890, by the way). After speaking with Ludwig, Pierre agrees to do the procedure, thinking that it is a routine medical operation needed to save Georges' life. However, once he learns the truth of Georges' condition, he quickly changes his mind. So Georges has little recourse. If moral persuasion isn't enough, maybe a little blackmail will do the trick. But first, he has to obtain a shiny new gland…

How cool does that sound?

Trust me, on paper THE MAN WHO COULD CHEAT DEATH sounds pretty great, but on film, it's one long bore. A remake of Ralph Murphy's much better thriller THE MAN IN HALF MOON STREET, Terence Fisher's film is a lethargic melodrama for most of its running time, only picking up steam at around the 40 minute mark. That's around the time Ludwig and Georges begin to butt heads. Georges is willing to kill to get a new gland for his operation, but Ludwig refuses to play any part in it. For a good ten minutes (and I mean good), the film becomes an interesting treatise on mortality, the ethics of life extension and the morality of selfishness. All of the films underlying philosophical concerns are laid bare in these scenes, with great dialogue and a passion in the performances that is not found anywhere else during the films 83 minute running time.

But then the film quickly descends back down into routine melodrama for another long half hour stretch of lifeless performances, stiff dialogue and languid pacing. The film ends with a kind of fevered ferocity so out of place with the rest of the film that it almost feels like someone swapped out the final reel of this film with the final reel from a typical Italian Gothic horror film. This has one of those “shrieking women in a burning building” endings that generally gets my pulse pumping, but by the time sparks started to fly, all of my patience had run out. I just sat there, waiting for it all to end, feeling like I too had aged 100 years over the course of those 83 minutes.
Posted by David Grant at 8:32:00 PM
Email ThisBlogThis!Share to TwitterShare to FacebookShare to Pinterest
Labels: 31 Days of Horror, Hammer Films, The Man Who Could Cheat Death