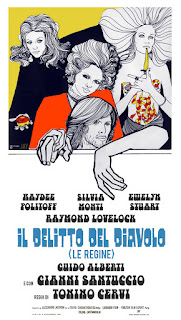 The Establishment is the Devil, man.

No shit, in QUEENS OF EVIL, the Establishment is literally the Devil. That is what this film is, an anti-establishment, pro-free love allegory dressed up as a Jean Rollin film. It's all about David, a good looking. motorcycling hippie (so of course he's played by Ray Lovelock) who happens upon a broken down, luxury car on the road one night. He stops to help the driver change his tire. The driver, who is never named, casually berates David about his lifestyle, pointing out the foolishness of his personal beliefs. And though he thanks David profusely for his help, the driver still sticks a nail in the front tire of David's motorcycle. Bummer.

David tries to catch up with the car, but the driver loses control, plowing into a ditch. David stops to check on him, only to find him dead. Seemingly not bothered at all, David then stops at a lovely cottage in the woods and sets up a sleeping bag in a shed out back. In the morning, he wakes to discover three sisters, Liv, Bibiana and Samantha, eyeballing him. As these sisters are played by Ida Galli, Silvia Monti and Haydee Politoff, David decides to hang around for a bit. They feed him cake for breakfast, flirt with him and generally treat him like he's the only man for miles. Though the outside of the house looks quaint, the inside looks like a haute couture nightmare, with a picture of each sister, blown up to gigantic proportions, hanging on the wall, gaudy bric-a-brac everywhere and lighting clearly designed for fashion rather than visibility.

Over the next few days, the sisters take turns seducing David, forcing food upon him and generally acting a bit strange. David begins cracking a bit. At one point, he leaves the house but quickly returns, only to find the kitchen barren (though it was stocked with food a minute ago) and all the sisters missing. He finds them in the woods, conducting some kind of ritual at a bonfire. He thinks it's all in his head. Just some freak twist of his own imagination. Or is there something more going on here? He is invited to a party at the spooky castle behind the cottage by the sisters. Inside, he meets a priest and some socialites. A little while later, he meets his fate.

Now this is why I have that spoiler warning above, because this is a movie whose power was clearly intended to be derived from its ending. Long story short, David decides that he wants to stay with the sisters. They ask him if he will give up his ideals for them, his freedom even. He replies “yes” so they messily slaughter him. In the morning, they bury him outside of the castle with all of the socialites in attendance. And that's when HE arrives, the Devil himself. Surprise, surprise, the Devil is indeed the man David thought to be dead in that ditch at the beginning of the film. The Devil berates the attendants, all figures of the Establishment, telling them that he's losing power over the people, all because of folks like David spreading too much damn free love, fight the power sentiment around the world. “They don't even think sex is a sin anymore”, one of the attendants remarks. The Devil angrily sends them off to win more people to the Dark Side. In the final shot, pretty flowers begin popping up all over David's grave.

I'm all for a good allegory, but there's a lot that doesn't make sense here. If David is the poster child for the anti-establishment, free love hippie, then wouldn't David throwing out his principles be a victory for the Devil? If so, why exactly was David killed? Wouldn't the allegory of the film be better served if David was like “gee whiz, I'd love to stay here with you three exotic beauties, but I'll never stop fighting the man, man”? If that happened, David's death would have felt like it actually meant something. The allegory would have had some kind of power to it. But as it stands, it just falls flat because it's ill defined and muddled by the desire to simply cap it all off with a shocking death scene. It's like fumbling the ball at the half yard line.

And why exactly is the rest of the film so heavily laden with obvious fairy tale references? From one of the sisters giving David an apple from the only apple tree around, to David's remarks that the sister's home looks like something out of Snow White, to the sisters feeding David gluttonous amounts of food, to the spooky castle… That all feels strangely out of place here, like the film was originally going to be a play on folk tales, but was then shifted into some strange theological-political allegory. Whenever the film isn't winking at us with allusions to fairy tales or common horror tropes, it's stuck in a kind of oddly subdued erotic mindset.

The sisters are all beautiful and, in typical Italian genre fashion, are often seen in barely there negligees or skin tight clothing. We get one sex scene per sister and director Tonino Cervi spends ample time on shots of moist lips, smoky eyes and smooth curves. All great to gander at, mind you, but I shouldn't be asking myself what genre of film I'm watching every twenty minutes. Is this a drama? A horror movie? A piece of softcore erotica? It's all and none at the same time.

When you add a schizophrenic soundtrack (which bounces from lounge to child's melody to jazz to chamber music) to the schizophrenic tone of the film, you end up with something completely off-putting yet strangely beguiling. I don't dislike this film (even though I find the underlying allegory to be weak and largely ineffective), yet I don't particularly care for it either. It's a strange one, more of a collection of moments than a cohesive whole. For good chunks of time, I was wholly under its spell. But when the film wasn't working or was too busy dragging its feet over the same metaphors to make any progress, it was like pulling teeth.
Posted by David Grant at 9:52:00 PM
Email ThisBlogThis!Share to TwitterShare to FacebookShare to Pinterest
Labels: 31 Days of Horror, Queens of Evil