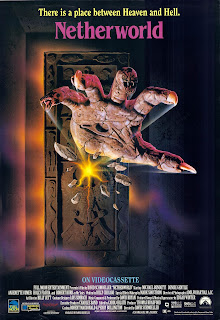 Look, it isn't my fault. I'm not deliberately trying to drown you in snarky reviews of bad movies. I chose movies that I had not seen in ages so I could get a nice refresher on the less well-known films of the Full Moon Entertainment library. I didn't expect so many of them to be this bad. And NETHERWORLD is bad. Worse, it's boring. Horribly boring. That sucks for both of us, because I have to try to come up with at least four paragraphs worth of stuff to say about it and you have to read it.

This isn't easy, by the way. What is there to even say about NETHERWORLD? Nothing of consequence happens during the entire movie. Do I describe just how little happens or do I embellish the little that does happen in an attempt to make it all sound interesting? The first five or so minutes definitely makes it seem like this will be a corny but entertaining ride. We have a young virgin visiting a brothel in Louisiana. He gets a room with a Marilyn Monroe impersonator and then…. Nothing. We cut instead to some random dude who wanders down a corridor he's explicitly told not to wander down. He runs into a woman named Delores, a gorgeous sex worker, who briefly flirts with the man before he's overcome by his rapey, hormonal urges. He attempts to force himself on Delores, but is stopped by a flying, disembodied hand (kinda like the orbs from PHANTASM). It crushes his head and there you go. There's your set-up. Sounds nifty, right?

But then we meet Corey, a boring pretty boy with daddy issues, who has moved into the family estate. Dad's dead, everyone treats him with equal parts suspicion and reverence, and the local jailbait Southern belle takes a liking to him. Corey discovers his father's journal (and yes, the most interesting bits of the film comes from Corey just reading) and learns that he can bring his father back to life using Delores' magic (she's a witch or something). For the next 40 or so minutes, the only plot we get is that Corey flirts with the underage sex bomb, then falls for Delores, Delores uses magic to blind sex bomb's mother, Corey is threatened by some slob named Bijou, Corey has a few brief hallucinations, birds act as soul vessels for dead people, and the prostitutes at the brothel might actually be dead historical figures brought back to life. In any ordinary film, that might be enough, but in this film, these plot elements are just kinda there. Nothing is woven into an actual narrative. Hell, we don't even get a bad guy in the film. There's no real villain.

Well, there is, but the villain is only introduced during the final 15 minutes. I suppose this sudden reversal was meant to have a THE WICKER MAN kind of effect, but it simply doesn't work. Dad shows up in the spirit world, his face caked in blue zombie make-up, and just basically proclaims “ha! Gotcha! I'm the bad guy!” It isn't a twist ending, because that would require the film to have been building towards a likely outcome, and it isn't a surprise. It's just another half-thought out plot development there to add to the inanity of the whole thing.

You would expect more from a film steeped in voodoo and shot on location in Louisiana. Unfortunately, both the voodoo lore and the location filming are wasted. You'd get a more authentic and engaging experience just by eating a box of Zatarain's while listening to any Louis Prima album. Or you could just watch ANGEL HEART or read All Heads Turn When the Hunt Goes By. Either would scratch that voodoo itch better than NETHERWORLD. I honestly have no freaking clue what David Schmoeller, the man responsible for PUPPET MASTER, CRAWLSPACE and TOURIST TRAP, was even trying to accomplish with this film. I suppose he was trying for something abstract and artsy, like a Lynch film, but all he ended up creating is a total bore, a complete cinematic void that starts slowly, proceeds glacially and ends like a great big fart in the wind.