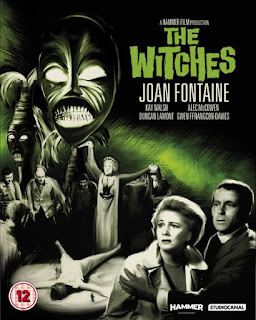 A woman moves to a small, quaint town only to find out that it is home to a coven of witches.

Look, I know formulaic is often used as a pejorative (even I use it that way from time to time), but there really isn't anything wrong with watching and enjoying movies that adhere to a very specific narrative formula. Sub genres are popular for that very reason. Hell, people love to bitch and moan about the lack of originality in movies these days, but when January 1st comes 'round and we sit and look at the previous years box office results, a clear trend towards the comfortable becomes clear. People clamor for sequels to films they love, new entries in franchises they love, etc. Originality isn't well received. If it were, movie theaters would be packed full of art house films during the summer. People like what they like and want more of what they like.

So don't get me wrong. Taken on its own, THE WITCHES is a perfectly decent film. But watching it in 2016, a full 50 years after its premiere in 1966, is difficult to do. If we were in a classroom all taking a course called “Outsider Discovers the Town is Full of Occult Types 101”, THE WITCHES would be the introductory film we would watch. This kind of narrative had already been around for awhile, but THE WITCHES is perhaps the single best example of it at its most pure and basic. The films that came after it all provided the variations and deviations that kept the narrative formula feeling fresh. Remember the ending of THE WICKER MAN? Or how ROSEMARY'S BABY brought this kind of pastoral cult terror into the modern world of New York City? Those were deviations. There is no grand deviation from the norm in THE WITCHES, but that's largely because this kind of film had not yet become routine enough to need deviation.

Beginning its life as a novel called The Devil's Own, written by a female author known for her historical romance novels, THE WITCHES was adapted as a black comedy by Nigel Kneale, the great British science fiction and horror writer. Unfortunately, whatever overt humor there was in Kneale's screenplay was removed, leaving behind only the unintentional kind. This is the type of film wherein a handful of over-middle aged men and women conduct an orgy fully clothed before engaging in ritualistic “dancing”, essentially just running in place while flailing their arms about, all  while someone's granny spouts gibberish in the background. It's meant to be threatening and spooky, and the gibberish is supposed to sound menacing. But it actually just looks like a bunch of people doing geriatric jazzercise while someone tries to recite the lord's prayer through a mouthful of marbles.

And stuck in the middle of all of this is Joan Fontaine, acting her heart out. Perhaps the single best thing about the film, Fontaine's performance manages to somehow hit all the right notes, even as the film descends into ridiculousness. Another interesting thing about the film is how it seems to be written from a singularly female point of view. It's a story that includes among its talking points the puritan obsession with virginity and the societal obsession with feminine youthfulness, especially the fear of aging into obsolescence. There isn't much to chew on in THE WITCHES, but there are scraps of life here and there. But mostly, it's just a lot of the same old thing.

But maybe that “same old thing” is “your old thing”, hmm? If so, THE WITCHES might be just what you're looking for. Personally, I just couldn't get into it. Maybe the problem is with me and not the film? That's a definite possibility. For right now though, I'm comfortable with saying that THE WITCHES is a decent film and a decent bit of history, but that's all it is.
Posted by David Grant at 10:47:00 PM
Email ThisBlogThis!Share to TwitterShare to FacebookShare to Pinterest
Labels: 1966, 31 Days of Horror, Hammer Films, The Witches