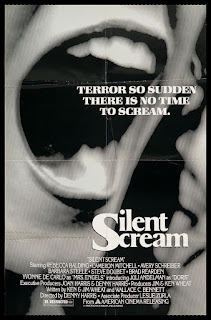 Not be confused with the anti-abortion propaganda film, Denny Harris' THE SILENT SCREAM is a 1979 slasher film all about a college student desperate to find a place to stay because she couldn't manage to get her housing application in on time. For shame. The student, Scotty, finds a room at a secluded estate house owned by Mrs. Engels, a distant older woman who spends most of her time locked in her bedroom. Her son, Mason, is a bit of a weirdo, but he also keeps the boarding house up and running with little troubles. Along for the ride are Peter, a preppy douche with a wealthy dad, Doris, the sassy female friend, and Jack, the dreamboat love interest.

Oh and there's someone else at the house, someone we spot digging around in the walls. Someone with a hard-on for large kitchen knives.

THE SILENT SCREAM doesn't do much different from other slasher films of the time. We have a large, spooky house, a few exposed nipples and more than a few stabbings, all accompanied by shrieking violins, a la PSYCHO. As the film goes on, we begin to realize that all is not well with the Engels family. There's some hushed talk of a sister named Victoria that supposedly lives somewhere on the east coast and that the patriarch of the family died a long time ago, two things that should raise suspicion levels for fans of the sub genre. When Peter ends up stabbed to death at the beach, two cops (who might as well be named Captain Exposition and Detective Padding) start an investigation with all signs pointing to someone in the Engels family being the murderer. The final solution to the mystery of who is slicing and dicing our surprisingly likeable cast involves implied incest, lobotomy, spilled blood and a loaded gun. Does that sound like fun?

Well, it is. THE SILENT SCREAM certainly isn't the most hyperbolic or hyper violent slasher movie around, but it's very well crafted and executed. My only real complaint is that the cop angle is only there for exposition. Our leads are not actively engaged in finding Peter's killer, nor are they even aware that a killer is in their midst. So from time to time, we have to have chunks of exposition delivered to us by Cameron Mitchell. It's not ideal. I would have preferred more active characters than those on display here, but everyone is likeable enough that I didn't mind just hanging around these clueless dipshits as they're bumped off one by one.

And not only does Cameron Mitchell make an appearance, but the film gives us both Yvonne De Carlo and Barbara Steele in supporting roles. In fact, the whole damn movie is stolen by Steele, despite her character never uttering a word. She's all eyes in this one, just penetrating glares and stares. Steele has always been a mesmerizing, almost hypnotic screen presence and the film is much better with her than it would have ever been without her.

Because, and let's be honest here, there isn't much in the way of scares in this film. The violence on display wouldn't raise 1/8th of an eyebrow in 1980, let alone 2016. But THE SILENT SCREAM trades the more explicit sex and violence of your routine slasher film for three things that work very well in its favor. One, competency. This is a very well put together film, unlike a lot of cheapo slashers that are loaded with suspension of disbelief shattering fuck ups. The second, the characters are likeable enough to invoke sympathy. I genuinely liked Scotty and Jack as a couple. Their relationship wasn't used a quick gimmick to show some bare breasts on screen. And the third, intrigue. While the finale is awash in tenuous movie psychology, the underlying mystery and suspense aspects of the film kept me invested. THE SILENT SCREAM might not have the most compelling story, but at least it has one, more than can be said for most slasher movies.

So if you're looking for sex and violence, go watch literally any other slasher movie. But if you want a decent tale to go with your breasts and brain matter, you could do a hell of a lot worse than THE SILENT SCREAM. Because it's actually good. I'm as shocked as you are.
Posted by David Grant at 9:41:00 PM
Email ThisBlogThis!Share to TwitterShare to FacebookShare to Pinterest
Labels: 31 Days of Horror, Slasher film, The Silent Scream