TERROR OF THE TONGS 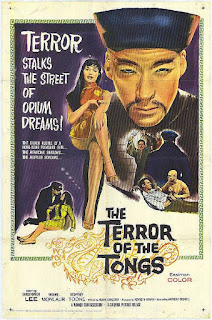 The year is 1910. A Chinese scholar has arrived in Hong Kong aboard a ship captained by Jackson Sale. As a thank you to the captain, the scholar gives him an ornate book. Just after leaving the ship, the scholar is killed by a hatchet wielding assassin. The reason for the murder is simple. The scholar is in possession of a sheet of paper containing incriminating evidence against the Red Dragon Tong, an underground criminal network that has much of Hong Kong under its thumb. Not knowing that the scholar stashed the paper inside the pages of the book, Sale gives the gift to his teenage daughter. The Tong, under the leadership of the shadowy Chung King, kills Sale's first mate and housekeeper while searching for the paper. Later that night, they also murder his young daughter.

Driven to find the men responsible, Sale begins exploring the underbelly of Hong Kong, prying information about the Tong from anyone he can, unaware that he is being manipulated all the while by rebellion forces eager to take their city back.

Not much of a horror film, I'll admit, but there is definitely a rougher side to this seemingly simple tale of a man seeking justice for his daughter's murder. TERROR OF THE TONGS is littered with scenes of fingers being chopped off, hatchets cleaving people's chests and shoulder blades, insinuations of sex trafficking and drug abuse, and even a scene of a man having his bones scraped with long, thick needles. It's rough stuff, for sure, but it clashes with the workaday, almost trite action side of the narrative. It's difficult to take the film seriously when grown men are literally slapping each other into submission one moment and stabbing people to death the next. There's a tonal disconnect going on here.

The film stars the late, great Christopher Lee as Chung King, the leader of the Tong (in what is basically a dry run for his later roles as the maniacal Fu Manchu) and that alone should tell you all you need to know about what kind of film TERROR OF THE TONGS is. Yes, this is a film where nearly every major Chinese speaking role is played by a British or Irish actor in yellow face paint and large, comical fake eyebrows. In terms of racial sensitivity, it's miles above Mickey Rooney's horribly racist performance in BREAKFAST AT TIFFANY'S, but it's undeniably problematic at times (Sale's deck hand is a young Chinese boy named Confucius, for Christ's sake). The portrayal of Sale's age inappropriate love interest, Lee, is perhaps the single worst offender in the film. Portrayed by a barely disguised white actress, Lee is submissive, her dialogue overly dramatic, her English stunted and her style of dress approaches fetish levels of cringe worthiness.

But the English-as-Chinese roles are not the real problem here. The biggest problem is that Captain Jackson Sale is an underwritten character portrayed by an underperforming actor. It might just be the fact that everyone else is acting so obviously odd that Geoffrey Toone's performance comes off as a bit flat, but it was undeniably underwhelming to watch a loving father barely react at all to the death of his daughter. For most of the film, Sale appears to be as emotionally invested in finding his daughter's killers as I am in grocery shopping every Sunday evening. The only time Toone really lets loose, really displaying any anger, is when he finally comes face to face with Chung King. In that scene, Toone is fully convincing as a man whose daughter was brutally murdered. But the rest of the time, he is so flat and collected that Chung King might as well have just spilled coffee on Sale's new rug instead of killing his kid.

Thankfully, the movie has a way of making up for these shortcomings. Simply put, the damn thing is glorious to watch. The period setting is wonderful, the sets are ornate and visually inspired, and the whole thing shines thanks to the glorious color photography of Arthur Grant. Despite tonal inconsistencies, the film breezes through its relatively short running time, stopping only for moments of necessary exposition (all the better too, as we can stop and stare at the scenery). The score is great, the direction is solid and the performances that work (especially Lee and Marie Burke) more than make up for the performances that fall flat. So if you're willing to overlook some obvious surface issues and more than a few instances of really lamentable racial stereotyping, TERROR OF THE TONGS might just make for a decent Saturday afternoon flick. There's little reason to recommend it over several of the other action thrillers Hammer put out during the time, like THE STRANGLERS OF BOMBAY or THE PIRATES OF BLOOD RIVER, but it's a good enough film to recommend, even with a few justifiable reservations.
Posted by David Grant at 9:29:00 PM
Email ThisBlogThis!Share to TwitterShare to FacebookShare to Pinterest
Labels: 31 Days of Horror, Hammer Films, Terror of the Tongs