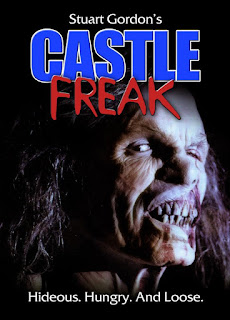 CASTLE FREAK has as much to do with H.P. Lovecraft as H.R. Pufnstuf had to do with molecular biology. I mean, I understand why this was billed as a Lovecraft adaptation. In 1995, tying the names Stuart Gordon and Lovecraft together meant instant cult attraction, but it becomes obvious half way through CASTLE FREAK that Gordon really only chose The Outsider, Lovecraft's most blatant Poe styled short story, because it provided a backdrop for a completely different experience. Lovecraft's tale, a first person narrated existential treatise on loneliness and isolation, features a man living alone in a castle. He wants human contact, to experience the outside world, but his attempt at attaining his desires only leads to more misery.

In the closing moments, he sees himself for the first time in a mirror and suddenly understands why people run from him. He's a deformed ghoul. CASTLE FREAK also features a deformed man living within the bowels of a castle, but the circumstances are markedly different. It is, for most of its running time, much more interested in tragedy and drama than full-throated horror or existential angst. And that really makes CASTLE FREAK one of the more interesting films in the Full Moon Entertainment library. It isn't cheap ass exploitation (well, not entirely) or goofy pop sci-fi. It's a genuine drama wrapped up in a genuine horror film with nary a sight gag or cheap laugh during its entire running time. It feels almost classy in comparison.

We begin with an elderly woman carrying a plate of food into the basement of an old castle estate located somewhere in Italy. Opening a locked door, we see a man, covered in scars, his wrist locked tight in a shackle. The old woman whips the poor guy a bunch of times before tossing him his food. Returning to her bedroom, the woman drops over dead. An unspecified amount of time later, her only surviving relative, a recovering alcoholic named John, arrives to live in the castle with his wife Susan and blind daughter Rebecca. John plans on staying only as long as it takes to liquidate and sell off the property.

As the days go on, we learn more about our family. Susan and John are distanced, the result of a fatal car accident that took the life of their young son and blinded their daughter. Though John has been sober ever since the accident, Susan can't bring herself to forgive him. Late at night, John hears what sounds like crying coming from somewhere in the castle. The caretaker, Agnese, tells John of the old legend, that people in the town claim to hear the wailing of Giorgio, the child of John's late relative, late at night. Giorgio was said to have died when he was just five years old and that his mother, overcome with grief, became a recluse shortly after, never leaving the house for close to 40 years.

If you haven't figured it out yet, the man in the basement is none other than Giorgio. We learn that his mother faked the child's death, imprisoning him in the basement, torturing him as revenge for her abandonment by the boy's father. Giorgio, as you might expect, is a mess, his face mutilated from years and years of abuse. He's a gibbering thing, riddled with scars, his penis severed (presumably by his mother). After catching wind that someone new is inside the property, Giorgio bites off his thumb so he can squeeze out of his shackle. At night, he wanders the property, eventually taking a liking to the blind Rebecca, watching her as she sleeps.

Before long, Rebecca begins to think they are not alone in the castle. John starts to have his doubts too, but his fights with Susan take too much of a toll on him. He hits the local bar, drinking his fill and then some. He meets a local prostitute, taking her back to the castle. And that is where I will stop. You really should experience the rest for yourself.

CASTLE FREAK is a sucker punch of a film. It's one of those movies that escalates well, really sneaking up on you from time to time. This isn't cheap exploitation. The scares and outrages on display here are earned, its violence is shattering rather than entertaining (one murder in particular actually left me quite shocked by its brutality, something which rarely happens), and the material is treated straight and with conviction. There's actual acting from actual actors here. The film is crafted with deliberate care. There is a serious movie buried beneath its attention seeking title and some serious depth beneath its low budget exterior.

It's been well over a decade since I last saw the film. I remember absolutely hating it. I found it too boring, too stoic at times. I was very, very wrong. Because while this film is certainly leisurely in setting up all the pieces, when the film finally gets going, it moves along at a very brisk pace (almost too brisk as several major plot developments seem to just come out of the blue). The things that once annoyed me, like the attention spent on the family dynamics, are the things I genuinely appreciated this time around. I especially liked the ambiguity of the whole thing. Giorgio in particular is a fascinating character, not a Lovecraftian beastie, evil by nature, but just a horribly broken human being. The subtextual connection between John and his dead relative, and between Giorgio and Rebecca… it all adds to the tragedy of the whole film. And make no mistake, for all its scares and gory deaths, this film is far more a tragedy than a simple horror film.

There is something strangely heartbreaking about the way Giorgio reacts when he finally realizes that Rebecca is blind. They're two broken children from two broken families. There's a great sense of poetic finality to the climatic scene of the film, two “bad” sons fighting over a family they both want but neither can have. Mirrors, mirrors, everywhere, literally and figuratively. But if you're not in the mood for subtext or lightly Freudian overtones, the surface level of the film is pretty great too. It's cheaply produced and sometimes a bit too heavy on the shadows, but it's a good looking, very well acted film. You might be disappointed by the lack of chills leading up to the 45 minute mark, but when it finally does jump headlong into horror, you'll have a hell of a time.
Posted by David Grant at 10:06:00 PM
Email ThisBlogThis!Share to TwitterShare to FacebookShare to Pinterest
Labels: 31 Days of Horror, Castle Freak, Full Moon Entertainment, Lovecraft