SOME BRIEF THOUGHTS ON SHIN GODZILLA 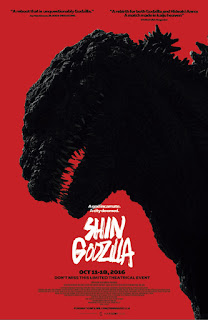 I know next to nothing about the current state of affairs in Japan, either socially or militarily. I know a bit about the events of the 1940s and 1950s, particularly the disarmament of Japan, and the resulting treaties and strictures put on the country following WWII, but anything current? I have no idea. I learned what I needed to learn about Japan so that I could fully understand the cultural environment that gave birth to GOJIRA in 1954. Because monster movies are serious business, ya know?

So I need to begin by pointing out that much of the social and political commentary going on in SHIN GODZILLA went sailing right over my head. I picked up on some of the satire and condemnation of the government over the handling of the Fukushima Daiichi disaster, mostly because I watched it actually unfold on the news and the web. But the rest was just a blur of words, many of which I had no choice but to say "yeah, OK" and then simply move on like I fully grasped what the hell the point of it all was.


Make no mistake, SHIN GODZILLA is a Japanese film made for Japanese audiences. The general feeling of nuclear anxiety that allowed the 1954 original to be appreciated across borders is gone. This is a response movie. What the film is responding to is not something easily grasped by non-citizens of Japan.

Thankfully though, the film is a goddamn great time and it moves so fast and so fluidly that any confusion is left in the dust mere moments after it forms. This isn't a monster bash. It's a disaster movie. Every bit of the dialogue is centered around that. Every action is centered around that. As such, you can find footing, even if the specifics don't add up to much for you.

Godzilla itself was a mixed bag and I mean that in a good way. As an evolving creature, it moved from an absurd and strangely adorable monstrosity wiggling through the streets of Tokyo to what can only be described as a nightmare. The final form of Godzilla is perhaps the most visually interesting and impressive representation of the King of the Monsters ever to grace the silver screen. The impressive arsenal of destructive capabilities made me giddy like a kid on Christmas, but the devastation it wrought upon virtually every place it stepped made me wince a bit. The presentation of the film, from the subtext to the visual representation of Godzilla itself, might have been a total 180 from the Gojira of Honda's 1954 film, but the spirit of SHIN GODZILLA is rooted strongly in the origins of the franchise.

This is an at-times thrilling and at-times positively chilling film, one that I need to watch a few more times to really "get". But for as lost as I was at times, I was reminded why Godzilla has become such a culturally significant icon, both in Japan and outside Japan. Because while we can all appreciate a bit of the funny stuff like Godzilla flying through the air or doing a victory dance, the character is rooted so deep in tragedy and fear that it can, and at times has in the past, really sneak up on you and throttle you into submission. It is a malleable franchise with a flexible lead, capable of being light-hearted fun or convincing horror. SHIN GODZILLA begins as a bit of the former, but once the monster bears its fangs, quickly becomes something much more akin to the latter.