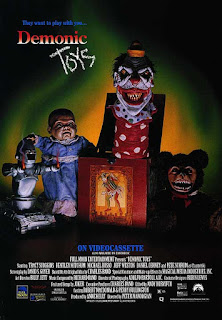 When I was a kid, dolls were my kryptonite. I'm not exactly sure why. Action figu-WAIT. Wait a minute. This all seems familiar.

Oh, it's because I'm watching my second Full Moon Entertainment killer doll film in three days. That's why. Only this ain't no PUPPET MASTER, that's for damn sure. No, what we have before us today, Dear Reader, is DEMONIC TOYS, Full Moon's blatant attempt at making their own CHILD'S PLAY. Both films start with a shoot-out, a criminal taking a round to the chest. He makes his way into a toy factory (instead of a toy store) and lies down, ready to bleed to death. That's more or less where the similarities end with the set-up, but there will more to come later.

Anyway, the bleeding crook's accomplice is being chased by Judith, our rough and tumble policewoman lead. She manages to subdue the bastard (who just moments before, shot her undercover cop boyfriend to death in the parking lot), but the two get locked in a room together. Meanwhile, the half dead asshole with the bullet in his belly meets his maker when a handful of dolls come to life and rip him to shreds. Turns out there's a demon roaming the storerooms and hallways of this here factory, a demon who just so happens to need a mortal body. Not just any mortal body, mind you, but an unborn baby body (say that five times fast). Well, whad'ya know? Judith just so happens to be about a month along in her pregnancy. It's like this was all preordained to happen! I mean, the only way this could be more preordained is if Judith were having nightmares about two boys, one of whom has demonic eyes, playing cards in her living room. Oh, that's actually happening?! What are the odds?!

Anywho, we meet Mark, a take-no-shit teenage fried chicken delivery boy, and his amazing chicken wagon. He brings food to Charnetski, the late-night security man at the toy factory. They soon discover Judith and the crook locked in the room. Judith asks Charnetski to go call the precinct while she keeps an eye on things. Poor Redshirt Security Man barely makes it halfway down the hall before he's attacked, chewed up and stabbed in the dick by the titular Demonic Toys. Now at this point, you would expect a lot of “what the fucks?!” to come pouring out of our character's mouths, but thankfully, the film has a built-in defense mechanism against exposition dumps. A runaway named Anne literally comes crawling out of the ventilation shaft, announces “the dolls are alive and there's a demon and some shit and we need to yadda yadda yadda” and the film just takes off running. Its the most absurd thing you'll see all year, but honestly, you could say that about pretty much everything in this film.

I don't do drugs, but DEMONIC TOYS definitely made me rethink that life choice. I imagine this film is a helluva lot more fun after you tear through 15 pounds of pot and a bucket of psilocybin mushrooms. But with regular old brain chemistry, getting through the film was a chore and a half. For starters, the killer dolls, the things we're supposed to be afraid of, are hand puppets. No shit, that's what they are. The star of the film is a demonic baby doll named Baby Oopsy-Daisy. She's the Chucky of the film, a foul-mouthed murderess who sarcastically teases and berates the cast every chance she gets. But it's a hand puppet and you can't be scared of a hand puppet. It's an impossibility. They might as well have just stuck an Andrew Dice Clay tape in the back of a Teddy Ruxpin doll and filmed that. The violence these hand puppets mete out is certainly juicy (faces are chewed up, a woman is stabbed repeatedly in the eye, a toy robot blasts bloody holes in torsos and legs), but am I supposed to be laughing, puking, gasping or wanting to beat myself in the face with a brick while watching this? Talk about a mixed message.

And if watching hand puppets molest bad actors wasn't weird enough for you, how about watching three little girls in gas masks riding their tricycles through a factory? Is that weird enough for you? We get a flashback to the 1920s where a couple of elderly Satanists are delivering a baby demon into the world. When it turns out that the poor little demon baby is stillborn, one of the Satanists wraps the dead little guy up in a blanket and gives it to some unsuspecting trick-or-treater. The film ends with a fight between two little kids. Characters unironically spout lines like “the world is a toilet and all the people in it are assholes”. It's just weird. The whole damn thing is weird.

And all that weirdness and unintentional comedy should have added up to make a fun experience. Unfortunately, it just isn't any fun at all. At less than 90 minutes, the film feels like it takes forever to get anywhere and the anywhere it's going is a place not worth visiting. The internal logic is all fucked because the film gives us a bad guy that can do anything at anytime to anyone. The killer dolls are kept off-screen for most of the film and the resolution is an attempt at an “aww shucks” kind of sweetness that feels out of place in a movie where a murderous baby doll screams “you're fucking up my make-up!” while being blasted in the face with a homemade flame thrower. For all the bizarre shit it contains, the film never goes full-on batshit insanity. For all the gruesomely gory deaths, the film never goes full-on horror. It just treads water for the majority of its running time, ultimately wasting whatever potential it might have had to be a great midnight movie.

If you would have told me that a movie featuring killer hand puppets, an exploding chicken wagon and Tracy Scoggins would have been this boring, I wouldn't have believed you. Yet here I am. Bored and craving fried chicken.
Posted by David Grant at 4:29:00 PM
Email ThisBlogThis!Share to TwitterShare to FacebookShare to Pinterest
Labels: 31 Days of Horror, Demonic Toys, Full Moon Entertainment