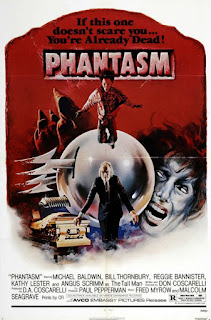 The PHANTASM franchise is the horror movie equivalent of Lost. What began as an engaging, mysterious puzzle box quickly tumbled down the rabbit hole of absurdity. The mysteries and riddles on offer were solved with even larger mysteries, all of which required increasingly ridiculous solutions. With each new go around, a little more luster was lost. After a handful of years, whatever it was that attracted us to the property was gone, replaced by time wasting, manipulative promises of more answers, more developments, more more more. Sure enough, the sneaking suspicion that no one really thought all of this out in advance began to set in. Not that it mattered though. We started the journey all those years ago. We kept going because of routine, because we hoped the promises would eventually be fulfilled.

Neither Lost or the PHANTASM franchise amounted to much in the end. PHANTASM: RAVAGER was the final breath of a franchise that had died creatively many years prior. It felt tired with itself, with its lore, with its audience. The only positive I can say about it was that it one upped PHANTASM IV: OBLIVION in sheer misery. Not much of an accomplishment, but hey, slim pickings. Watching the finale of the franchise (one can hope it is anyway), I was reminded why I have for years viewed the original PHANTASM in a vacuum, treating it as if it were the first and last of its kind.

PHANTASM, the horror feature debut of writer/director Don Coscarelli, is one of the best Nightmare Movies out there. It's a plastic reality thriller all about two brothers and the Tall Man, a fiendish ghoul in charge of the local mortuary. At the funeral of their brother (a brother whose death by multiple stab wounds was ruled a suicide for some reason), Mike, the younger brother, watches the Tall Man single-handedly lift the coffin into the back of his hearse, transporting the body back to the mortuary. For some unexplained reason, the mortuary houses an inter-dimensional portal that leads back to whatever fresh hell the Tall Man came from.

As he investigates further, Mike comes under attack from little people in robes, the result of the Tall Man distorting the bodies of the dead, and flying orbs capable of attaching to (and drilling through) the skulls of trespassers. After mutilating the Tall Man's hand, Mike shows Jody, his older brother, a still-twitching disembodied finger. That's enough to convince Jody that Mike's tall tales are a reality. Together with their friend, the local ice cream man Reggie, they confront the Tall Man.

Anyone who has seen PHANTASM would not be surprised to learn that Coscarelli and Co. filmed without a completed script. Many (if not most) of the scenes in the film are arranged almost haphazardly without any regard to formal structure or pacing. Twice Mike returns from a close encounter in the mortuary, twice he is then immediately left on his own, and twice does the Tall Man return to finish the job in the very next scene. All of this random (or I should say non-standard) pacing results in Nightmare Logic taking over.

By the time the film reaches its penultimate climax, the idea that Mike cannot simply escape from the Tall Man reaches absurd heights. Not only can Mike not outrun him, the Tall Man can appear in front of him in the guise of an attractive woman (a staple trick of the villain throughout the film, true, but how exactly is he both chasing Mike and standing in front of him?). The solid ground beneath Mike's feet turns to mud and hands come reaching out, grabbing at his ankles. The entire concept of a logic-based reality crumbles as the movie goes on. We're no longer watching two brothers deal with strange things. We're watching two brothers deal with surviving in a world that seems to be going mad.

The final solution to the puzzle of what is real and what is fantasy is completed ignored in the films final moments. We receive an answer, then a rebuttal to that answer. Like A NIGHTMARE ON ELM STREET, you could arrive at the conclusion that the entire film, from the first frame to the last, was just a dream. In the same way that Craven's film puts your nerves at rest by telling you “ah, see this is all just a metaphor for repression and the cathartic release that comes when facing your fears and troubles” only to then violently yank Ronee Blakley through a front door window, PHANTASM only provides a fleeting glimpse of closure. Yes, you could choose to ignore the final shot of the film and tell yourself that this is all a great big story about a child dealing with the death of a loved one, but that would require ignoring the lessons the film has been teaching you for the past 89 minutes.

Ever have that feeling when waking up from a nightmare, the doubt of whether or not its really over, if you're really awake or if you're only buying time, only momentarily safe from the shadowy beast that's been chasing you through your subconscious? That's PHANTASM in a nut shell. The later attempts to provide some kind of logical structure for all this nonsense to adhere to seems counter intuitive. Does it matter that we watch a man's entire blood supply get vomited out the back end of a death sphere yet don't see a drop of blood anywhere in the hallway after? Does it matter that characters seem to take preparations for oncoming attacks yet still end up in the most vulnerable situations? Do we need to know what exactly the Tall Man is or why his disembodied digits can turn into pissed off, giant flies? Do we really need explanation or concrete reasoning in a film that is, from start to finish, one long nightmare sequence? No, we don't. Because as a singular film, PHANTASM is beyond mere explanation. It's just a bad dream. Just a glorious, wonderful bad dream.
Posted by David Grant at 8:03:00 PM
Email ThisBlogThis!Share to TwitterShare to FacebookShare to Pinterest
Labels: 31 Days of Horror, Phantasm, Plastic reality