THIS NIGHT I'LL POSSESS YOUR CORPSE 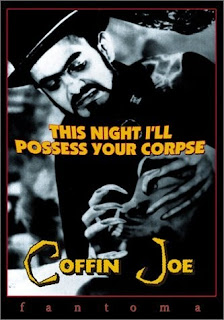 Who is Coffin Joe? Well, he's the antagonist / star / alter ego of Brazilian horror director Jose Mojica Marins. The character's real name is the-difficult-to-remember-how-to-spell Ze do Caixao, but I'll just call him Coffin Joe because this is my review dammit and I'll do as I please. The character's first appearance was in the delightfully titled AT MIDNIGHT I'LL TAKE YOUR SOUL, the first horror film to come out of Brazil. The character has since made appearances all over Brazilian genre media, including television. He's the Brazilian Freddy Kruger, I suppose.

But who really is Coffin Joe? Well, he's Friedrich Nietzsche reimagined as a Jess Franco villain. In the second of the Coffin Joe trilogy, THIS NIGHT I'LL POSSESS YOUR CORPSE, he's up to his old tricks. See, Joe thinks of himself as a superior man, the Ubermensch, if you will, and as such this superior man needs a superior woman to give birth to his superior son. So Joe kidnaps a bevy of barely clothed women and begins a series of tortures, aided by his hunchback lackey, Bruno. These tortures include forcing the women to watch one of their own have her face dissolved with acid and enduring a tarantula onslaught. Only one woman shows no fear, the sign of the what? The Uberfrau?

Unfortunately for Joe, the woman, Marcia, doesn't take too kindly to having to watch her friends being killed by poisonous snakes during sex so she calls the whole thing off. Later, Joe spots Laura, the attractive daughter of the take-no-shit Colonel. Once Joe manages to get his hands on her by killing her brother (and framing the Colonel's bodyguard for the murder), the two fall madly in love. Badda bing, badda bang, Laura's pregnant.

And they all live happily ever after. The end.

Not really but you kinda get the idea. THIS NIGHT I'LL POSSESS YOUR CORPSE is a bizarre, everything but the kitchen sink kind of film. It's like watching FRANKENSTEIN on expired LSD. Joe's abode looks like a repurposed 1950s mad scientist set. At one point, Joe crushes a man's head under an obvious fake rock. When he learns that one of the women he killed was pregnant, he has a dream of visiting hell. It's like a student film remake of JIGOKU, complete with a wall made of severed heads, legs and arms, all of which are flogged and then poked repeatedly with a cardboard trident. The entire production is a mix of carnival spook show and Grand Guignol nastiness, and as such, the tone is just all over the place. The head crushing scene, the one with the large, fake rock, is immediately followed by a close up shot of a woman's ass. There you go. That's this film in a nutshell.

But what a nutshell it is. There's some strangely artistic shit going on here, some of it bordering on experimental art house. Every single shot is loaded with artifice, just dry ice and bric-a-brac as far as the eye can see. The non-matching edits would stick out like a sore thumb in virtually any other film, but the strange continuity errors only add to the weirdness of it all. And weirdness is this films stock and trade. When Joe and Laura finally conceive, the soundtrack blares Handel's Hallelujah. About ten minutes later, Joe is smashing a hatchet into some guy's face then drowning three others. Ten minutes after that, we're watching a mob, all torches and pitchforks, chase Joe through town. It's weird weird weird weird weird weird weird stuff.

The only weak point of the film is Coffin Joe himself. I just cannot take him seriously. Decked out in a cheap-o Dracula costume, his nails extending about three inches from his fingertips and sporting one helluva unibrow, Joe doesn't inspire fear as much as he does bemusement. You're never once going to cower in fear at the sight of him and his cornball, pretentious dialogue sounds like it was ripped from some high school anarchist's manifesto. Joe doesn't believe in god, doesn't believe in laws, doesn't believe in good or evil, doesn't believe in the state. Yeah, I get it. You're too cool for school, dude. You read The Gay Science and now you got it all figured out. I mean, it's difficult to take a serial killing nut job seriously when he looks like a cross between a stage magician and Torgo from MANOS, THE HANDS OF FATE. It's even more difficult when Torgo is spouting anti-establishment lingo that sounds like it was ripped from any given /pol thread (minus the inevitable anti-Semitism, that is).

But you don't watch THIS NIGHT I'LL POSSESS YOUR CORPSE for the frights and the shivers. You watch it for the madness of it all. I can't say Marins succeeded in making a successful horror film, but I can say that he most definitely succeeded in making one damn fine bit of bizarro entertainment. I was never bored by it. I was often overwhelmed though. For a shining example of auteurist, low budget horror goodness, look no further that this here excursion into lunacy. You will not regret it one damn bit.

Posted by David Grant at 11:24:00 PM
Email ThisBlogThis!Share to TwitterShare to FacebookShare to Pinterest
Labels: 31 Days of Horror, Coffin Joe, This Night I'll Possess Your Corpse