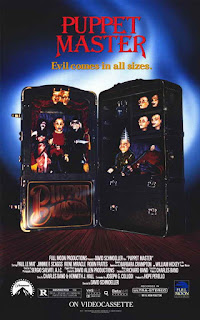 When I was a kid, dolls were my kryptonite. I'm not exactly sure why. Action figures were cool. The little fantasy maquettes my parents would sometimes buy me for Christmas didn't faze me. But dolls? Argh they just bothered me. There was something about this little humanoid thing sitting there, unblinking, smiling at me constantly, that really freaked me out. And mannequins? Fuck 'em to hell. They're horrible.

The late 90s saw a small but noticeable boom in killer doll movies. The one that springs to mind first is Stuart Gordon's DOLLS, a surprisingly sweet little movie from 1987 that had a few genuine chills, but was more or less a kind of wistful children's tale, albeit a moderately gruesome one at times. Then came the powerhouse, Tom Holland's CHILD'S PLAY in 1988. Chucky, perhaps more than any doll since Talky Tina, scared the absolute hell out of me back then. Because what was Chucky? He was a smiling, staring little bastard that would choke the fuck out of you when you were least expecting it. We had a little doll sitting on the back of the toilet when I was a kid. My mom put it there for (questionable) decorative purposes. After seeing CHILD'S PLAY, taking a shit was a terrifying experience.

But I liked being scared as a kid so when I saw PUPPET MASTER sitting on the shelves of my local rental store, I had to see it. Turns out, it wasn't even remotely frightening. I think that's when my fear of dolls went away and a new fascination began. After watching the film, I just really wanted my own army of walking dolls, each one purposefully created for a specific method of slaughter.

I was a strange kid.

Today was the first time in about ten years that I watched PUPPET MASTER. I barely remembered anything about the plot of the film, but I'll be damned if I didn't remember each one of the killer puppets. That's the thing about PUPPET MASTER. It didn't matter what the hell the film was about. One look at the box art and you were sold instantly, and while the film hasn't aged as gracefully as I hoped, the design of the puppets and the energy of the film still left me giddy.

The basic gist of the film is this: four friends, all of whom share a psychic connection, travel to the Bodega Bay Inn, located in sunny California, to visit a colleague. Upon arriving, the group (straight man Alex, the brash and cynical Dana, and the sexual empath couple, Frank and Carlissa) is shocked to discover that said colleague, Neil, committed suicide shortly before their arrival. They spend some of their time getting to know Neil's widow, Megan (the owner of the Inn ever since the death of her parents), but they mostly squabble, screw and antagonize each other. None of them really liked Neil and Neil didn't really like any of them. So what's going on here?

Well, the Inn just so happens to be the last known address of one Andre Toulon, referred to many times as “the puppet master”. Like Neil, Toulon also committed suicide, albeit for a better reason. It was either that or get hauled off by Nazis back in the late 30s. Turns out Toulon had gained the knowledge of eternal life, practicing this art on a handful of puppets he crafted in his spare time. Right before he shot himself, Toulon put his little friends into a chest, hiding them inside the walls of the Inn. Now they're out and before long, they're laying waste to the entire cast. And if that's not enough, Neil's body has a strange habit of turning up inside people's bedrooms. Is he really dead? Or did he discover Toulon's tricks?

Do you kids at home know?

So yeah, this is all predictable stuff. The most interesting elements of the plot are all lore based. We learn that the rites of eternal life are Egyptian in nature, but what exactly are they? Why do our characters share a psychic connection? How exactly does one shoot themselves in the head AND THEN bring themselves back to life? What was with the Nazis in the beginning of the film? These are all interesting questions, but unfortunately, none of them are answered. Well, some of them are, but not here. The film was successful enough to spawn about a billion sequels and a comic book so you can find those answers elsewhere but here? They're just dropped.

And that's one of the things that sucks about the film. It feels half thought out at times and outright ridiculous at others. During the 1939 flashback introduction, how does no one notice a two foot tall Nazi-looking puppet with a hook for a right hand running through the busy Inn? Was peripheral vision not invented yet? What was with the sudden reappearance of the dead housekeeper during the final ten minutes? She just shows up, blocks the exit so our heroes can't leave and is then never mentioned or shown again. And what exactly happens at the end of the film? After our big bad is mutilated by the puppets, Alex is shown leaving the next day while Megan just stays behind. Did they call the cops? Does Megan suddenly not mind sharing a house with a band of killer puppets? Moreover, are the puppets good guys or bad guys? They kill the majority of the cast, but act all shocked when Megan gets smacked around. After killing Neil (oh what? You can't spoil the obvious), they don't even bother finishing off the rest of the cast. Why? And if you're Andre Toulon, worried about the puppets falling into the hands of evil people, why make a puppet with goddamn working metal drill for a head? Isn't that just asking for trouble?

You'll be asking yourself that more than a few times as the film goes on. But really, who cares? PUPPET MASTER is a cheap, direct-to-video thriller that succeeds more than it fails. It's difficult to care about plot holes while you're watching a sexy little puppet nuzzle a naked man's nipple right before barfing up a leech on his dick. That scene encapsulates everything great about this film. It's slightly grotesque, blackly comedic, and made with a devil-may-care attitude. It is easy to see why the film was a success and why it became the most well known franchise Full Moon Entertainment ever released. It's whimsical but adults only. It's campy without being cringe worthy. It's cheap but laudable in its attempts to create something unique. It's brain candy. It's Saturday morning cartoons.

And it is remarkably fun to watch.
Posted by David Grant at 4:21:00 PM
Email ThisBlogThis!Share to TwitterShare to FacebookShare to Pinterest
Labels: 31 Days of Horror, Full Moon Entertainment, Puppet Master