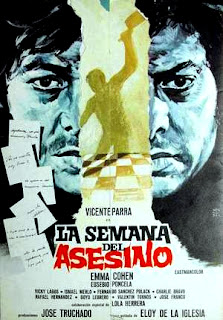 There's no cannibalism to be found in CANNIBAL MAN. There's also very little plot to be had during its 94 minute running time. Eloy de la Iglesia's 1972 Spanish psychological melodrama ended up on the DPP Video Nasty list, primarily because of its use of actual slaughterhouse footage, but it isn't what anyone would consider a gratuitous exploitation film. It certainly isn't a horror film. If anything, it's more of a tone poem, a lightly plotted character study of a man who accidentally kills a taxi driver, then purposefully kills his girlfriend when she threatens to go to the police. That murder leads to another murder then another murder, etc. The main thrust of the narrative is in watching the increasingly unstable Marcos try to pull himself out of the hole he keeps digging for himself. It's a Sisyphean task, to say the least, but here the rock rolling back down hill has been replaced with shattered skulls and slit throats.

This is going to be a short review, not because of laziness, but because there really isn't much to say about the film. It's definitely an acquired taste kind of thing, probably too slow for many. The film has numerous bits of nudity and gore (people die messily in this film) and those moments are all the more effective by being surrounded by an otherwise very low key melodrama. This is a tale of madness, mind you, but it isn't histrionic or hyperbolic. There are no hallucinations. Marcos doesn't hear voices or see his victims following him around. He is most certainly losing his mind, but not as the result of a disconnect from reality. It's guilt that tearing Marcos apart.

One thing that definitely separates CANNIBAL MAN from your usual bit of Spanish exploitation from the 1970s is the use of a homosexual character, both as an audience surrogate of sorts and as a pseudo-love interest. Marcos' neighbor, Nestor, is perhaps the character most sympathetic towards Marcos, the most caring, the most welcoming. The women in the film are by turn domineering, leering and nosy. The men, like Marcos' brother, are brutish and hyper-masculine. The budding friendship between Marcos and Nestor feels natural and the film strongly suggests as it goes on that Marcos is not only aware that Nestor has a romantic interest in him, but that Marcos might very well be coming around to the idea of engaging Nestor in that romance.

This side of the narrative is actually the most interesting thing about the film. Nestor is the only one spared the knife (or hammer or rock or bolt cutter) and it's his actions that lead Marcos to turn himself over to the police. You could in fact see the entire film as the story of a closeted male struggling to maintain his secret. Homosexual relationships were not largely legal in Spain until well after the film premiered. Marcos' reluctance to deal with the police (he's poor so he is afraid of the inherent classism of the legal system), his buying of perfume to cover up the smell of the bodies, his disinterest in the lusty Rosa… this all makes sense when viewed through that lens.

The cynic in me, however, cannot escape the reality that in many Spanish (and Italian and German) films of this sort, homosexuality is often used as a cheap red herring. Homosexuality was viewed as a perversion so if you needed a suspect for a murder, just introduce a gay character. Many gialli went so far as tying homosexuality with child rape and pedophilia. Whether CANNIBAL MAN condemns homosexuality or not is largely up to how you choose to view it.

But no matter what choice you make, your time spent with CANNIBAL MAN will be time well spent indeed. It isn't quite Crime & Punishment, but it isn't quite MANIAC either. It walks the line between the two, marrying exploitation shocks with genuine dramatic interest, and comes out the other side as a strangely fascinating, sometimes troubling film.