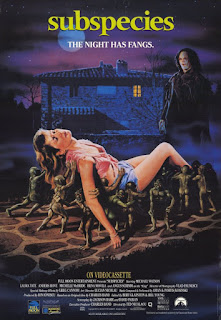 Vampires are boring. Just accept that fact and move on with your life.

Of course, there have been good movies with vampires in them, but vampires as an antagonistic group, as villains or foils… they're boring. Dog shit boring. They're invariably pouting, insufferable, depressing, chalk-faced personality vacuums. You have to try, really try, to make vampires interesting. The films that do it best tend to use vampirism as some kind of abstraction or as a metaphor for mental health conditions, like George Romero's MARTIN or Jose Ramon Larraz's VAMPYRES. Sometimes a clever change of scenery can do a world of good, too. Do you honestly think the vampire heroes and villains of Buffy the Vampire Slayer would have been half as interesting if they weren't existing in some bizarrely hyperbolic high school comedy/drama setting? Of course not. They'd just be boring.

So needless to say, I was not looking forward to watching SUBSPECIES, the first installment in the weirdly popular franchise that Full Moon Entertainment launched in 1991. Truth be told, as much as I hate vampires and movies about vampires, when I find a good one, I love it to death. Why? Because it overcomes my natural inclination towards disliking anything having to do with pale-faced dipshits bemoaning their tragic existence. Takes one helluva movie to do that though and SUBSPECIES? Well, it's one helluva movie all right.

Let me try to make sense of this disjointed, abysmal mess. It kicks off with a lovely bit of patricide. Radu (yes, that's the name of the villain in this franchise) kills his father and takes possession of the bloodstone, a relic that perpetually drips the “blood of all saints”. Apparently, the bloodstone is to vampires what spinach is to Popeye the Sailor Man. Stefan, Radu's half-mortal (more on that in a second) brother doesn't approve of this whole thing, moping around the property (this all happens in a rundown castle somewhere in Romania) aimlessly until three young girls arrive to spend the week. Stefan takes a liking to one of them, the short-haired, personality-less Michelle, but Radu takes a liking to all three. So naturally, bad shit goes down and Stefan and Radu gear up for a fight to the death.

I don't know what else to say really. Between all the day-for-night nonsense, editing that creates more confusion than order, and the general lack of attention towards both pacing and believable dialogue, the film just left me wanting to claw my eyes out. It didn't help that Radu managed to be both hilariously awful to look at AND hilariously awful to listen to. He looks like Generic Vampire Extra #5 from any given Buffy the Vampire Slayer episode, drools constantly and talks in this hushed tone that I suppose is meant to make him sound threatening. He's just a laughable villain, a complete failure of a character. I guess I should give the filmmakers some credit for at least making a vampire villain instead of a whiny, pasty-faced shitburger that won't stop pissing and moaning about how terrible his existence is, but they just went way too far off the rails here. They even gave him ridiculously long fingers, like six or seven inches, that he snaps off his hand, the disembodied digits morphing into badly animated claymation monsters.

In other words, he's shit.

Now if only they left Stefan on the cutting room floor. Stefan is every inch the lovelorn dickhead vampire that I cannot stand. His romance with Michelle is like nails on the chalkboard of my brain, screeching loudly, shredding my will to live. Given that the film already offers up a Van Helsing-esque character, why drag the whole damn thing down with the same tired treacle of a romance story? Oh, look the vampire with eternal life has fallen in love with a mortal woman! Will she fall in love with him too? Will she eventually tell him that she can't live without him, allowing him to bite her to transform her into blahhhhhhhhhhhhhh

And I really don't understand how this whole “half mortal/half vampire” shit even works. Stefan still has to sleep during the day so he doesn't die in the sunlight. He still rests in a coffin. He's apparently immortal. So what exactly is there about the guy that's “half mortal”? He has fangs. He drinks blood. He's a vampire. I need to know what the hell is so different between this guy, a half mortal vampire, and his brother, a full-on vampire. Someone please tell me. They make the point of mentioning it several times in the film so it clearly means something. Is it just a ploy to get me to watch the rest of the movies? Does it actually mean something in the end? And aren't all vampires half-mortal? Michelle gets bitten by Stefan in the end so… she's half mortal, right? Are you not considered to be a true blue vampire unless your mommy and daddy were both vampires? I'm honestly asking here, people, because I'd kinda like to know, but there is no way in hell I'm ever sitting through a sequel to this garbage.
Posted by David Grant at 2:35:00 PM
Email ThisBlogThis!Share to TwitterShare to FacebookShare to Pinterest
Labels: 31 Days of Horror, Full Moon Entertainment, Subspecies