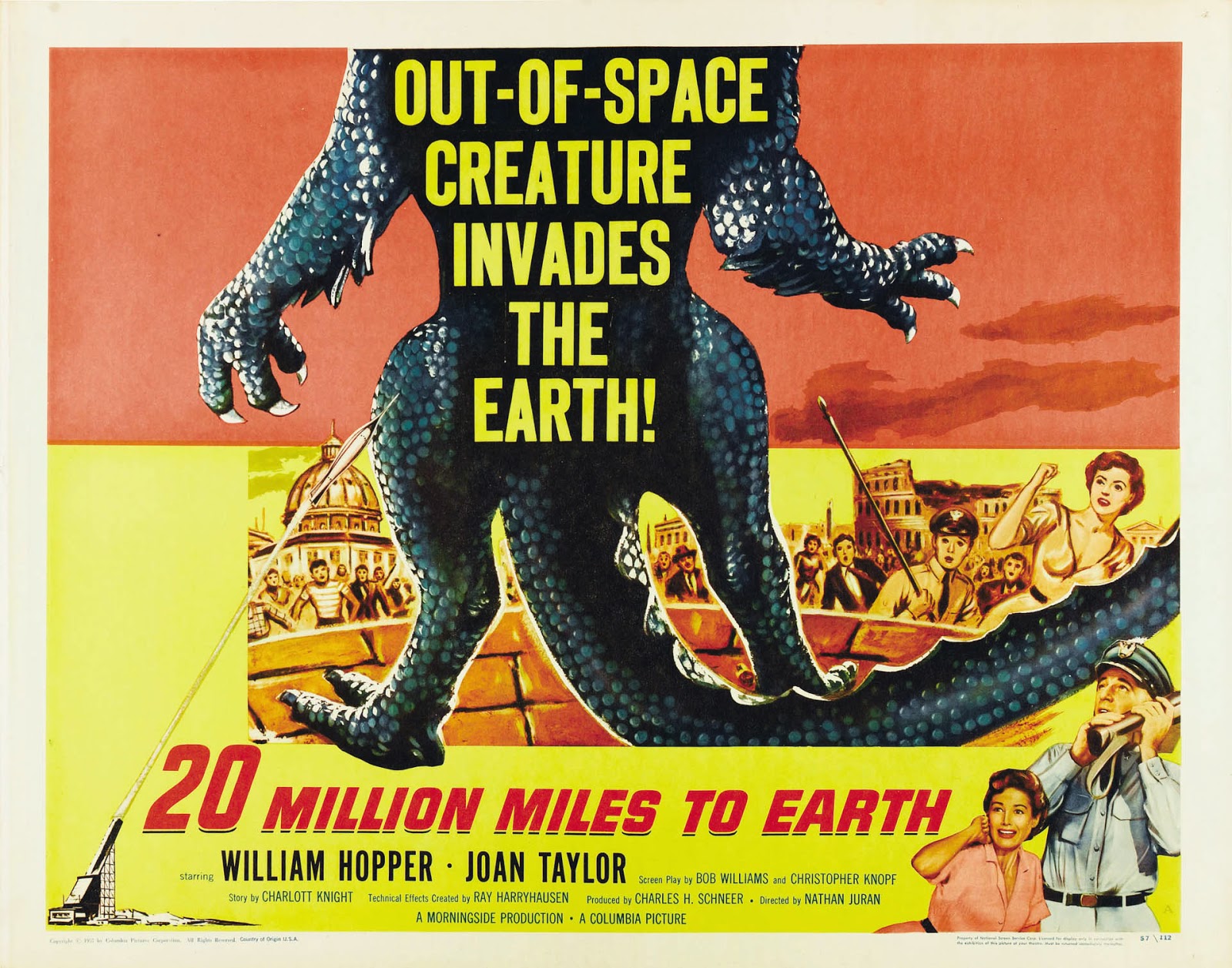 By now it should be obvious to you, Dear Reader, that I’m a massive fan of the Alien Invasion film, especially those made in the 1950s. But no matter how much of a fan I am, I sometimes need a break. So tonight I’m going to review a film that is only tangentially an Alien Invasion film, the great 20 MILLION MILES TO EARTH. Designed as a showcase piece for the stop motion animation and technical wizardry of Ray Harryhausen, 20 MILLION MILES TO EARTH would probably be best described as a “KING KONG for the space age”, a rollicking adventure about a manned voyage to Venus that ends tragically with the vehicle crashing into the Mediterranean on its flight back to Earth.

A couple of fisherman in Gerra, a small Sicilian fishing village, witness the crash and row out to the wreckage to search for survivors. Only two men survive the crash, the fatally ill Dr. Sherman and the spaceship’s captain Bob Calder. Later that day, a young, cowboy-obsessed boy named Pepe finds a metal cylinder washed up on the shore. Inside is a gelatinous blob that contains some kind of creature. Pepe sells the discovery to a traveling zoologist, Dr. Leonardo. Leonardo’s granddaughter, a medical school student named Marisa, volunteers to help the men found still alive in the spaceship (the local doctor is out of town) but cannot manage to save Dr. Sherman from his illness.

The United States military receives word that the spaceship crashed near Sicily and Major McIntosh, the man in charge of the project, heads to Italy, accompanied by scientist Justin Uhl. As Calder awaits their arrival, the creature inside the blob emerges inside Dr. Leonard’s trailer. Enthralled by the mysterious three foot tall creature, Dr. Leonardo and Marisa leave for Rome, locking the creature in a cage in the back of their trailer. By morning, the creature has tripled in size. By the time Calder, McIntosh and Uhl catch up to them, the creature has grown to the size of a man and has broken free from the cage.

The creature, known everywhere but in the movie itself as Ymir, wanders the countryside. It finds a small farm and seeks shelter inside the barn. Finding bags of sulfur, the creature’s natural food on Venus, the Ymir begins to eat, only to be attacked by the farmer’s dog. Hearing the commotion, the farmer enters the barn, rifle in hand. Before he can shoot, Calder and McIntosh arrive, now aided by the police force of Gerra. They attempt to capture the creature inside an animal cage but it escapes the barn, mauling the farmer in the process. The police commissioner of Gerra, no longer willing to cooperate with the Americans, decides they need to destroy the creature. Though they attack the Ymir head on, their weapons have no effect. Knowing that electricity can stun the Ymir into unconsciousness, Calder and Uhl devise a plan to capture the Ymir using a large metal net and several electric generators. They succeed and move the unconscious beast, now the size of an elephant, to a zoo in Rome. Keeping the Ymir under electric anesthetic, they begin examining the slumbering monstrosity. Unfortunately, a freak accident causes a massive power outage and the Ymir awakens, breaking free of the zoo and leaving a trail of panic through the streets of Rome.

The allusions to KING KONG are obvious. While Kong was captured for the sake of commercial exploitation, the Ymir is captured for the sake of scientific exploitation. By learning how the creature can survive on the hostile surface of Venus, the scientists seek to create a new breathing apparatus, all with the goal of stripping Venus of its natural minerals. However, the similarities with KING KONG are the strongest when it comes to the Ymir itself. A devotee and student of Willis O’Brien, the pioneering stop motion animation genius that provided the effects for KING KONG, Harryhausen followed in O’Brien’s footsteps by providing his creations with genuine emotion. Like Kong, the Ymir is nothing more than a wild animal set loose in an unfamiliar world. Small touches, like the way the scaly beast scratches it’s chin or adopts a curious posture when coming across a flock of sheep, help to make this ingenious creation of clay and metal into something incredibly lifelike.

Despite the modern advancements in computer generated imagery, I find stop motion animation to be spectacularly effective. We know intuitively that the CGI landscapes and battles of the later STAR WARS films or AVATAR are nothing more than fancy pieces of computer animation. As a result, I find the impact lessened. Though they may be impressive, they lack any real sense of tactility. They’re like air. But with stop motion, as jerky and bizarre as it may be, I know I am watching something real being manipulated behind the scenes. It’s a creation of an artist, no different that the photography it is usually being projected onto. While I was a great fan of Gareth Edward’s GODZILLA reboot, I prefer the Japanese films for much the same reason. Having these effects - these practical, real world effects - in the film is an invitation to enjoy the process of creating the film itself. Seeing the seams, seeing the way the film was created through multiple processes and a real combination of artisans and performers, helps the film transcend simple entertainment in a way computer generated imagery never could and never will.

20 MILLION MILES TO EARTH has its fair share of flaws. For example, we are told that the Ymir cannot be harmed by gunfire yet the creature is clearly being wounded by machine gun rounds and bazooka blasts at the climax. The love story between Calder and Marisa, while well handled, amounts to nothing in the end. The physical representations of the Ymir are all over the place. When the creature breaks free from the zoo, it engages in a royal rumble with an elephant. They are roughly the same size. But three scenes later, as Calder hides around the corner from the Ymir, it looks to have grown another 30 feet. A scene later, it is again the size of an elephant. Some of the rotoscope work is a bit dodgy as well and the performances rarely register the emotional tone the film needs. But I could not care less about any of that.

What 20 MILLION MILES TO EARTH ultimately is in the end is a visual feast for lovers of stop motion animation and practical effects. Every time I watch the film, it astounds me. The level of detail and the sheer display of the artistic excellence of Harryhausen’s work elevates this film completely, turning what could have been a disposable sci-fi yarn into a genuine classic of the genre.

Posted by David Grant at 8:47:00 PM
Email ThisBlogThis!Share to TwitterShare to FacebookShare to Pinterest
Labels: 20 Million Miles to Earth, 31 Days of Horror