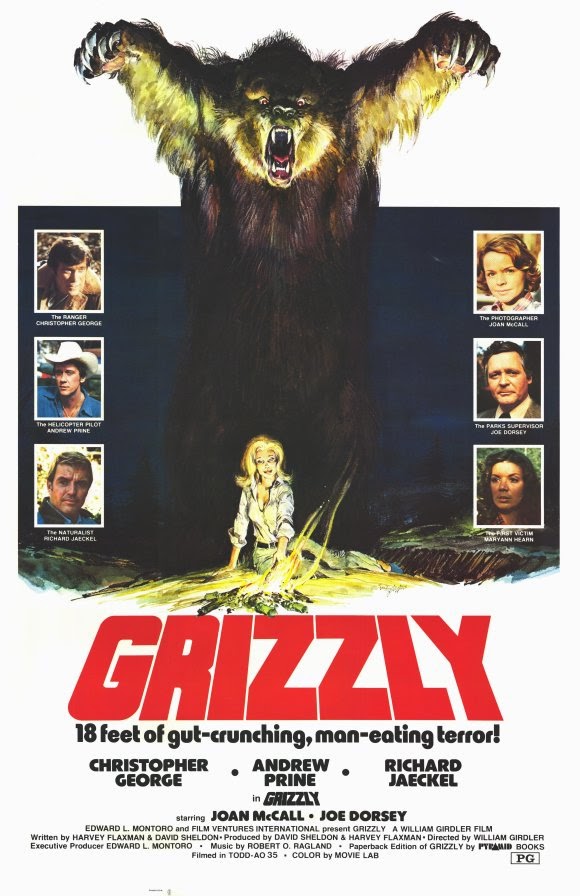 Like ORCA: THE KILLER WHALE, GRIZZLY is a JAWS knock-off. The structure is the same, the character dynamics are the same, the score is pretty damn similar and the films both end with an animal exploding into bits and pieces. But unlike JAWS and ORCA, this time the hunt, chase and splatter would happen on land. In place of a massive great white shark, we have a massive grizzly bear. We’re told that this bear is almost 18 feet tall, weighs about 2,000 pounds and is not even of this geological period. This is a million year old creature, a Pleistocene-era killer that knocks off its victims with a Jason Voorhees level of skill. That’s right, a one million year old massive walking beast, all raw power and teeth and claws because sharks are total pussies.

And what are you going to do when this bad ass killer starts knocking off people in your national park? Why, call Christopher George, of course. And that’s just what happens after the mutilated bodies of two girls are found. Chief Ranger Michael Kelly (played by George) has the blame laid upon him by the asshole park supervisor. Kelly was supposed to have moved all the bears out of the park by now. It’s tourist season. No one wants to come by and spend money with a bunch of bear prowling the woods. Kelly calls his friend, a naturalist named Arthur Scott, to inquire about the local bears. It’s Scott’s opinion that the girls were not killed by any local bear.

As more bodies start piling up, Kelly, his helicopter pilot friend Don Stober, and Scott try to convince the park supervisor to close the doors. Naturally, he refuses. Hunters from all over the state start pouring into the woods, trying to kill the bear responsible for all these deaths. It’s frustration after frustration until the bear does the unthinkable and mauls a child. Gloves now off, the park supervisor closes the doors and Kelly and Co. get down to business.

Simply put, this movie is great fun. It’s a completely absurd, completely generic monster flick, with fake grizzly bear arms bursting through walls to grab cute screaming girls, an unconvincing attempt to make a normal bear look like a Goliath and a finale that features Christopher George turning a bear into pudding with a bazooka. With all the cheesy attempts at suspense, horrible dialogue and tomato paste splatter scenes going on, you would expect the movie to be a constant laugh riot, but the performances of the main trio (George, the always great Andrew Prine and Richard Jaeckel) are surprisingly good and played remarkably straight. As a result, the film never descends into the realm of inane camp. Yes, GRIZZLY is remarkably stupid and corny but it’s at least respectably stupid and corny.
Posted by David Grant at 10:45:00 PM
Email ThisBlogThis!Share to TwitterShare to FacebookShare to Pinterest
Labels: 31 Days of Horror, Grizzly