FIEND WITHOUT A FACE 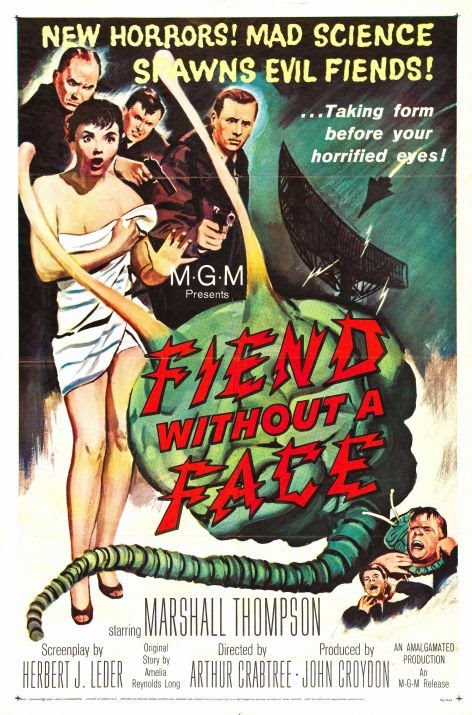 After a rash of unexplained deaths in a small farming community near an American nuclear military facility, Major Jeff Cummings begins an investigation. As the townsfolk of Winthorp, a small Canadian town in Manitoba, are not too happy with all the military disturbances, no one seems too willing to cooperate with Cummings. Even the town mayor gives him the cold shoulder. As more and more bodies turn up with their brains and spinal cords missing, Cummings meets Professor Walgate, a retired scientist whose life work has revolved around the study of thought projection. Walgate eventually comes clean. The murders are being committed by creatures he created through an experiment gone wrong. These invisible killers, feeding off the radiation from the nuclear facility, are growing stronger by the day. Worse, they’ve been using humans as breeding stock, robbing them of their brains and spinal cords to produce new members of their hideous species.

FIEND WITHOUT A FACE is a reserved chiller. That’s to say that the film plays out with a serious, somber look on its face. The serious presentation naturally comes into conflict with the subject matter. We’re given this ludicrous explanation for the killings – crawling, chirping brain things with tiny insect legs and spinal cord whips for tails that, for some unexplained reason, feed off nuclear energy and were spawned from the thoughts of a scientist – and every character in the room just goes “well, OK then”. There is no real sense of fun behind the proceedings here and that results in a film that doesn’t contain much in the way of easy entertainment.

But I’m not sure that this film was meant to be easy entertainment in the way other B movies were intended. The film is positively laden with cynicism and contains major whiffs of anti-military/anti-government sentiment. The finale of the film, an all out assault against the boarded up shelter of our protagonists, is right out of NIGHT OF THE LIVING DEAD. The violence, though tame by today’s standards, is pretty strong at times and the gory way the brains erupt with blood when shot must have turned some stomachs back in 1958. So the cheesy B movie subject matter is always in direct conflict with the serious, matter of fact manner in which the story is told. The result is a film with a bit of an identity crisis but I still have to recommend it as it is well made, well acted and has a genuinely intriguing narrative.