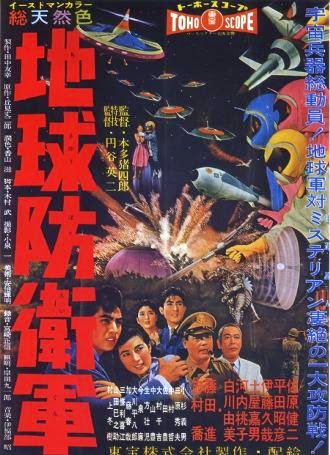 After the surprise successes of GOJIRA and GODZILLA RAIDS AGAIN, Toho, the famed Japanese production company once reluctant to create mere popular entertainment, jumped head first into the profitable waters of the science fiction B movie. Toho’s first B movie project after GODZILLA RAIDS AGAIN was another kaiju feature, RODAN, a classic creature feature about a giant pterodactyl-like monster terrorizing Japan. The next project, THE MYSTERIANS, was a great departure from the monster films that came before it. While GOJIRA and its offspring were clearly influenced by American monster films like THE BEAST FROM 20,000 FATHOMS, THE MYSTERIANS would draw its inspiration from American alien invasion movies.

Following the disappearance of Ryoichi Shiraishi, an astrophysicist, strange phenomenon begins occurring in a small Japanese town.  After the town is all but destroyed by an earthquake, a massive robot called Moguera appears. Leaving a trail of destruction in its wake, Moguera begins wreaking havoc throughout the area. Once the military is able to destroy the lumbering beast, Joji Atsumi, a friend of the missing Shiraishi, begins analyzing the remains. Atsumi discovers that the robot is made of a material not found on Earth. More troubling, astronomers begin noticing something strange in the night sky, a bizarre occurrence from behind the moon. Before his disappearance, Shiraishi was working on a report. In this unfinished document, Shiraishi shares a new discovery, a large asteroid that he believes was once a planet. He has called this asteroid, Mysteroid.

Before you can say “I’ve seen this all before”, the aliens make their presence known. A large domed spacecraft, capable of burrowing deep into the Earth, emerges near Mount Fuji. The aliens meet with Atsumi and a handful of other scientists. The aliens are called the Mysterians, a highly intelligent race of humanoid creatures whose planet has been destroyed in a nuclear war. They seek shelter on Earth, asking for several miles of land they can call home. But they also ask for something else. They need to procreate and want permission to “inter-marry” with human females. They even have a list prepared of the women they want first. On that list are Hiroko, Shiraishi’s ex- fiancee, and Etsuko, Shiraishi’s sister. When Japanese leaders balk at the demands, the military begins planning their assaults. Then a shocking discovery is made. Shiraishi, thought dead, is aboard the Mysterian craft, working alongside them. He urges Atsumi and others to listen to the Mysterians, to help them. But his request is ignored and the Japanese forces begin their assault against the far more advanced, far more ruthless invaders.

This is pure American Alien Invasion stuff but where THE MYSTERIANS really shines is in its presentation. Simply put, this film looks and sounds fantastic (try to see it in the original Japanese though as the dubbing in the American release is horrible). And it’s little wonder why. Behind the camera were director Ishiro Honda, cinematographer Hajime Koizumi and special effects mastermind Eiji Tsuburaya. Honda and Tsuburaya were responsible for bringing the enormous spectacle of the first two GODZILLA films to life. Their work here eclipses both of those films. A brilliant mix of camera angles, supremely detailed miniatures and photographic effects, the battle scenes in THE MYSTERIANS are simply amazing to behold. There is a special craft involved in making these scenes work and there is little doubt that Honda and Tsuburaya were (and still are) the masters of this craft. THE MYSTERIANS was also the first film of its kind to be shot in TohoScope. As a result, THE MYSTERIANS is a bright, vibrant film full of color, the perfect film to show off Koizumi’s considerable talent. All in all, this was perhaps the best possible film for these three men to make together.

The inclusion of Moguera, who would be reborn much later in GODZILLA VS SPACE GODZILLA, was the idea of producer Tomoyuki Tanaka. Kaiju were great box office draws and Tanaka wanted to include a monster in the film as an advertising hook. When THE MYSTERIANS went on to find success at the box office, the Alien Invasion film and the kaiju film were forever linked together at Toho (or at least through the late 1960s). Of the three GODZILLA films that followed, two would use the same basic narrative ideas of THE MYSTERIANS. GODZILLA VS MONSTER ZERO and GHIDORAH, THE THREE HEADED MONSTER would be monster films with human stories involving invading aliens. Both films would be, pardon the pun, monster successes.

But today, THE MYSTERIANS remains a relatively unknown film in the Toho library, really only finding cult success with die hard GODZILLA fans, primarily because of the appearance of Moguera. It's a damn shame as this is genuinely good fun and really packs more eye candy into its relatively brief running time than most modern blockbusters. Regardless of how you feel about the story, you can't help but be awed by it. It might not get much of the spotlight but make no doubt about it, THE MYSTERIANS is one of the best films of its kind.
Posted by David Grant at 9:39:00 PM
Email ThisBlogThis!Share to TwitterShare to FacebookShare to Pinterest
Labels: 31 Days of Horror, The Mysterians