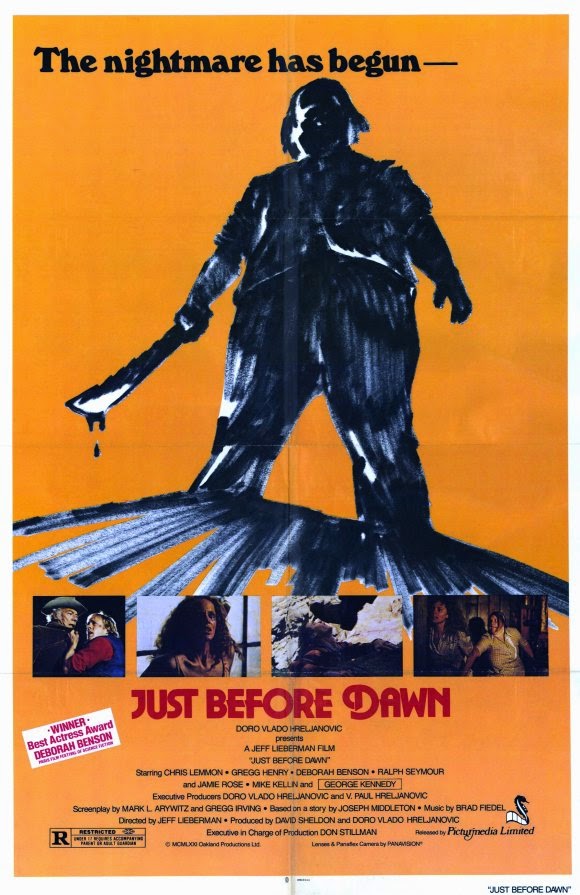 In 1981, the slasher film was still in its early years. The formula had yet to be set in stone and as a result the whole sub-genre was a malleable monstrosity searching for an identity. Sure, some of the elements, the ones buried deep in the DNA, were already there. The violence, the isolated settings, the exploitative sexuality… all accounted for, but the rules that needed followed were still being toyed around with. Presentations swung wildly from the artistic to the exploitative, from the bowels of the grindhouses to slickly designed studio releases. Some films were straight out gore factories, cinematic abattoirs full of sliced flesh, and some played by the more classical rules of Hitchcock and Clouzot. Truth be told, the only interesting period in the history of the slasher film was these early times, from between 1979 and 1982, a time when you didn’t know beat for beat what a film was really going to be before the damn thing even started.

Jeff Lieberman’s JUST BEFORE DAWN was released in 1981 and is as much DELIVERANCE as it is FRIDAY THE 13th, maybe even a little more so. It all starts with two hunters, Ty and Vachel, having a good ol’ time inside a makeshift church deep in the woods of Oregon. A very large and very inbred killer shows up. The hulking madman impales Vachel through the groin with a machete and then chases Ty into the woods. Meanwhile, five campers are on their way to a stretch of land high up the mountain for a weekend of fun and relaxation. In charge is Warren, a gung ho outdoorsman and Connie, his equally outdoor friendly girlfriend. They’re warned twice not to continue their journey, first by a forest ranger (played by the always excellent George Kennedy) and again by the crazed Ty. Ty tells them about the “demons” in the woods. Thinking him crazy, our clueless bunch brush him off and continue to the campsite, unaware that the killer is hitching a ride on top of their camper.

After setting up, things start happening. While skinny dipping, one of the teenagers feels someone touching her beneath the water. The gang keeps coming across a woman in a white dress named Merry. Merry’s strange family shows up at their campsite one night, shotgun in hand, warning them to leave before they “raise the devil”. Soon enough, our obese killer shows up and knocks off one of the group. Finding the body, Warren and Connie set out to warn their friends. They never get the chance. It turns out that our killer is not alone. He has an identical twin and the two murderers set about killing our heroes one at a time.

Now from that synopsis, you might think you know what this film is. It’s just a slasher, right? Well, no. So much of JUST BEFORE DAWN is about setting the mood. There are very few false scares, very few moments of cat and mouse suspense and even less in the way of graphic violence. This is a film that lives or dies on its ability to encapsulate you within the wilderness on the screen. Like the aforementioned DELIVERANCE, this is a film about surviving in nature and, again like DELIVERANCE, this is a film about our inner nature, the animalistic traits and tendencies “civilized” society has yet to fully rid us of. Without spoiling the ending, there is a moment when our lead character seems to reject the normal, civilized standards and practices foisted upon them by society and devolves, so to speak, into a full on attacking mammal. The final coup de grace delivered to the killer is downright chilling in its ferocity, even though not a single drop of blood is spilled.

Because JUST BEFORE DAWN is mostly atmosphere, those wanting fast paced chills and kills will have to look elsewhere. This isn’t a film concerned with a body count. It is an expertly crafted, very deliberate thriller, one with more on its mind that simple scares. It does indulge itself a little bit with a few neat shocks here and there (and an extended topless scene for the pervs), but it mostly plays out in slow low key fashion, allowing a nice, steady climb in intensity before the brilliant, exciting finale.
Posted by David Grant at 10:12:00 PM
Email ThisBlogThis!Share to TwitterShare to FacebookShare to Pinterest
Labels: 31 Days of Horror, Just Before Dawn