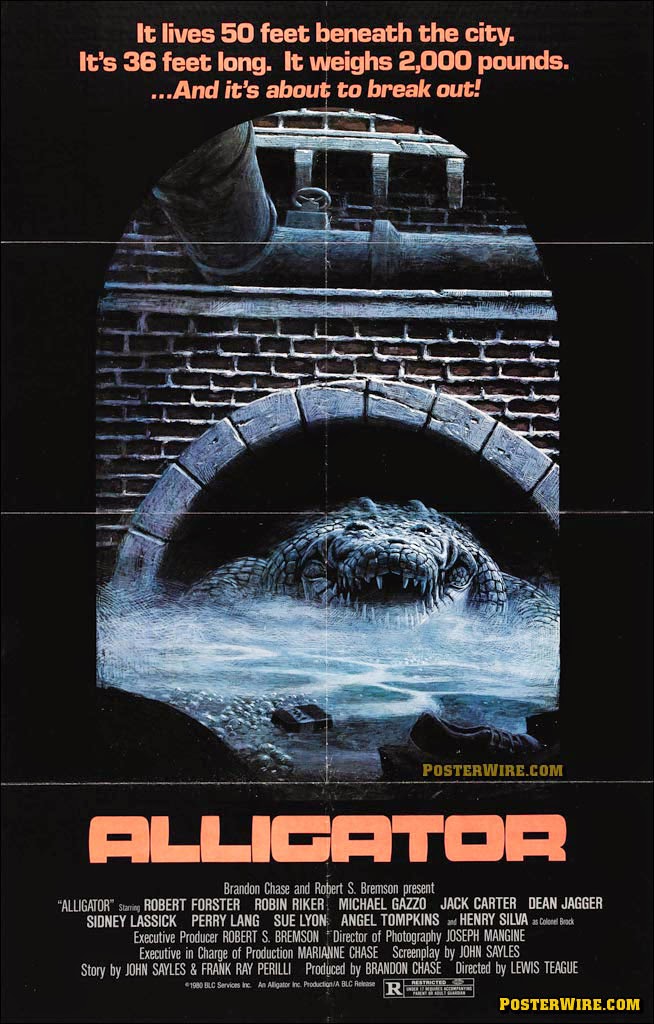 It’s that old urban legend. A family from Florida returns to their big city home. During their trip, they purchased a baby alligator as a pet for their daughter. Once home, they realize their error and decide to flush the baby alligator down the toilet. The animal survives and grows to adulthood, eventually attacking people in the sewers. It’s one of the most popular urban legends around, even going back to the 1920s. Lewis Teague’s 1980 creature feature ALLIGATOR uses the urban legend as its jumping off point, only changing one small detail. Instead of simply growing up in the sewers, what if the baby alligator survived off the corpses of animals? And what if those animals were the failed test cases for new batches of growth hormones?

That’s precisely what has happened here. The tiny alligator has now grown to the size of a car thanks to the chemical laced meat it’s been eating. There’s another nasty side effect of the drugs as well, an increased metabolism that results in an insatiable appetite. As the beast gobbles down more and more sewer workers, body parts begin to show up in drainage ditches all over Chicago. Police detective David Madison and his partner head into the sewers to investigate but end up coming face to face with the alligator. David manages to escape. His partner isn’t so lucky. The police chief puts David in touch with a reptile expert named Marisa Kendall. As more and more people are killed, David and Marisa fall in love. Eventually, the alligator emerges from the sewers and begins attacking people on the street.

ALLIGATOR was written by John Sayles, the great writer/director who used the paychecks he received from writing low rent horror films to fund his more personal, ambitious projects. Sayles reminds me quite a bit of Larry Cohen, that other great B movie madman. Both writers have a real wicked and cynical sense of humor. Both writers like to take outlandish situations and throw realistic solutions at them. Sayles’ script for ALLIGATOR is the films strongest element. It’s corny and campy like any great monster film should be, but it contains moments of real cynical glee, like the hordes of shit-slinging merchandise dealers descending upon the city to sell plastic alligators and t-shirts during the time of the crisis.

Sayles understands the B movie well from his days as a script writer working under Roger Corman. He knows what the audience expects and he throws curve balls all along the way. In my opinion, the ending of the film is absolutely genius in how it confounds expectations. In any other film, the final act would contain an all-out action set piece, the hero desperately trying to best the beast before the bomb he set goes off, killing them both. There would be an epic struggle, the hero would be victorious and then the final race to safety before the timer reaches zero. But that would be too easy for Sayles. Here, the hero’s safety lies solely on Marisa’s ability to get a cranky old lady to move her car.

Unlike DEADLY EYES, the James Herbert adaptation I reviewed the other day, the effects work here is at least mildly convincing. Use of miniatures and very detailed puppets gives the title creature some personality and some genuine menace. The tooth-on-flesh details are bloody, with limbs bitten off and children reduced to chunks of meat, and the attack scenes (especially the all out massacre of city officials and guests at a fundraiser event) are entertaining and exciting. The dialogue is witty and charming, with all the usual clichés and tropes presented in a winking, aware fashion. Unlike most monster films, ALLIGATOR realizes how ridiculous it is and runs with it. That results in a film that is not only loud and bloody but also fun. And yes, I have fun with ALLIGATOR. It’s just a good, old fashioned, cheesy monster flick.
Posted by David Grant at 11:48:00 PM
Email ThisBlogThis!Share to TwitterShare to FacebookShare to Pinterest
Labels: 31 Days of Horror, Alligator