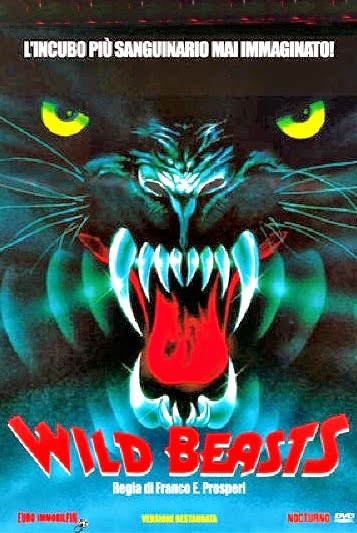 The first minute of WILD BEASTS might tip you off that you’re watching a Franco Prosperi film. A quickly edited series of juxtapositions, of syringes and running water, of skyscrapers and highways, of smokestacks and wild animals, all set to some harmless pop song. The following minute or so will definitely clue you in that you’re watching a Prosperi film. In close up, several horse heads are cleaved in half by zoo workers, the bloody chunks fed to lions. WILD BEASTS was made in 1984, almost a decade after Prosperi directed his final Mondo film, but it becomes crystal clear as the film goes on that Prosperi didn’t leave his Mondo tactics in the past.

The plot is basically non-existent. Animals from a zoo (located somewhere in an unnamed “Northern European city”) go batshit crazy after drinking PCP laced water. A veterinarian and his single mother love interest go about trying to peacefully capture the animals using tranquilizers before the army of lions, cheetahs and elephants (not to mention a very pissed off polar bear that attacks a dance class aforementioned love interest’s pre-teen daughter is attending) can kill off more innocent people.

If you’re not familiar with Prosperi and his Mondo films, you might be a little shocked by some of the real life animal violence contained in the film. For little more than shock value, Prosperi throws a house cat into the middle of a swarm of rats. Those very same rats are then set on fire. Prosperi films a caged pig being attacked by hyenas and a caged cow is fed to lions. And let’s be clear about one thing: WILD BEASTS is a damn nasty and graphically violent film without all of the animal violence. The Mondo tactic of killing animals for shock value did not even need to be used here. There were more than enough bloody kills to work on the collective gag reflex of the audience.

Even more troubling, Prosperi’s penchant for exploiting children rears its ugly head too. When the pre-pubescent daughter is introduced, we first see her lying on a bed, her shirt wide open. Prosperi’s decision to shoot a topless scene involving a girl no more than 10 or 11 might shock you (Prosperi goes on to have the young girl strut around the house in her underwear for a full two minutes afterwards) if you’re not familiar with the man’s work. This is the same director who all but included child pornography in his Mondo GOODBYE, UNCLE TOM, his camera moving slowly over the genitals of several male and female children. Once the girl reaches her dance class and puts on her baby blue leotard, Prosperi makes a point to keep her crotch prominently featured in every single frame she’s in. It is absolutely disgusting stuff. Together with the animal violence, the sexualization of a child makes WILD BEASTS feel particularly sleazy.

And the fact of the matter is that WILD BEASTS could have been a somewhat enjoyable shocker without all that unethical, immoral horseshit. There are lots of laughable moments (the polar bear attack scene is absolute gold), some really striking visual scenes (the long tracking shot of a cheetah walking down an empty city street is gorgeous) and some downright nasty gore effects. It didn’t need to be this disgusting piece of trash. But I suppose that’s asking too much of Prosperi.

If you want more information about Prosperi and his Mondo films, I discuss them in my review of CANNIBAL HOLOCAUST.

Posted by David Grant at 1:43:00 PM
Email ThisBlogThis!Share to TwitterShare to FacebookShare to Pinterest
Labels: 31 Days of Horror, Wild Beasts