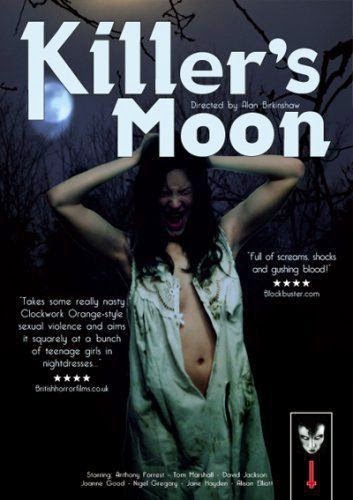 A school bus full of teenage girls and their two guardians breaks down on a country road. Taking shelter in a hotel out in the middle of nowhere, the girls come under attack by a group of four escaped lunatics, all the in throes of a shared delusion, that everything around them is just a dream. Not believing in reality around them, the madmen start raping and killing the girls because why not? It’s not real anyway. It’s just a dream.

Equal parts A CLOCKWORK ORANGE and I SPIT ON YOUR GRAVE, KILLER’S MOON contains the violent and sexually depraved content of the aforementioned films but none of the intellect. The film seems to go out of its way to rob itself of any ability to shock thanks to its broad attempts at humor and characterization that borders on caricature. The madmen in particular are unthreatening and unbelievably clichéd, all but running around loudly proclaiming “we’re SOOO insane, don’t you know?” The violence and is handled in such a gentle and simplistic manner that it barely registers as violence. Worse still, the handling of the sexual violence is dismissive and downright condescending, the best example being a girl telling a victim that it “was only rape… pretend it never happened”.

The film seems to think that rape and violence is a common desire. One character remarks that in his dreams, he rapes and murders at will, like it is part of our nature to commit horrible crimes, especially when we feel like no one will catch us in the act. Informed by this statement, the film comes off as more of a celebration of violent crime, sexual and otherwise, than a condemnation of it, something that can’t be said of either A CLOCKWORK ORANGE or I SPIT ON YOUR GRAVE. The films heroic protagonists, two skirt-chasing campers, feel like they’re in a completely different film, only there to help bring the film to an end rather than to rebuke the psychopathic, cynical delirium embraced by the madmen.

Even if we look past the poisonous subtext and utter lack of redeeming moral sentiment, the film lacks anything to recommend it by. Visually, KILLER’S MOON is a goddamn mess, littered with confusing night for day lighting set-ups, dialogue that lacks any kind of personality and performances that border on the level of direct-to-DVD pornography. There’s not a single drop of subtlety or wit in the whole film and the pacing, if you can call it that, vacillates wildly between snail-paced and lightning fast. You can tell that KILLER’S MOON is trying to be disturbing and edgy, but it doesn’t understand what makes something disturbing or edgy. It is the exploitation film equivalent to a kid opening his mouth at the dinner table, showing off the wet gloop of food and spit sitting on his tongue, just a ridiculous, amateurish mess.
Posted by David Grant at 3:51:00 PM
Email ThisBlogThis!Share to TwitterShare to FacebookShare to Pinterest
Labels: 31 Days of Horror, Killer's Moon