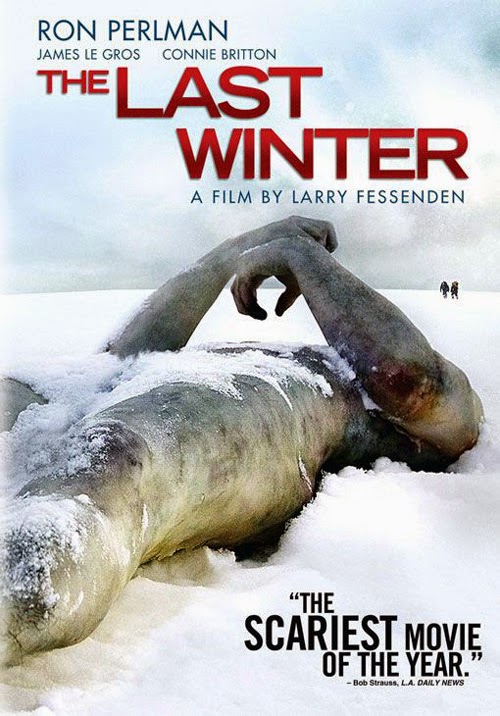 THE LAST WINTER is An Inconvenient Truth meets POLTERGEIST. In Larry Fessenden’s film, the Earth is the burial ground and all civilization is the house built on top of it. One of the most interesting ideas the film offers up is that oil, the precious lifeblood of the American energy system, is really nothing more than the remains of animal and plants, all the things that were once living before we humans came along, and like necklaces, baubles and antique dolls that often carry the spectral taint of their now dead owners, the oil we are sucking from the Earth is contaminated by the ghosts of ancient things we don’t understand. By drilling and rending the Earth, we have unleashed the vengeful ghosts.

This is a fantastic starting point for a film. I’m surprised it hasn’t been used many times before. But THE LAST WINTER might not be a supernatural thriller at all. The other explanation for all the spooky goings-on is purely psychological. Depending on how you choose to see the film, your experience can change completely. That alone makes THE LAST WINTER much more interesting than virtually any other eco-horror film around.

The plot revolves around two men with conflicting ideologies. On one side of the spectrum is Ed Pollack, a rough, brash oil man. On the other is James Hoffman, an environmentalist. Pollack works for a large oil company and is in charge of planning and executing a new oil pipeline construction somewhere in northern Alaska. Hoffman is on hand to report back the findings of his ecological studies, making sure that whatever operations Pollack puts in place will not cause undue harm to the environment or to the workers. Pollack desperately wants to bring in the construction equipment but Hoffman refuses to sign the permission forms. He warns Pollack that the environment is unstable. The ice is melting and the temperature is too warm. The machinery will not survive the trip. Further escalating the tension between the two men is the fact that Hoffman has been bedding Abby Sellers, Pollack’s right hand woman and ex-lover.

As the days wear on and disagreements break out, strange things begin happening at the research and development camp. Other members of the team (which include a pair of Native American workers, a stoner mechanic, Hoffman’s nervous aide and a young, inexperienced oil worker only there to prove to his magnate father that he can handle the work) begin having hallucinations and hearing strange sounds. Sudden gusts of wind break out and they experience a highly unusual rain storm. The daddy’s boy oil worker goes missing only to be found frozen in the snow, his eyes pecked out by ravens. Hoffman suggests that they are being poisoned by sour gas as a result of the permafrost melting. One of the Indians remarks that the cause might very well be the Wendigo, an ancient, vengeful beast. One of the major strengths of the film is that Fessenden never tells us which one of those theories is correct.

Taken as a ghost story, THE LAST WINTER works incredibly well. The use of sound in particular is great, with the slow drumming sounds of ghostly hooves gently whispering behind gusts of wind. The subtlety Fessenden shows in handling the scares is impeccable. It is a film that frightens more through mood than jump scares, often with little more to work with than dark corridors or wide open spaces. There are no jump scares here, no hyperbolic shocks or exaggerations. All Fessenden does is suggest over and over, and so strongly and convincingly that the mysterious appearance of animal prints in the fresh white snow feels like the pulling back of the shower curtain in PSYCHO.

More interesting is viewing the film from the psychological perspective. Many times, Fessenden hints that any particular event is being imagined by one particular member of the group. After finding the camcorder the young man was carrying when he wandered out into the cold to freeze to death, the group watches the footage. We see Hoffman’s face. We then see, on the footage, some ghostly apparition rise up behind the man. When we reverse shot back to Hoffman, he reacts strongly. No one else seems to share his shock. This editing trick is used repeatedly through the film. Watching it from this perspective makes every event suspect. How much of the film is real and how much is imagined? Lost in the frozen wilderness, Hoffman tells Abby over a walkie talkie that he cannot be sure if any of what he is seeing is really happening. Neither can we.

Global warming is a hot button topic these days, hotly debated with belief in the subject more determined by political ideology than actual examination of the evidence. I won’t bother with my personal beliefs here (yes, it’s real and yes, we’re causing some of it) but I’ll say that the apocalyptic ending of the film feels more and more like an oncoming reality. While THE LAST WINTER takes a few opportunities to preach an eco-friendly message to the audience, it avoids the more heavy handed tone of most message movies. It doesn’t matter if you buy into the global warming phenomenon or not. Just sit back and revel in what is one of the best and unfortunately overlooked horror films of the past decade.

Posted by David Grant at 8:28:00 PM
Email ThisBlogThis!Share to TwitterShare to FacebookShare to Pinterest
Labels: 31 Days of Horror, The Last Winter