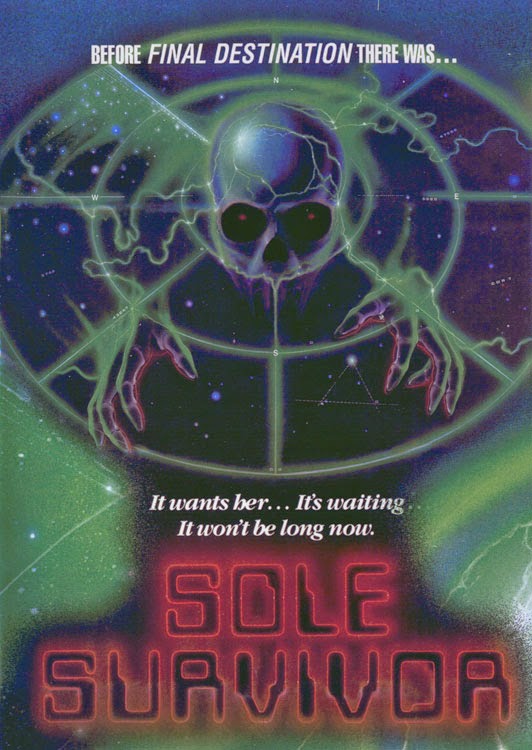 The front of the DVD cover informs me that “before FINAL DESTINATION there was” SOLE SURVIVOR, a movie that might have had a cover that read “before FROM THE DEAD OF NIGHT there was” if James Wong and Co. never entered the industry. Well, probably not. No one seems to remember FROM THE DEAD OF NIGHT. I remember it quite well. It was one of the few NBC Movie of the Week films that actually sticks out in my memory, a reasonably well done little chiller that lifts quite a bit from CARNIVAL OF SOULS and even a little bit from SOLE SURVIVOR. But that’s a film I’ll get around to some other time. For now, let’s focus on the matter at hand.

A television commercial producer named Denise is the sole survivor of a plane crash. She is examined by a Brian, a resident at a local hospital, and declared fit for discharge. Denise and Brian later enter into a romantic relationship. Shortly after leaving the hospital, Denise begins experiencing strange (possibly) hallucinations. She first sees a young girl, dripping wet, outside the hospital. Later she begins seeing men, all dead eyed and gawking, around her home and in the city. Brian puts this all down to survivor’s guilt but Kristy, an aged actress (and tormented psychic) working on a commercial with Denise, tells her that something more sinister is afoot. And she mustn’t tell anyone as spilling the beans that death is coming for her will result in more than just her own demise.

SOLE SURVIVOR would have fit in quite well alongside FROM THE DEAD OF NIGHT on television. Remove a few nipples from the film (including a pair belonging to scream queen Brinke Stevens) and you would have a perfectly serviceable film with well placed commercial breaks to break the monotony. Because that is the biggest problem with SOLE SURVIVOR. It is quite simply dull. Not too much happens during the running time of the film. We have a scene of Denise’s well endowed, super cute neighbor being drowned in a pool, a few creepy set pieces involving men with blank expressions coming ever so closer to our heroine and… yep, that’s about it. The film never really takes off, despite good performances and an always interesting story concept.

If there’s one really good thing about SOLE SURVIVOR, it’s the ending. But I can’t exactly talk about that as it would spoil the surprise and I don’t want to do that. Simply put, I didn’t exactly see it coming and it left a strong enough impression on me that I can’t quite condemn the whole film. It’s slow and tedious, sure, but the performances are decent, the whole thing looks passable and the resolution is fantastic (barring the very short scene before the credits, that is). So I’m going to have to recommend this one. I might have just not been in the proper mood tonight to fully enjoy the film but I can say for certain that I enjoyed the last fifteen minutes. Make of that what you will.
Posted by David Grant at 10:17:00 PM
Email ThisBlogThis!Share to TwitterShare to FacebookShare to Pinterest
Labels: 31 Days of Horror, Sole Survivor