EARTH VS. THE FLYING SAUCERS 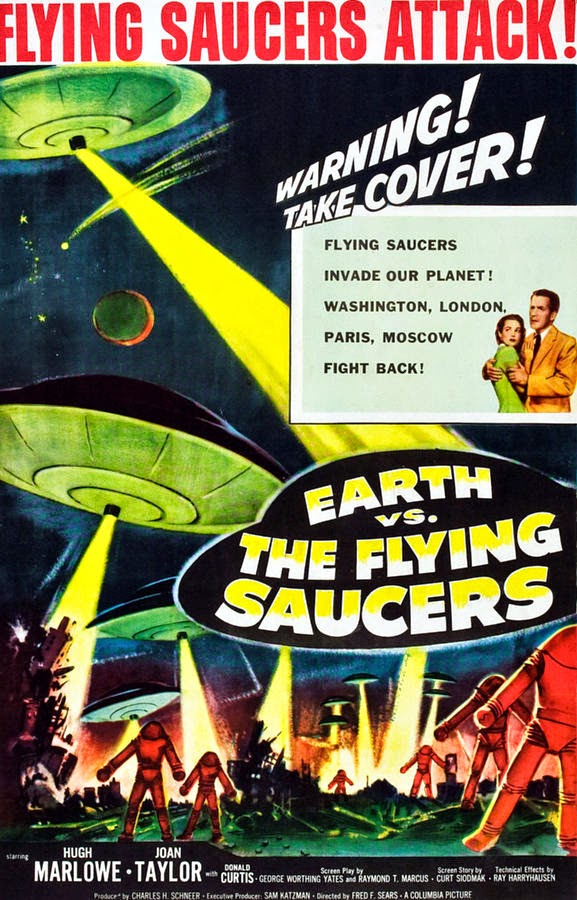 Read enough film criticism and you’ll run into the concept of the “testimony film”. Simply put, a testimony film is a single film in a director’s oeuvre that sums up all of the director’s thematic and visual idiosyncrasies. If we could apply that to sub genres for a moment, the testimony film of the Alien Invasion movie would be this film, EARTH VS. THE FLYING SAUCERS. All of the familiar tropes are here. The main thematic elements (the thinly veiled Second Red Scare politics, the distrust of science, the belief in American exceptionalism, the pro-military propaganda, etc.) are all front and center. If you were looking for an introduction into the world of American science fiction B movies, this is definitely the place to start.

American scientist Russell Marvin and his new bride Carol encounter a flying saucer while driving to work. Busying recording notes at the time, Russell manages to capture the audio of the encounter on his tape recorder. After they arrive at their destination, the launch location for Skyhook, a military communications satellite program, Carol’s father, Army General John Hanley, arrives and asks Russell to halt the launch of the eleventh rocket. Russell refuses, stating that they have a firm launch schedule. Later that night over coffee and barbeque, the General fills Russell in on some bad news. The previous ten Skyhook satellites have all been knocked out of orbit, crashing back to Earth. Shortly thereafter, they personally witness the eleventh satellite reentering Earth’s atmosphere, burning up as it streaks across the sky. Marvin tells Hanley of his encounter with the flying saucer and wonders if the aliens might have had a hand in the failed satellites.

The next day, a flying saucer lands outside the launch facility just before the launch of the twelfth and final Skyhook rocket. The military quickly surrounds the saucer and opens fire when three strange humanoid creatures emerge. One alien is killed and the others lay waste to the facility before boarding the saucer, kidnapping Hanley and flying off. Trapped underground with quickly failing generators, Marvin listens to the audio recording. Due to the failing power, the recording plays back in a slowed down manner. The sounds of the saucer on the recording suddenly become recognizable words. It is a message from the aliens requesting a meeting with Marvin. That is why the saucer appeared.

After their rescue, Marvin tries to convince the military of his story. When they prove to be less than cooperative, Marvin uses a short wave radio to contact the alien craft. Once again seeking a meeting, the aliens tell Marvin to meet them in a few short hours. Running off on his own, Marvin sets out to meet the aliens. Frightened for his safety, Carol enlists Major Huglin to bring her husband back. When they arrive at the designated meeting place, Marvin, Carol and Huglin (and a very unlucky motorcycle cop) enter the flying saucer. It flies away from Earth and the aliens reveal themselves to the humans aboard the ship. Speaking through a translation device (and using the knowledge gleaned from an examination of Hanley’s brain), the aliens tell Marvin that they thought the Skyhook rockets were weapons. The lone survivors of a destroyed world, the aliens instruct Marvin to arrange a meeting of world leaders within 56 days, threatening to take the world by force if he fails.

From there, we enter the typical day-to-day of the science fiction B movie. Various parties bicker, the clock begins to tick down and the humans scramble to create a weapon strong enough to destroy the alien force. To be honest, after the scene on the saucer, the film, up until this point, a quick and enjoyable ride, falters a bit. The pace slows down and all the usual science fiction mumbo jumbo takes over for the next 20 minutes. This is always my least favorite part of these films. Just scene after scene of talking heads and nonsense words strung together in an attempt to sound scientific. For example, we learn that the aliens are wearing suits made of solidified electricity, that these suits offer the aliens enhanced vision and superhuman hearing. I suppose complaining about “solidified electricity” in a movie about flying saucers is pointless and yeah, you’re right, it is, but all these scenes just slow the film down and delay the spectacle we all know is around the corner.

And there is spectacle here, all courtesy of the amazing Ray Harryhausen. I am a massive fan of stop motion animation, especially Harryhausen’s work. It’s a shame that Harryhausen wasn’t given the chance to create an interesting race of alien creatures but the flying saucers he created for the film are classic examples of alien spacecrafts. Watching the saucers buzz around the sky, passing over familiar world landmarks, shooting their death rays at anything that moves… it’s just flat out iconic stuff and is absolutely a joy to watch. EARTH VS. THE FLYING SAUCERS had a higher budget than most sci-fi B movies made in the 1950s, but even the more expensive films tended to use flat, dull miniatures for their spacecrafts. Harryhausen’s saucers have real weight to them. Animating these machines with all their whirring, rotating bits and pieces must have taken a long, long time but the overall effect is just classic and fun to watch. Once the battles start happening and the buildings start going boom, EARTH VS. THE FLYING SAUCERS becomes pure, unadulterated B movie fun.
Posted by David Grant at 10:16:00 PM
Email ThisBlogThis!Share to TwitterShare to FacebookShare to Pinterest
Labels: 31 Days of Horror, Earth vs the Flying Saucers