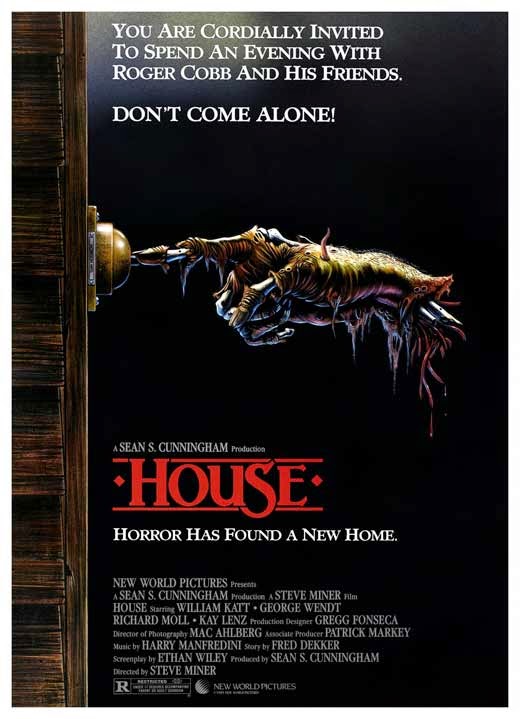 What happens when you mix FRIDAY THE 13th alums Sean Cunningham, Steve Miner and Harry Manfredini together with The Greatest American Hero, Norm Peterson and Nostradamus “Bull” Shannon? You get HOUSE, a POLTERGEIST-inspired comedy horror film released by a post-Roger Corman New World Pictures in 1986. I remember really liking this movie when I was a kid. It had monsters and guns and neat special effects pieces like bathroom mirrors that led into an abyss. I was seven years old when I saw HOUSE in the theaters and I absolutely loved it. Today? Yeah, not so much. Watching the film for the first time in well over a decade, I found myself really struggling to make it through the whole film.

Roger Cobb is a successful horror writer. His next book, much to the chagrin of his editor, will be an autobiography about his experiences during the Vietnam war. His life isn’t going so well at the moment. His wife, a popular actress, left him and his young son disappeared a few years back. To make matters worse, his aunt, the woman who raised him after his mother died, hanged herself in the bedroom of her large, three story house. Not wanting to sell the property, Roger moves in. He remembers that his aunt used to claim that the house was haunted. Turns out, she was right. Roger begins seeing visions of his aunt and his son (who mysteriously vanished in the swimming pool out back one afternoon).

Then things start to get really bad. A giant monster attacks him when he opens a closet door, various gardening tools fly through the air and several monsters try to kidnap a young boy left in his care. And not only is all of this weird shit happening but his neighbor thinks he’s gone crazy, the deadline for his book is quickly approaching and Roger is beginning to have vivid nightmares about Vietnam, specifically about his old buddy Big Ben, a loudmouth grunt Roger abandoned on the battlefield.

There are three major problems with this film.

Firstly, for a movie chock full of stuff happening, HOUSE sure is boring. The film starts off strong and ends satisfyingly enough, but the second act just moves at a snail’s pace. Part of the problem is that there is no one except Roger through most of the movie. The neighbor, Harold, pops in every once and awhile but really only figures into one single set piece. There’s a good looking but obnoxious woman across the street that unceremoniously dumps her child on Roger one night and a very brief scene with two cops but that’s it. It’s just Roger. All the time. And while William Catt is more than able to make Roger a likeable enough guy, there really is only so much you can do with one protagonist and a bunch of rubber suit monsters.

And that’s the second problem with HOUSE. The ghosts are simply awful. I really wish they would have at least ripped off the ghosts from POLTERGEIST instead of random plot elements that don’t even fit naturally with the narrative. When I say “rubber suit monsters”, I mean rubber suit monsters. That’s what they look like. Think of the ghostly creature in the doorway from POLTERGEIST. Nice and scary, right? Well, here you get a thing in the closet that looks like something out of a low budget THE THING knock-off, a couple of troll like monsters that inexplicably try to drag a child up a chimney and a female demon/ghost/monster thing that looks a bit like the Deadite Ed from EVIL DEAD 2 in drag (not to mention there’s a bit of disembodied hand mayhem in HOUSE as well, another nod to Raimi’s film). I understand that Miner and Co. were attempting a horror comedy but was there really a need to make every paranormal thing look so damn ridiculous?

The Vietnam subtext doesn’t quite fit either. Turns out that after Big Ben was shot by some enemy soldiers in the jungle he didn’t die. Roger, refusing to mercy kill his friend as he lay wounded, inadvertently left him to be tortured for weeks by the Vietcong, eventually dying in a POW camp. So naturally, Big Ben was the one who kidnapped Roger’s son and the final fifteen minutes of the film features a skeletal Richard Moll smacking Roger around. But then the oddest thing happens. HOUSE decides to rip off A NIGHTMARE ON ELM STREET. Roger decides that he’s no longer afraid of Big Ben (and here I thought he felt guilt, not fear) and voila! he’s able to vanquish the ghosts via hand grenade.

And that, ladies and gentlemen, is the final problem with HOUSE. It makes no damn sense. The internal logic of the film is busted beyond repair. All this rubber suit bullshit and hyperbolic screenwriting could have resulted in a fun movie. Yeah, HOUSE isn’t funny and it isn’t scary but who cares, right? It could have at least been entertaining. But it isn’t. Because it’s too long, the effects are shit and the whole thing makes no damn sense. HOUSE was very popular when it came out in theaters, turned into a minor cult classic when it hit VHS and then died a slow death. Today, the film is all but forgotten. It’s dead. And just like Jud Crandell said, “sometimes dead is better”. So don’t bother with HOUSE, folks. Leave it be. Just move along. Nothing to see here.
Posted by David Grant at 9:52:00 PM
Email ThisBlogThis!Share to TwitterShare to FacebookShare to Pinterest
Labels: 31 Days of Horror, House