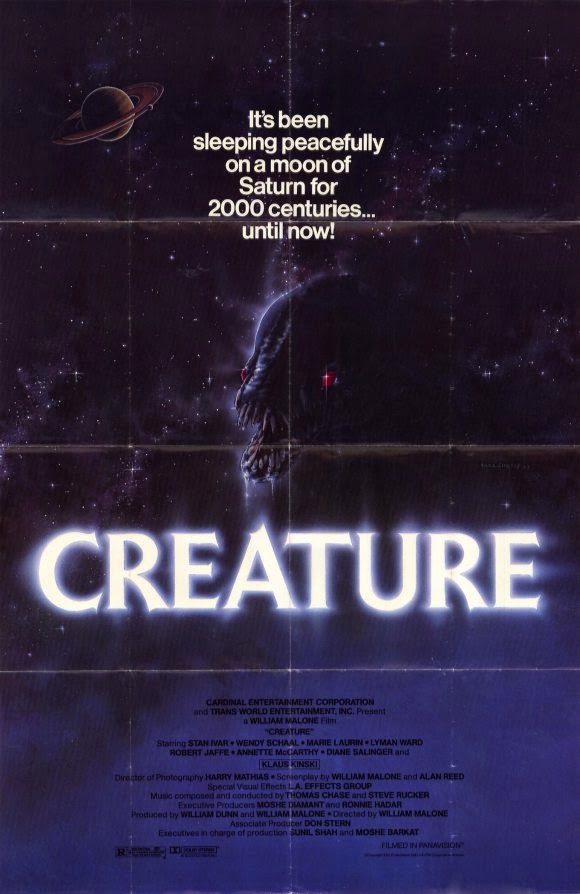 This movie is bad. And I mean bad. CREATURE is yet another ALIEN knock-off, a visually uninspired, intellectually bankrupt yawnfest that chronicles the struggles of a salvage crew trying to survive an attack by a ruthless alien being. You’ve seen this movie before and you’ve seen this movie done better before. There is simply no reason to watch it unless you’re that desperate for something to do. If that’s the case, might I suggest staring at the wall? Your time will be better spent.

You might think I’m being overly negative. You might even think I’m exaggerating. No, dear reader, I am not. CREATURE runs an excruciating long 87 minutes. At least 60 of those minutes are spent watching people talk, watching people walk through the same dark corridors (and I do mean dark; it’s like someone in the production meetings said “you know what’s scary? Not being able to see fuck all”), walking through the same bits of badly dressed sets, watching people react to things off screen, watching people leave one area of the ship only to run back to that area of the ship a scene later. This is the ultimate example, the Grade A gold star top-of the-class example, of a poorly paced, overly padded narrative.

The only novel idea the film has was to mix the zombie and pod people movies with ALIEN. The title creature (which is about as frightening and convincing as a hand puppet) can produce little parasites. After killing a human, it can place those parasites on the head of the corpse, reanimating it. It can then control the body, a useful plot mechanism that allows so many “follow me into this dark room, buddy” scenes that I quickly lost count, and use it to attack people aboard the ship. Unfortunately, that means you’re spending more time watching badly made up zombies attack the protagonists than you do watching the alien attack the protagonists. It’s disappointing but ultimately preferable. The alien design is just that bad.

Oh, did I mention Klaus Kinski was in this movie? Because he is! For a whole 20 minutes. And did I mention that the film is culturally aware? Because it is! One of the characters recalls seeing a movie where a bunch of scientists in the Arctic use electricity to kill a giant carrot so maybe they should try that too. Seriously. That seriously happens in this movie. Now I would have been perfectly fine had CREATURE decided to have more of those moments. Just go completely insane with the story. But no, it meanders along from scene to scene with no real momentum, just padded to death with endless shots of people walking through poorly designed space ship hallways which are nothing more than rooms full of plastic contraptions hot glued to the walls and spray painted silver. Bava’s PLANET OF THE VAMPIRES looked more convincing than this. Hell, the mother*@king Satellite of Love looked better than this.

I just can’t. I can’t even do it anymore. I’m just going to walk away now. I’m just going to walk away and forget I ever watched this film. I could have watched something much better but no, I thought ”hey, I’ll pick a random movie off of Netflix and just give it a try. How bad could it be?” I sh.... .. .... .. .... . ..
Posted by David Grant at 8:01:00 PM
Email ThisBlogThis!Share to TwitterShare to FacebookShare to Pinterest
Labels: 31 Days of Horror, Creature