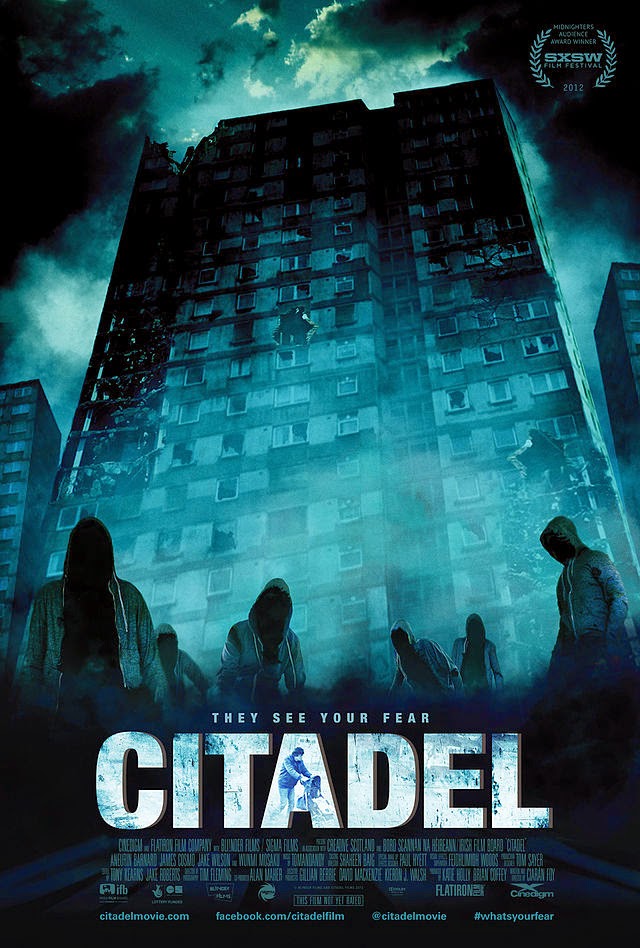 The opening is pure Argento. Tommy, a young man with a very pregnant wife, finds himself stuck inside an elevator that isn’t working properly. Looking through the small glass panel on the elevator door, he sees three young children, all decked out in hooded sweatshirts, attack his wife in the hallway. Unable to get the door open, the elevator descends to ground floor. Tommy rushes up the stairs but is too late. The attackers have fled and his wife, beaten and bloody, lies on the hallway floor, a dirty syringe sticking out of her stomach.

The hospital staff manages to save the baby but the attack has left his wife comatose. The film moves months into the future. Tommy’s wife is taken off of life support. The attack has left Tommy with severe agoraphobia. He can barely manage to get to his support group meetings. His mental health is assaulted yet again when a priest warns him that the children will be back, this time to take his daughter. A nurse named Marie does her best to help Tommy recover but a little later, the attackers return to Tommy’s apartment, ransacking the place and attempting to kidnap his baby. After another attack results in the death of Marie and the successful kidnapping of his child, Tommy returns to the priest seeking help. The priest tells him that these children are not really children anymore. They’re something else, something feral and dangerous. He says that they can see fear and he tells Tommy that the only way to end the terror is to literally destroy their home, a dilapidated apartment complex in the poverty stricken area of the city.

First things first: you could make an argument that CITADEL belongs to the dystopian horror film. The entire film takes place in a cold, crummy city. Everything reeks of decay. Syringes lie around the streets, graffiti is everywhere and the lights are always going out. There doesn’t seem to be anyone left aside from Tommy and a handful of others. Every frame is empty and open, lifeless and cold. It’s a beautiful film, make no doubt about it, but the atmosphere of decay, poverty and loneliness is downright stifling. I’ve never seen a film with the ability to induce claustrophobia in outdoor environments like this film has. Atmosphere is a very important part of any horror film. Here, it’s everything.

The philosophical underpinnings of the narrative are troubling, if not a bit underdeveloped. The conflicting ideologies of Marie, the good liberal nurse who thinks the children need “understanding”, is put up against the beliefs of the unnamed priest, a man who refers to the children as a “cancer” and whose solution is to destroy them in a controlled blast. That the children are revealed to be the offspring of abandoned parents, one of whom is a main character here, is telling. These are children who have grown up in poverty and despair, abandoned by their parents and by the system. If they’re a cancer, they’re a cancer we caused. While Marie would have reform, the priest would have fire, an attempt to bury the repercussions of society rather than deal with them.

Taken on a surface level, the film operates incredibly well as a piece of horror cinema. The “hoodie horror film” that took hold of UK cinema awhile back produced more than a few good films, the best being EDEN LAKE, HEARTLESS and THE DISAPPEARED. CITADEL also has a strong resemblance to ILS, the great French horror film about a couple terrorized in their home by hooded youths, all for the crime of being home one night. While the villains here are almost turned into supernatural entities (they can see and smell fear, at times possess superhuman strength and are outfitted with demonic-looking contact lenses), the very real fear of home invasion and violent crime keeps the film grounded in the realm of reality. Shot entirely on hand held cameras, the film has a raw immediacy and an uncanny ability to unnerve through sound and suggestion. It might not have the visceral punch of ILS or EDEN LAKE, but CITADEL is as effective a horror film as you’re likely to see.
Posted by David Grant at 3:24:00 PM
Email ThisBlogThis!Share to TwitterShare to FacebookShare to Pinterest
Labels: 31 Days of Horror, Citadel