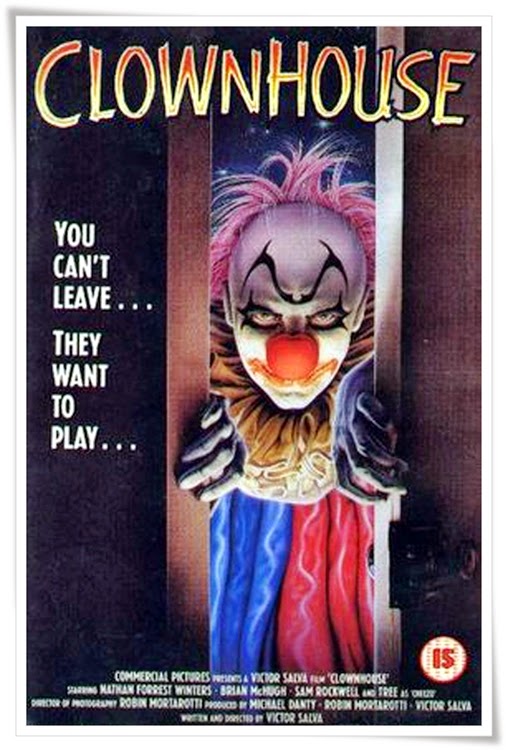 While I don’t personally suffer from coulrophobia (that would be the fear of clowns) I can understand why someone would. Clowns are just weird, man. Just walking, giggling, smiling balls of freak show weirdness, like mimes with mental disorders. I remember seeing CLOWNHOUSE at the local video store when I was a kid and not really wanting to watch it. Not because I was afraid of being scared. I just didn’t like clowns. I still don’t. They’re just weird, obnoxious things. I have a feeling that the folks behind the scenes of CLOWNHOUSE were banking on the coulrophobic reaction of the viewers to give their film some extra frights. I have to imagine that’s the case because CLOWNHOUSE sure isn’t frightening to those of us without that particular phobia.

The film focuses on three brothers, Casey (the youngest), Geoffrey and Randy (the oldest). When their mother heads off to visit relatives, she leaves the three boys alone for the night. Randy drags his brothers to the local carnival so he can get some face-on-face action with a local cutie. Casey isn’t thrilled. Suffering from a major case of coulrophobia, Casey freaks out when a clown tries to haul him on stage for a performance. Geoffrey, intensely protective of his younger brother, calms him down and the three boys head off home. Shortly after, three escaped mental patients (enraged from having their “carnival privileges” revoked by the doctors) kill the carnival clowns, don their costumes and head off into the night.

And that’s about it in terms of story here, folks. From that point on, the film becomes a collection of set pieces and false scares as the three psychos begin to terrorize the brothers. It’s obvious that HALLOWEEN was a big influence on Victor Salva, the director of the film, and it’s clear what Salva liked best were all the times Michael Myers appeared in the background, disappearing just in time for the character he’s stalking to turn around. The film is absolutely littered with those scenes. At least every five minutes, a clown shows up in the background and BLINK oh no he’s gone! That’s the one trick this film knows and it uses it to death. Also, it should be noted that this is absolutely NOT a slasher film. There are very few deaths and very little blood. This is supposed to be more of a slow burn suspense film. Unfortunately, the damn thing can barely do a jump scare correctly and lacks the proper finesse to set up anything close to tension.

In fact, the most frightening thing about CLOWNHOUSE is the story of its production. Once the film wrapped production, allegations were made against Salva. Nathan Forrest Winters, the 12 year old actor playing Casey, alleged that Salva had sexually abused him all throughout the production, even videotaping several of the encounters. Salva pleaded guilty to the charges and was sentenced to three years in prison, though he would be released after 15 months. Knowing this, watching CLOWNHOUSE took on a whole new feeling. The actors playing the brothers, all children, are often shirtless in the first half of the film. Several times, the camera crawls along their young bodies. There’s a scene of all three in the bathroom together, Casey naked in the tub while his brother talks about pubic hair. It’s like a pedo version of a David DeCoteau movie. And I’m sure what I was seeing on screen was not really there for the purposes of deviant eroticism but I couldn’t shake that nasty feeling as I watched it.

Overall, CLOWNHOUSE is just a tepid, run of the mill horror thriller. While there are not very many completely egregious things to complain about, the slow pacing and dull narrative leaves little to enjoy. I suppose if you just want something to pass the time with, you could do a lot worse. But you could also do a lot better too. So this should be considered a “last resort” film.
Posted by David Grant at 8:56:00 PM
Email ThisBlogThis!Share to TwitterShare to FacebookShare to Pinterest
Labels: 31 Days of Horror, Clownhouse