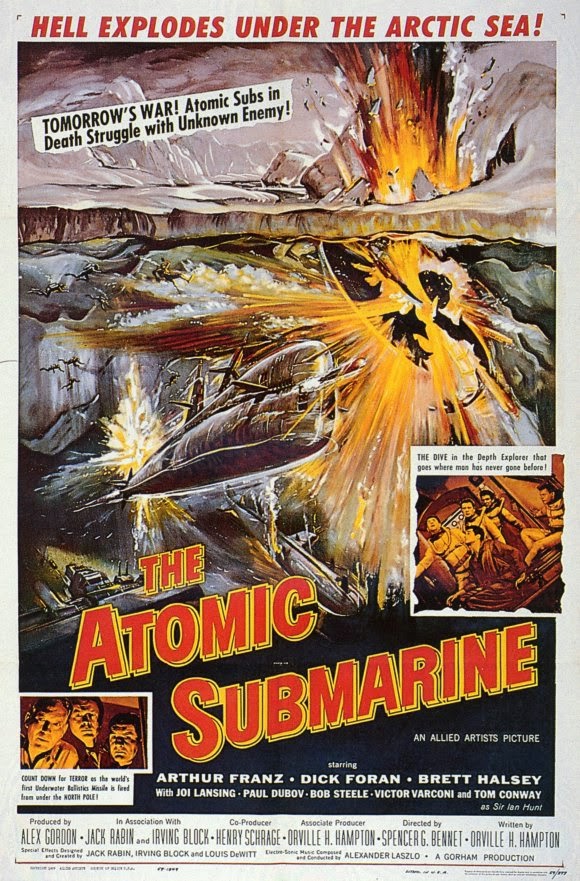 Despite my love for all things 1950s sci-fi, I simply could not enjoy THE ATOMIC SUBMARINE. Notwithstanding an interesting premise involving the unexplained destruction of ships in the cold waters of the Arctic, the film is a slow going, ultra cheap snoozefest with little in the way of eye candy and even less in the way of a narrative. Once our intrepid band of scientists and military men hop aboard a cutting edge nuclear submarine and head off in search of whatever is lurking in the icy depths, I expected the film to make up for its snail paced first 20 minutes. Instead all I got was endless talking and special effects that barely reach the level of PLAN 9 FROM OUTER SPACE.

The biggest problem with THE ATOMIC SUBMARINE is its complete lack of scope. We spend all but a few scenes aboard the submarine. Given the sheer size of the ship, we would expect variety in the set design. Instead all we get are dialogue scenes set in the same half a dozen rooms. There are no large banks of monitors or familiar sci-fi doodads and gadgets. It’s just metal walls with nozzles, pipes and blinking lights. The undersea special effects are disappointing, just children’s toys on wires or floating in what is obviously an oversized aquarium. One of the great pleasures of these films is the spectacle. Even if it’s cheesy, even if it’s poorly done, those scenes are the backbone of B movie sci-fi films. There is nothing spectacular here. It just reeks of a rushed job.

The tried and true narrative formula is also neutered. The Alien Invasion movie gets much of its immediacy from the threat of planetary annihilation. THE ATOMIC SUBMARINE, like GODZILLA RAIDS AGAIN, drops the ball by reducing the stakes to a ridiculous level. In GOJIRA, the threat is a giant monster destroying an entire city. In GODZILLA RAIDS AGAIN, the threat is a giant monster destroying a fishing factory. It just doesn’t have the same kind of effect. Even though the alien in THE ATOMIC SUBMARINE reveals in the last ten minutes that it plans on returning to Earth with an army, the basic thrust of the film is that the alien spacecraft has been destroying vessels along a shipping route, reducing the threat from global annihilation to minor economic instability. Again, hardly the more effective angle to play.

The main dramatic thrust of the film could have been interesting. The surly commander, dead set on destroying the alien threat, finds himself in conflict with a pacifist engineer. This could have been played out more in the narrative but the film only casually flirts with this bit of sub plot. At the end of the film, the pacifist just shrugs his shoulders and says “well, guess you were right” and that’s that. It’s just dropped. The entire film is like that. An interesting angle or opportunity arises and is totally squandered. If only there was a bit more money involved or a bit more time or a bit more commitment, THE ATOMIC SUBMARINE could have been a cracking bit of entertainment. As it stands, it’s just a waste of time.

Posted by David Grant at 9:44:00 PM
Email ThisBlogThis!Share to TwitterShare to FacebookShare to Pinterest
Labels: 31 Days of Horror, The Atomic Submarine