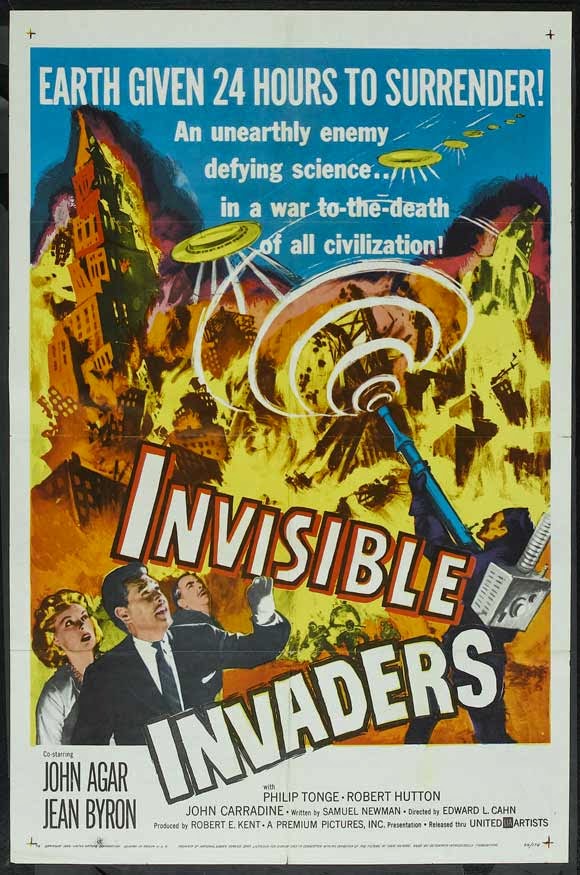 In my review of CREATURE, I noted that one of the few interesting ideas the film had was to make the alien capable of reanimating corpses to use as slaves, but after writing that, I began to wonder where I had seen that idea before. It wasn’t PLAN 9 FROM OUTER SPACE. It was something I saw as a kid, some black and white sci-fi movie that used to play from time to time on cable. A few Google searches later, I found it.

INVISIBLE INVADERS is a B movie made on the cheap by Edward Cahn, a surprisingly prolific schlockmeister with over a hundred movies on his filmography. It begins as yet another anti-science paranoia piece as a freak lab accident kills Dr. Karol Noymann. After Noymann’s funeral, the doctor’s reanimated corpse shows up in the home of Noymann’s colleague, Dr. Adam Penner. The corpse, or rather the alien inhabiting it, warns Penner that its forces will invade and destroy Earth in less than 24 hours unless all the nations on the planet surrender. When that surrender never happens, the invisible invaders descend on the planet, taking over corpses and destroying everything in their path.

Eventually, the military puts together a crack team of scientists, Dr. Penner, his daughter Phyllis and her friend, Dr. John Lamont. Army Major Bruce Jay is assigned as security. They hole up inside a bunker and begin their research. After managing to capture an alien, they run experiment after experiment, running into failure after failure. Then they stumble on the key: sound waves. Using sound guns (yes, sound guns), the crew is finally able to render the aliens visible to the naked eye (as well as turn them into a puddle of muck). They try desperately to contact the military to share this news. Unfortunately, their radio frequencies are jammed by the signals from a nearby alien ship. With the world about to end, they set off to destroy the ship, sound guns in hand.

Now that sounds exciting and interesting but the film really isn’t all that well put together. Much of it is downright laughable, something that would be a problem if this film were attempting to provide anything more than cheesy entertainment. The biggest problem with the film is that it is simply too cheaply made. There are endless scenes of stock footage in the film. When the aliens decide to announce their plans to the people of Earth, they don’t bother using television or radio. That would have necessitated the building of more sets. Instead, they make their way into a hockey game, killing the announcer and using the speaker system to announce their invasion. Not exactly the most effective way of getting your message across, but Cahn apparently had to work with whatever stock footage he could get his hands on (by the way, you don’t have to look hard to notice people clapping all throughout the alien speech). When you have to make your film work around available stock footage, you’re bound to run into problems.

Another big negative is that there is a constant voice over narration. Instead of dramatizing events, this booming, ultra-serious voice just tells us what is going on. Not only is this infuriatingly cheap, it’s also mostly unnecessary. We don’t need a voice over to tell us “the invader, finished with the corpse, left it and again became invisible” if we’re watching it happen on screen. It makes the whole film feel like a reenactment and that sucks much of the immediacy from the film.

But even though the entire film feels like it was made for twenty dollars (face it, making the aliens invisible was really only done to save money) and the zombies - I’m sorry, alien controlled bodies – are just ridiculous looking guys in business suits with pancake make-up smeared on their faces, the film does manage to be an enjoyable piece of B movie fluff. You could do a lot worse than spend 70 minutes with INVISIBLE INVADERS. Yes, it lacks the visual and intellectual audacity that the best science fiction movies contained, but we’re talking about a movie about invisible aliens that dissolve into goo when you blast them with sound waves. It’s fun and it’s goofy. And what more could you ask of a cheap sci-fi B movie? Just turn off your brain and give it a watch.