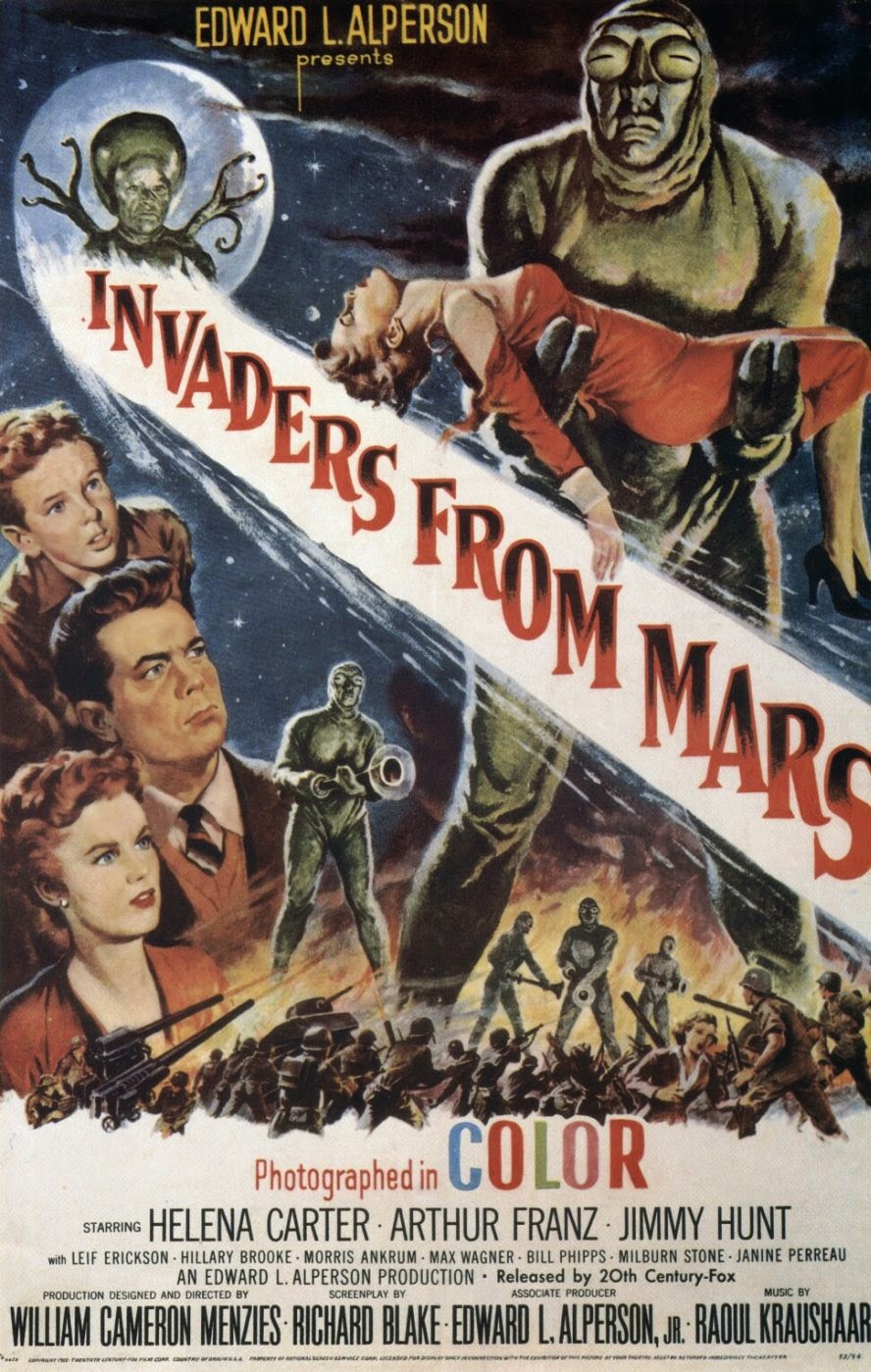 INVADERS FROM MARS uses a standard sci-fi trope as its starting point. A young boy named David sees a flying saucer crash into a sandpit behind his house. His father heads out in the middle of the night to investigate. When he never returns, David’s mother calls the police. Two police officers arrive, take a report and then go looking for the missing husband. While checking out the sandpit, something beneath the surface swallows them whole. A short while later, David’s father returns home. His entire easy going demeanor has changed. He snaps at his son, even smacking him to the floor, and orders his wife around in a belligerent manner. The police officers, somehow still alive, return to the house. But they seem different too. Later that morning, David notices something strange on the back of his father’s neck, a red growth in the shape of an X.

While outside, David sees a neighborhood girl being swallowed by the sandpit. Panicking, David tries to convince his parents that something is wrong. Not having any luck, David runs around town, desperately trying to get someone to believe him. Meanwhile, David’s father takes his mother to the sandpit, allowing her to be swallowed by whatever is below the sand. Out of options, David finally turns to the police. At the station, he asks to see the police chief, only to find that he too is different. The chief has him locked up in a detention cell. With the chief gone, the officer on duty calls a physician, Dr. Pat Blake, to come see David. Pat listens to David’s story. Moreover, she believes him.

Pat calls Stuart Kelston, an astronomer, and together they begin to investigate David’s story. It doesn’t take long before they realize what is transpiring in their town. A flying saucer has indeed crashed, buried beneath the sandpit. Anyone close to the sandpit is swallowed up into the ship. Inside, a race of alien invaders from Mars is surgically implanting mind control devices onto the spines of the captives. Then, returning to the surface, the mind controlled citizens begin targeting military and scientific installations around the town, including blowing up an industrial plant and attempting to assassinate a scientist at a rocket research lab. National security now at risk, the Army begins to roll in. Tanks surround the sandpit while a group of military types enter the saucer with the intent on blowing the whole thing sky high with explosives.

With a child at the center of the film, INVADERS FROM MARS feels a tad bit Spielbergian even if it’s missing the slightly naïve, slightly sentimental tone found in E.T.. It has a real dark side to it. It isn’t afraid to kill a child (offscreen, of course) to make a point and flirts with some pretty sinister thematic elements. The whole thing feels like a nightmare you would have as a kid. The loss of your parents, the hopelessness of being on your own, the utter lack of security… those are genuine childhood fears. Even the set design feels slightly nightmarish. The road leading up to the sandpit looks like something out of a Universal monster movie. The interiors are purposefully designed to exaggerate David’s small frame with large empty hallways and bits of the mise-en-scène that are oversized. This is a trick Hitchcock used quite well in REBECCA (For example, Hitchcock had the doors of Manderlay designed with door knobs inches higher than normal just to accentuate Joan Fontaine’s childlike innocence) and it works really well here too.

If the film has a flaw, it’s the Invaders from Mars. They’re basically just men in green pajamas, outfitted with oversized gloves and shoes, capped off with silly Halloween masks. The alien leader is just a green head in a fishbowl. Not exactly frightening stuff, but the rest of the film is strong, directed with great (almost surrealistic) finesse by William Menzies, and positively filled with evocative shots and memorable moments. INVADERS FROM MARS is one of the defining films of the 1950s science fiction genre and for good reason. It still feels modern despite its 1950s trappings.
Posted by David Grant at 10:41:00 PM
Email ThisBlogThis!Share to TwitterShare to FacebookShare to Pinterest
Labels: 31 Days of Horror, Invaders from Mars