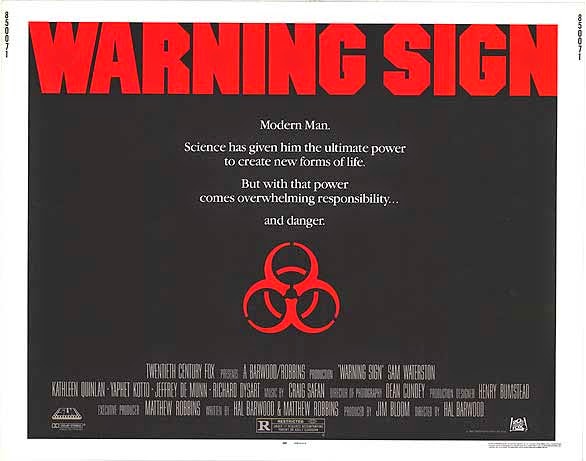 Laced with the same kind cynicism often found in the 1950s science paranoia films, WARNING SIGN walks the fine line between serious thriller and overripe cheese. The plot isn’t anything new. A biological research facility goes into lockdown after a vial of Blue Harvest, an extremely deadly and infectious bio-weapon, is accidentally broken. Trapped inside are dozens of scientists and one nervous security guard named Joanie. On the outside, the military sets up barricades and seals off the building, feeding the media a threadbare cover story while waiting for everyone inside the building to die. That doesn’t sit well with the small town sheriff, Cal Morse, who just so happens to be Joanie’s husband. As the scientists inside the building succumb to Blue Harvest, turning into psychopathic killers as a result, Cal talks Dan Fairchild, a scientist who used to be employed at the research facility, to help him find a cure.

WARNING SIGN boasts an impressive cast, some top notch photography by Dean Cundey and has a narrative that really reminded me of the old science fiction films I love. Unfortunately, it also contains some absolutely abysmal dialogue, plot holes you could drive a third world country through and a final solution to the whole outbreak that borders on the completely absurd. This is a case of massive wasted potential, a film that had everything lined up in its favor but then failed to deliver.

Many people point out that WARNING SIGN seems to be the spiritual ancestor to both 28 DAYS LATER (both films have deadly toxins that turn ordinary people into violent creatures) and RESIDENT EVIL. I see how they can make that claim. It’s tempting to just look at WARNING SIGN as a warm-up for those two films, a proof of concept, if you will. But I can’t do that, because while WARNING SIGN reminds me of many other films, many of them better, I would expect it to have some identity of its own. And there really is just nothing here.

I was constantly reminded of other films while watching it. There’s a little bit of NIGHT OF THE LIVING DEAD. A little bit of THE THING FROM ANOTHER WORLD. There are even shots ripped straight from Cundey’s work with John Carpenter. It feels comfortable and lived in. It never surprised me, never made me guess what was going to happen next. The film just unspooled in front of me, minute after minute, and I simply sat there waiting for the film to finally give me something I’ve never seen before. And when I realized that wasn’t going to happen, I waited for the film to at least turn into something that didn’t feel like a greatest hits collection of my favorite sci-fi/horror moments. Unfortunately, it never did that either.
Posted by David Grant at 10:47:00 PM
Email ThisBlogThis!Share to TwitterShare to FacebookShare to Pinterest
Labels: 31 Days of Horror, Warning Sign